Session with the delightfully frank and insightful actress

We like her. SXSW really likes her. Sally Field took Austin by storm this weekend with her title role in the movie Hello, My Name Is Doris, which premiered at the Fest, and followed up the next day with an onstage conversation with the film’s director Michael Showalter. 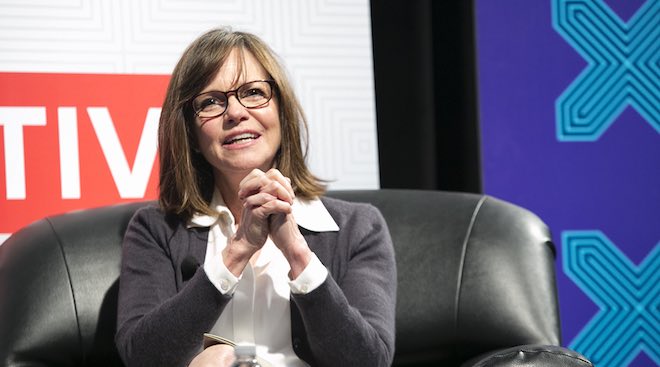 The double Oscar, Golden Globe, and Emmy awards winner was delightfully frank and insightful as she discussed her work as the unconventional title character in Hello, My Name Is Doris and fielded questions from the audience about her craft. The film straddles comedy and drama in its story about a spinsterish woman who begins to come out of her shell after the death of her mother. Doris Miller is a true eccentric with a unique fashion sense who develops a sudden mad crush on a much younger man at her place of employment. The character easily could have been turned into a target for derision or sympathy, but as inhabited by Sally Field, she becomes a complex individual who expresses and invites a variety of emotions. During the filmmaking process, Field said she kept asking Showalter, in regard to the film’s constantly shifting tones, “How is this possible?” The honest answer is that it’s possible because the remarkable Sally Field was playing the role.

Half of the interview session was given over to questions from the audience. To the aspiring actor who asked what interpersonal skills she thought were best for an actor to possess, she shot back instantly, “I think that’s an oxymoron, isn’t it?” before giving a thoughtful answer. And to the questioner who longed for Field to re-team in another movie with her Steel Magnolias co-star Julia Roberts and wondered what form that project might take, Field offered, “a remake of Butch Cassidy and the Sundance Kid – I get the Newman role.” Give that woman anything she wants.

See the Chronicle's interview with Hello, My Name Is Doris director Michael Showalter. Keep up with all our SXSW Film coverage at austinchronicle.com/sxsw/film.