Ted Geoghegan gets gory for We Are Still Here

Ted Geoghegan is a very familiar name to people who write about film, and a regular at SXSW, but not because he’s a noted actor, or a famous filmmaker. Geoghegan is a film publicist, one of those long-suffering souls who tracks down AWOL actors and takes no for an answer from harried journalists.

But with his first feature as a director, the gory supernatural horror We Are Still Here, he gets to see the PR machine from the other side. He told the Chronicle, “There was this little part of me that says, ‘You know what, maybe I could offset some of the costs of the trip by taking one movie as a client.’ But the more I thought about it, the more I thought, ‘I gotta be the director this time.’” 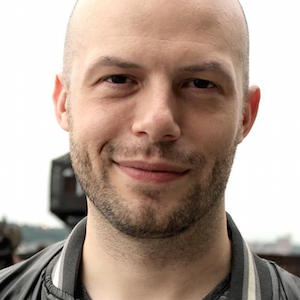 Make that writer and director of this Lucio Fulci-meets-M.R. James haunted house tale. He said, “In the ever-changing production landscape we’re in now, it doesn’t hurt to wear a lot of hats.” This may be his debut as a director, but it’s far from his first time on set. With 10 writing credits before We Are Still Here, a stack of producer nods, and even a few acting roles (yes, he is Man on 7 Train Platform in Sharknado 2: The Second One), he actually started off as a filmmaker in rural Montana.

“When I moved out to New York, I had quite a few people here meet me and be surprised. They’d say, ‘I know who you are. Who’s your publicist? I don’t feel like I should know you from any of the projects you’ve been involved with, so you must have a really good publicist.’ Well, I don’t, so I guess I’m my own publicist.” This quickly parlayed into a second career in promotion, but he doesn’t feel conflicted. “While the majority of directors I know do have a day job, it doesn’t happen to be in the film industry. They work in an office, or a restaurant. It just so happens that mine is in film.”

We Are Still Here follows a middle-aged couple (Barbara Crampton and Andrew Sensenig) who move to a rural New England community to heal after the accidental death of their son. However, the Victorian house they have bought comes with dark and terrible secrets, and they soon realize that they may not be alone in their grief. In part, he was inspired by performances by middle-aged actors in horror, like George C. Scott in 1980’s The Changeling, or the works of HP Lovecraft, whose protagonists were usually older academics. “Everyone in the film is an adult, and this is about adults making adult decisions,” he said. “I love the idea of having people in their 40s or 50s or 60s, coming face to face with something they’ve spent their entire life telling themselves doesn’t exist.”

Geoghegan started writing the script for another director but, he said, “As I wrote it, I started getting more and more excited about, until it reached the point where I was like, you know, I think I want to do this.” It was the underlying tale of parents in mourning that finally convinced Geoghegan that this was the story he wanted to direct. He said, “The majority of the things I have worked upon were slasher movies or very campy, goofy, off-the-wall stuff, and I wrote this one with the intention of it being a little heavier, and it had a bit more heart to it. It was just something that I felt very close to, and it reached the point where I thought, I don’t know if I want to hand this to someone else.”

A lot of first-time directors find the casting process daunting. “Thankfully,” Geoghegan said, “I had enough connections from folks that I’d worked with, either as a writer or producer or a publicist, that people were at least willing to read the script and start the discussions.” That included Crampton, who he first met when he was doing PR for 2013 home invasion thriller You’re Next. He admits that he grew up with a “massive crush” on the star of Re-Animator and From Beyond, “as I think most horror fans of the 1980s did.” They soon became firm friends, “so when I started writing the script, I had written that role explicitly for her.”

The cast depends heavily on actors that Geoghegan felt where tragically underrated, such as Upstream Color’s Sensenig (“I feel like people will know him from hundred of commercials. He’s just one of those people you see and go, oh. That guy.’”) and Lisa Marie (Sleepy Hollow, Mars Attacks) as their psychically attuned friend May Lewis.

As for the role of May's husband, that part was written for another personal friend: Larry Fessenden, the uncrowned king of New York indie horror. While literally dozens of directors have given the writer/producer/director cameo parts in their films, Geoghegan envisioned something more for Fessenden. “He’s an immensely talented actor, and he has just such an expressive, incredible face, and I just wanted him to have a big, meaty role. If I had it my way, in my next movie, I’d have him in every frame of the thing.”

We Are Still Here