The filmmakers behind the eco-doc take us to the river

Our celebrity encounter was the sweetest of the entire conference, a chance to engage with the star of the film Yakona. Her name? The San Marcos River. The view from below. Directors and cinematographers Anlo Sepulveda and Paul Collins shot over 300 hours in and along the San Marcos River. (production still yakona.org)

The conference, the lines, the traffic… all drifted away, as we glided along the San Marcos River in a glass-bottom boat with directors Anlo Sepulveda and Paul Collins of Yakona to meet their darling starlet, a river with history and secrets in every ripple.

She's quite a looker, with sturdy slopes of Texas limestone to her west, and marshy, flowing wetlands to her east. She's home to bass, tilapia, the San Marcos Salamander, and an array of snappy turtles. Her crystal, see-through surfaces reveal burbling springs, ancient sources of life, sustenance, and an endangered species or two. 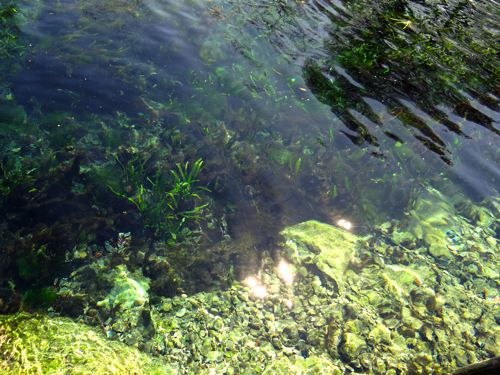 As if the film Yakona itself weren't trip enough – the movie spans thousands of years of river evolution in glorious non-narrative form, a visual dream courtesy of gorgeous underwater photography and reimaginings of history's strides – the filmmakers invited media to come to the river to see for themselves.

She's been through a lot, the San Marcos: over 10,000 years of human habitation, colonization, settlements, even a theme park with mermaids and a swimming pig, and last but not least, the bobbing bottoms of Bobcat bro-hams. The film ably covers all of this and more without the constraints of conventional narrative structure. Clearly, it's a love story (co-director Anlo Sepulveda has the warm Austin summer ode Otis Under Sky, which first screened at SXSW 2011, under his belt) set in nature and calling us to appreciate what we have. Our tour guide for the boat ride, a Texas State student named Isreal, filled us in on all of the details that the film laid out. 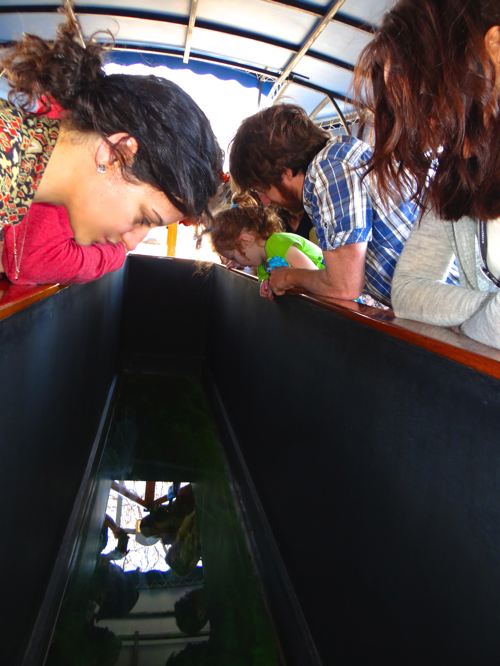 The site we explored along Spring Lake, on the upper San Marcos River, once housed the roadside attraction, Aquarena Springs, a small (by today's standards) Texas theme park that had come to define San Marcos almost as much as Texas State University (née Southwest Texas State). The park closed as a tourist attraction in the mid-1990s as efforts to allow the river to get back to her natural state culminated in 2012 with the removal of key landmarks of the park. Sepulveda, Collins, and crew captured the deconstruction and rebirth in this sort of anti-( or reverse?) Koyaanisqatsi tale. The San Marcos River is the area's free, natural themepark (photo by KXM)

Alas, our journey was brief. We had but an hour on the river, before our commitments at the conference called us back. I had only a quick five minutes to chat with the crew and wanted to know about the access and support the received from the local community, considering their non-narrative approach and how nostalgic San Marcos is about the old themepark (see video of questions below).