Here's what you missed from the capacity event at the Paramount 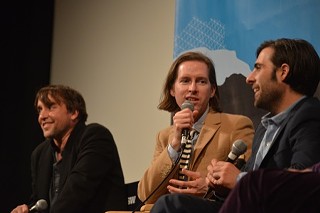 In Wes Anderson's charming romp The Grand Budapest Hotel, the narrative unfolds through a series of nested narrators, of sorts. First a young girl in a cemetery, then an author in his prime, and finally an elder statesman of a lobby boy guide us through the story, one era at a time.

That's really all I'll say about the film here – for our complete review of what I consider the Wes Andersoniest Wes Anderson film of them all, you should read Kimberley Jones' take tomorrow – but I think it's important you understand that particular narrative structure, because a veritable replica of that same matryoshka doll hit the Paramount Theatre before South by Southwest's first and only screening of the film.

First, SXSW Film Director Janet Pierson came out, promising a real treat that she admits to having been waiting 10 years for. (A note to SX: To borrow a quote from the film, "Holy shit, you got him.") She introduced Austin's own Richard Linklater, who had been called in to moderate the post-screening Q&A and who in turn introduced the man of the hour, "singular cinematic artist" Wes Anderson himself.

Anderson, it turns out, may have had something of a complex about screenings in Austin, after his first Bottle Rocket screening in UT's Hogg Auditorium ("before most of you were born") was attended by a scarce nine people. By the end of the evening, after several left during the credits, "we risked outnumbering the audience," Anderson deadpanned. One look at the capacity crowd seemed to slightly assure him that that was at least less of a risk tonight.

That's right, the director is every bit as charming as his writing would suggest (and it doesn't hurt that his camel suit and striped tie seemed plucked straight from the closet of a Tenenbaum). And so we all settled in for the 99-minute funicular ride that is The Grand Budapest Hotel.

I say settled, but of course that belies the tremendous and exuberant audience response that rang out for every celebrity entrance, every just-within-frame physical comedy gag, every fantastic moustache (seriously, at least four should've gotten their own billing). I think we were all just so excited to be indoors and seated and not getting rained on, considering how long we'd been waiting. The volunteers had already handed out all the queue cards and buffer cards a full two hours before the show was set to start, and the badgeholders line wrapped up Congress, around Eighth, down Brazos and back by 6:45pm. Anderson was clearly among a group of admirers here – 1,200 strong – so it makes sense that very few left their seats when the credits rolled and the gang returned for the Q&A.

Linklater and Anderson returned to the stage, welcoming actor Jason Schwartzman and longtime music supervisor Randall Poster to the other two directors' chairs. What follows are some of the highlights of their hourlong chat.

• Talking about the origins of the story, Anderson said he and a friend had once written a short story about a mutual friend that had a similar lead character feel, but it wasn't in the past and wasn't in a hotel. When he found Stefan Zweig's novels, that story finally found a place.

• About those filming locations: The film was mostly shot on-location in Görlitz in Saxony, right between Germany and Poland. Anderson figures 75% of the movie was shot within 12 minutes of that small town, but there was also a full set of miniatures in a studio in Berlin.

• All the actors were living together in a hotel during shooting, and Schwartzman commented that you'd look around at dinner and you just "can't believe the company you're in." "We don't pay the actors," joked Anderson, "but we have a very good cook." Also, apparently, a solid reference library, which Anderson stocked with books and movies for the actors to peruse.

• This was Schwartzman's first time getting to watch the final cut, and when asked how he felt afterward, he said: "Just joy, happiness … I'm a fan of Wes's movies so much, and to see it for the first time here in this room, it was breathtaking. … It's like a nutritious hit of a movie. … It's like, for me a little, if you were almost dead, it's just [huge gasp]." Anderson: "Why were you almost dead?" Schwartzman: "It's a metaphor that went bad."

• Schwartzman got another few jabs and jokes in throughout the evening, including a comment that fell flat about Anderson "pushing the envelope" but more like "a manila folder." See also: his pun about the newest entry into the company being a "Revolori-ation."

• He wasn't the only one on his toes, though: When Linklater asked the actor what the difference between shooting something like this and something like Rushmore was, the actor stalled at first, saying he didn't know. Cue Poster chiming in with: "Screentime."

• The gang talked at length about the music in the film, including their orchestra of Russian balalaikas, Alexandre Desplat, mountain horns, and yodeling – the latter of which you might recognize from Werner Herzog's Heart of Glass (1976).

• Self-deprecating Anderson remarked that he "start with an especially small toolbox," in response to a Linklater comment that the director's toolbox seems to expand with each film. But he did concede that doing Fantastic Mr. Fox "changed the way I make movies." "I don't feel like a puppet," chimed Schwartzman, but he conceded the director's affinity for "more challenging blocking" (read: completely physically impossible movement) has increased since then.

• On The Life Aquatic with Steve Zissou: "We were $8 million over budget … Whose $8 million was it? I wouldn't do that again."

• On those insane moustaches: Bill Murray "had grown a more extreme moustache that had to be reduced on location," said Anderson, which we fully believe.

• Wes Anderson, on working with Ralph Fiennes: "If he wants to frighten you…"

• The director on sequels: "When I think about doing it, I think about the ones I've done with Jason." Schwartzman assured us it's a mutual admiration society, saying of Anderson: "He's my mentor and dearest friend. … Because we have an archive, I feel like there's a shorthand" between the two on set that allows them to "get to the work more quickly."

• Apparently, Jeff Goldblum occasionally practices his lines by singing them, complete with "pretend piano on his lap."

• On the forthcoming tribute album: "We have the attorneys on it," straightfaced Poster, before saying, "No, we're looking forward to it." "I wasn't informed," said Anderson.

• Tips for those who need more: You'll find many of the inspirational photos in the Library of Congress' Photochrome Collection ("the Google Earth of 1905," summed Anderson), both filmmakers on stage encouraged the watching of the entire Criterion Collection (which includes six Anderson titles), and Anderson put particular recommendations in for Monte Carlo, Love Me Tonight, 1930s Hitchcock like Sabotage and The 39 Steps, and of course Torn Curtain, from which he plagiarized borrowed a scene for Budapest.

Pierson finally snuck back onstage at 11:56 to pack back up that nesting doll and encourage us all to leave promptly – a rescheduled screening of The Raid 2 was slated to start in four minutes (sorry, guys), but even cut short, I suspect many of those thousand-plus fans went home with a yodel in their head and a breath of life in their chests. Simply nothing beats that much magical Wes Anderson in one night.