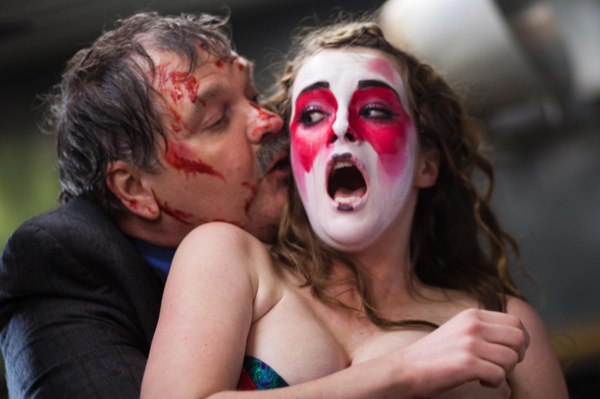 Mixing bloodshed and Broadway, horror musical Stage Fright balances Carrie sight gags with xylophone comedy. It begins on a night 10 years ago, when Broadway star Kylie Swanson (Minnie Driver) is viciously murdered by a masked stranger. A decade later, her children Camilla (Allie MacDonald) and Buddy (Douglas Smith) are cooks in a summer music camp run by their mother’s now-humbled producer (Meat Loaf in a Gilbert & Sullivan-esque portrayal of ruptured pomposity). Desperate to restore his ailing career, he decides to re-enact their mother’s final show with the overly chirpy kids of the camp. That is, until more bodies start piling up. But, hell, the show must go on!

Can horror and musicals really mix? Well, Sondheim pulled it off in Sweeney Todd, and Stage Fright deliciously adds hilarity to the already rich mix. Writer/director Jerome Sable (“The Legend of Beaver Dam”) finds kissing cousins in Freddie Kreuger and the Phantom of the Opera. He keeps the bloodshed gross if sparse until a final massacre that’s a clear nod to summer camp classic The Burning, while co-composer Eli Batalion’s ear for subversive show tunes makes this the best unconventional operetta since South Park: Bigger, Longer, and Uncut.