While on its surface Wild Canaries is a comedic murder mystery, it’s also about the anxiety that accompanies commitment, New York real-estate politics, and a little bit of sexual confusion. 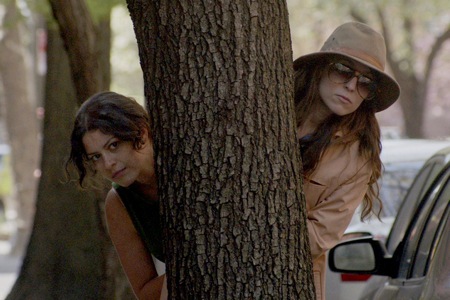 The film introduces Noah (writer-director Lawrence Michael Levine) and Barri (Sophia Takal, Levine’s wife) as a recently engaged pairing of yin and yang: She’s a flibbertigibbet who exudes joie de vivre, and he’s a 36-year-old curmudgeon grasping desperately at his freedom. When their elderly upstairs neighbor dies, the ruptures in the couple’s relationship are thrown into relief as Barri, convinced the neighbor was murdered, becomes a Brooklyn version of Inspector Clouseau (and is only slightly less bumbling). She’s joined in her exploits by their hot roommate Jean (Arrested Development’s Alia Shawkat), simultaneously stalking the dead neighbor’s son, Anthony (Kevin Corrigan) and the building’s dissolute owner, Damien (Jason Ritter). While they’re sleuthing, Noah’s vulnerability is made visible through a sustained series of assaults on his body.

There are laughs aplenty here, and a pretty solidly suspenseful plot, although there is some business with plaster casts that veers toward the ridiculous, and the final exposition is clumsy and a bit leaden.