Giving as Good as He Gets 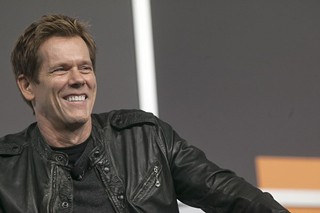 So of course the cavernous Ballroom D at the Austin Convention Center was filled to standing-room-only on Saturday, because Kevin Bacon was one of the presenters of this panel on the phenomenon of Six Degrees.

Everyone wants to be in the same room as any celebrity, it seems – maybe especially when it’s a celebrity renowned, in part, for that game of how-far-removed-is-another-person-from-this-guy?

Not to take any props away from the man, who’s done some damned fine work onscreen before and after the whole “Six Degrees of Kevin Bacon” thing started as a sort of drinking game among three college students at Albright College in Pennsylvania. One of those student originators, Brian Turtle, led this panel, introducing the gauntly handsome and affable Bacon, as well as guests Lance Ulanoff of Mashable, The Guild’s Felicia Day, Maisie Williams from Game of Thrones, who spoke of their experiences of the Six Degrees and lent a few more lumens of starlight to the discussion.

Also speaking from the stage was Dan McCabe, the self-identified “Most Boring Person on This Panel,” who runs Bacon’s philanthropic organization SixDegrees.org. More of the panel’s talk addressed that nonprofit initiative’s efforts (since 2007 it’s raised around $5 million to support a diverse array of charities) instead of pimping the celebs’ current media projects, which made the whole thing seem classier than it might have, and the accompanying talk-show badinage served to further confirm the ginger-haired Ms. Day's place as one of the most adorable geeks on this planet. And now here’s the aftermath of the brief event, which might see an increase of the goodness promoted by SixDegrees.org, maybe an uptick in the ratings for the Bacon-starring The Following, and definitely the mislabeling, over at Getty Images, of the photos of Brian Turtle and Lance Ulanoff: Hey, people, you’ve got the names switched. Just a little charitable heads-up, there.