Diana Whitten takes viewers inside the fight for reproductive rights

Dr. Rebecca Gomperts is committed to the wisdom of women. 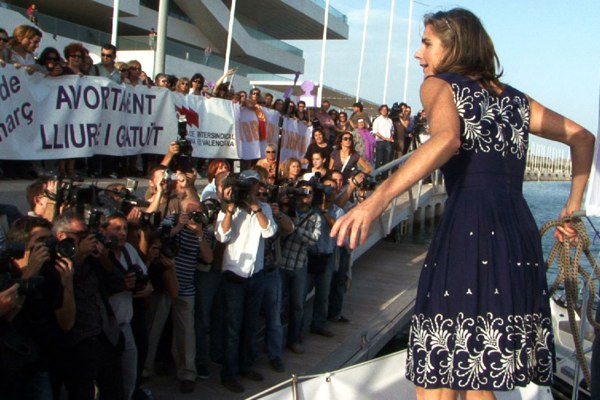 So much so that in 1999 she founded Women on Waves, an organization dedicated to empowering women and to ending unsafe abortion in countries that deny women a most basic right – the ability to control their own destiny. First-time feature director Diana Whitten's compelling and emotionally charged documentary takes viewers inside the international fight for reproductive rights.

Serving as a ship's doctor on Greenpeace's Rainbow Warrior II, Gomperts met women in South America traumatized by unwanted pregnancies in countries that deny them legal access to abortion – a circumstance that does not reduce need for the procedure, but instead makes it far less safe, even, all too often, deadly. Determined to do something about that, and on a colleague's suggestion, Gomperts transformed a shipping container into a health clinic – stocked with supplies to perform pharmaceutical abortion – and strapped it aboard an ocean-going vessel in an effort to bring reproductive rights to women at sea, in international waters, where the laws of her country, the Netherlands (where abortion is legal) would control what happened on the ship. As Gomperts describes it in Whitten's film, it is an effort to "create a space where the only permission [women] need is our own."

Not surprisingly, Gomperts' efforts, beginning in Ireland in 2001, have been met with fierce opposition. She's faced angry protesters – in the film, often dominated by vocal and aggressive men – at ports from Ireland to Poland, Portugal to Morocco.

Whitten's film expertly frames the charismatic and indefatigable Gomperts as she endures the opposition and plows fearlessly forward on her mission, ultimately expanding it beyond the sea and onto the Internet, where her Women on Web delivers vital information on reproductive health and support to women around the globe.

While it would be easier, and psychically less challenging, to conclude that Whitten's film concerns only women in foreign countries subjugated by overtly repressive and dogmatic governmental regimes, that is certainly not the case. Indeed, in recent years reproductive rights here in the U.S. – where reproductive choice is supposedly guaranteed by the Constitution – have come under increasing, and increasingly hostile, attack – with Texas leading the way in restricting access to safe and legal abortion care.

The passage last year of House Bill 2 by Texas lawmakers – under the guise of ensuring women's health and safety – threatens the right of women to control their reproductive health and destiny. Since the first two provisions of the four-part, omnibus abortion-regulation law took effect last fall, more than a third of the state's abortion providers have shuttered their operations – and just this week, as projected and feared, the second of only two clinics in the Rio Grande Valley closed, leaving women in South Texas in need of abortion care without any safe and regulated local options, imposing daunting geographic and financial obstacles that will certainly be insurmountable for the most vulnerable Texas women. In fact, HB 2 curtails a woman's ability to access the pharmaceutical abortion that Gomperts has worked to expand access to – abortion by medication that is administered during the earliest stages of pregnancy.

Given that Texas lawmakers have also seen fit in recent years to drastically reduce the ability of low-income and uninsured women to access basic reproductive health care services – importantly, including access to contraceptives – it becomes increasingly hard to believe that ensuring women's health and safety is any motivator for them at all.

Indeed, in Whitten's film, one of Gomperts' colleagues points out that among the hundreds of thousands of queries they receive from women seeking access to services, an increasing number come from the U.S. "If good health care is not accessible within the law," Gomperts asks in the film, "then what does the law mean?"