Moral ambiguity is center stage in this directorial debut

Riddle me this: Who is the biggest sinner? 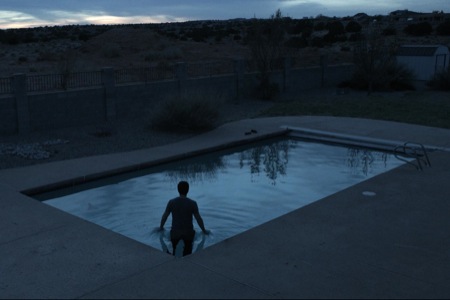 In Things People Do it's the one who believes the most strongly in sin. Bill (Wes Bentley), an overly conscientious insurance adjuster, loses his job but neglects to inform his factory beautiful wife (Vinessa Shaw) or his two iPad-obsessed boys. Everyone is too busy consuming the American dream amid the arid beauty/ugliness of the New Mexico suburbs while the bills, both financial and moral, pile up. Bill turns to crime to solve his financial woes while simultaneously befriending a troubled police detective (Jason Issacs of the Harry Potter films) whose world-weary moral code is grounded in Thomas Hobbes’ Leviathan – we only do good when we fear the societal consequences of doing evil: prison, shame.

First-time director Saar Klein traces the film’s birth to a conversation with filmmaker Terrence Malick (Klein was Oscar-nominated as editor of The Thin Red Line). Malick pal Joe Conway and Klein co-wrote the smart script in which a wolf is always lurking at the nearby desert door. Wes Bentley (fittingly an American Beauty alum) is tensely buttoned-down and leads a convincing cast. The camera work is luscious. But moral ambiguity – interestingly formal religion goes unmentioned – is center stage, and the film ultimately succeeds by sending audiences home to ponder their own levels of sin.