There's something deadly in East Texas: Eduardo Sanchez's Exists is one of the films getting a world premiere in the SXSW Midnighters

OK, horror fans. It's time to abandon your beauty sleep. SXSW has just announced its Midnighters, and it's all fear and nothing but. Festival producer and senior programmer Jarod Neece said, "There's no raunchy comedies this year. It's all just straight ahead horror."

Unlike bigger dedicated genre festivals, Neece said, "there's only ten spots so it's a little more curated than a Fantastic Fest or Fantasia that can show 90 genre films." Still, that doesn't mean the selection process is any less rigorous. Neece has spent much of the last year running from festival to festival, starting at Fantasia, through TIFF, and even a quick trip through Estonia for the Black Nights Festival. He said, "(Alamo Drafthouse CEO) Tim League and I were there, and we were both running to get back before Thanksgiving." But this isn't some greatest hits collection: They have eight world premieres, a US premiere and one Sundance favorite. Neece said, "Usually we have a couple of films from Sundance, but this year we had so many good films."

That list starts with the latest from Eduardo Sanchez. He may still be best known for the seminal The Blair Witch Project, and to mark that film's 15th anniversary he's returning to a very familiar camping ground with Exists. Neece said, "This is a found footage in the woods, and normally it's the worst thing you can do, but it's just so well done."

As is always the way with SXSW, which dedicates itself to nurturing talent over the long haul, there are several names that will be familiar to regulars. Sanchez was here with the eerie psyscho-sexual-possession shocker Lovely Molly in 2011. Daniel Stamm, who screened his faux-documentary A Necessary Death at SXSW 2008, returns with 13 Sins (in fact, his breakout hit The Last Exorcism almost played SX, but got snapped up by Lionsgate just before the festival.) Similarly, Adrián García Bogliano, who wowed the crowd in 2011 with the gonzo Cold Sweat in 2011 is back with Late Phases.

Meanwhile two Fantastic Fest veterans brings. Julien Maury and Alexandre Bustillo (creators of the bizarrely AWOL Livid) return to Austin with Among the Living. Meanwhile shorts genius Jerome Sable attends the world premiere of his first feature, Stage Fright. Neece said, "He made this really great short movie called The Legend of Beaver Dam and this is the feature adaptation of that, with Meatloaf and Minnie Driver and singing." Dan Stevens gets rough in The Guest, one of this year's SXSW Midnighters

And would it really be an Austin film festival without Adam Wingard and Simon Barrett? Last year, SX broke its golden rule about not showing another locally-premiered film when they played You're Next. Now they've swiped one of the big Sundance debuts, Barrett and Wingard's The Guest, starring Dan Stevens as an increasingly unwelcome visitor. "I didn't realize that was the guy from Downton Abbey," said Neece, "but you just take off the cummerbund and the bow tie."

Of course, there are always some true newcomers, including Oculus, the new supernatural shrieker starring Karen Gillan (Dr Who, Guardians of the Galaxy) "I loved it from the first time I saw it," said Neece. "It was just awesome that we were able to present the US premiere for that." 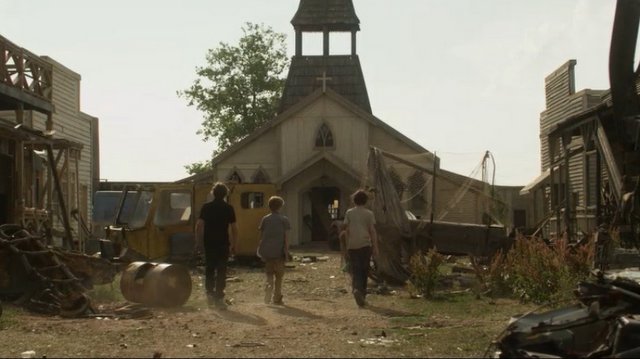 Among The Living
D: Julien Maury, Alexandre Bustillo
Screenwriter: Julien Maury, Alexandre Bustillo
Cast: Anne Marivin, Béatrice Dalle, Francis Renaud, Fabien Jegoudez, Nicolas Giraud
World Premiere
After horror favorites Inside and Livid, Maury and Bustillo pair up again for a horror-thriller at the cross roads between Stand by Me and Friday the 13th.

The Guest
D: Adam Wingard
Scriptwriter: Simon Barrett
Cast: Dan Stevens, Maika Monroe, Leland Orser, Lance Reddick, Sheila Kelley
Regional Premiere
A soldier on leave befriends the family of a fallen comrade, only to become a threat to all around him when it’s revealed he’s hiding dangerous secrets from his past. "Chocolate Heart"
D: Harrison Atkins
Owen never learned about sex or relationships from his parents, since they turned into cats. But today, with the help of a human girl, Owen is going to learn a lot.

"Kekasih" (Malaysia / USA)
D: Diffan Sina Norman
In pursuit of his late wife, a botanical professor encounters a divine presence that will transform him forever.

"Kids and Explosions - Swear Words" (France)
D: Thomas Vernay, Yann Wallaert
Inspired by GIF, this video clip is about the clichés of American antagonisms: Christian thought, homeland love and excesses of the USA.

"The Muck"
D: Tony Wash
Laverne arrives home and decides to relax in the bathtub. She strips down, settles into the tub, and closes her eyes. Serenity at last... or so she thought! "The Muck will leave you never wanting to take a bath again!"

"Pumpkin & Bubby Get in a Fight"
D: Will Carsola
Two friends find themselves defending themselves against the forces of nature.

"Violent Florence" (Australia)
D: Jaime Snyder
Florence rescues a stray cat from a gang of teenagers. After taking the feline to an isolated building, her true intentions emerge.