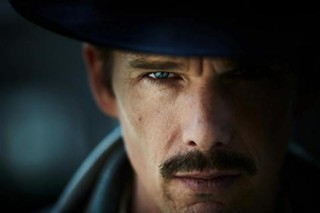 Together again for the first time: Ethan Hawke in Predestination, one of a multitude of time travel films at SXSW 2014

With only a month and a half to go before the first screening, it's busy times at the SXSW Film Festival, and that means the long hours have started already. "I tried to go home and get in bed by 9," said festival director Janet Pierson, "but that didn't happen."

Her first task: Putting together a slate of over 150 films. With the full lineup (barring Midnighters and shorts) unleashed today, there's already the guessing game of working out what the insurgent trend in filmmaking is this year. If it's anything, it's the year of the time-travel movie, with Liv Tyler in Space Station 76, Ethan Hawke in Australian spy tale Predestination, and time-travel romcoms The Infinite Man and Premature. Normally, the festival doesn't double down on too many films with a similar motif, but this year the strength of each movie spoke to the booking team. Pierson said, "It became interesting to see how all these different people were doing something, having that in common."

Another theme that's coming through this year less explicitly is filmmakers coming to grips with current ubiquitous technology as both a narrative tool and an inevitable part of modern life. There'll be real local buzz about Nacho Vigalando's Open Windows (not least because parts were set at Austin's own Fantastic Fest and the film stars Austin transplant Elijah Wood). Pierson said, "You see the way Twitter is handled in several of the movies in a very substantial way, as well as texting. … How people relate now with each other and technology, you see that more and more."

SXSW has also developed a strong reputation for documentaries, and Pierson senses a particular perspective. She said, "If we have an overall bias, it's dealing with big subjects through the intimate or the personal." That includes a Texas-set tale of environmentalism, as Above All Else charts how one East Texas landowner rallied his community against the Keystone XL pipeline. "It takes you really close into, without being heavy-handed or didactic, what it means to protect your land." It's the same mood for The Great Invisible, charting the personal impact of the Deepwater Horizon disaster. Calling director Margaret Brown "a very soulful, artistic filmmaker," Pierson described it as "a very personal look at that spill."

A festival is not just about the films: It's where you see them, too. Of course, there'll be the traditional Downtown screenings at the high-profile theatres like the Ritz, Paramount, and Stateside, but Pierson is already encouraging attendees – especially Austinites looking for individual screenings – to start planning for other venues where the films are just as good, but the lines are often shorter. The monster Vimeo room will be back at the Austin Convention Center, and yet again the festival will be utilizing the spacious Topfer Theater at the Zach Scott on Riverside. The super-comfortable Violet Crown is back too, but this year all four SX screens there will be showing the same film, meaning screenings won't sell out in seconds. Then there's the satellite venues at Alamo Slaughter Lane and the Alamo Village, plus the big addition of Austin Film Society's recently adopted home, the Marchesa Hall and Theatre. Pierson said, "It's great. It's 300 seats, there's parking. We have some special events that are only going to be there, but otherwise it's a rotation with some of the Downtown screens."

Speaking of special events, there's also the long-awaited return of two filmmakers with Austin connections – one on the verge of commercial success, and another who has become synonymous with quirky independent cinema. Gareth Edwards, whose Monsters caught SX Fantastic off guard in 2010, will be showing the original Godzilla. He's fine-tuning his highly anticipated remake of the seminal kaiju, and will be returning to talk about the movie that started it all. Pierson said, "We've wanted him back for years, but he's been busy; he's been working on stuff. So the idea that he's coming to show this film, we love it."

And then there's the long-awaited return of the prodigal son, 1990 UT graduate Wes Anderson, for a screening of The Grand Budapest Hotel. Pierson said, "There's always been this mythology about Wes, that he went to school here but he never comes to Austin. … So when the opportunity for him to come with his film came this year, we jumped at it."

Of course, it's been a monster year for Texas filmmakers, who make a strong showing in the Festival Favorites strand. That includes the U.S. debut of David Gordon Green's new thriller Joe, starring Nicolas Cage. Pierson said, "It's visceral and gritty really hits its mark."

Three pictures that debuted at Sundance make their Austin debuts, and for Pierson they all represent the best work to date by some familiar names. Kat Candler's Hellion may be her breakout movie, but it's not necessarily what Pierson expected. "I always figured that she's got a Twilight in her, some super-blockbuster young adult material, because she's really great with young adult material." Instead, Candler has created Hellion: "No sentimentality, incredible performances, real violence. I was sobbing at the end of it with pride."

Similarly, Pierson called the Zellner Bros.' Kumiko, the Treasure Hunter "just epic. It needs to be seen at the Paramount." As for Richard Linklater's 12-year passion project Boyhood, Pierson said: "I didn't think things could get better than Before Midnight. For me, that was the ultimate masterpiece, Boyhood is different, but it's a singular achievement that is just remarkable." Less known is another Lone Star Sundance fave, Michael Tully's Ping Pong Summer, but Pierson was determined to show it here. "We can't show every Austin film that's at Sundance," she said, "but we certainly try to support them as much as we can."

Texas talent also make a big show on the small screen with the introduction of the Episodic programming strand. There's been a TV component at SX since before Pierson arrived in 2009, with shows like Girls and Bates Motel airing their pilots here. Pierson said, "People were coming to us because it would be exciting to launch with us, and we thought, 'Let's see. If we find the work to support it, we'll create a section dedicated to it.' Luckily we found these six series premieres that absolutely spoke to our sensibilities." That list includes the world premiere Robert Rodriguez's TV remake of From Dusk Till Dawn for the El Rey Network and the latest from Mike Judge, HBO tech bubble comedy Silicon Valley. "I'm a crazy Mike Judge fan," confessed Pierson, "and now that we've finally seen the show, it's hilarious. Perfect for SXSW."