'At Any Price' and 'The East' Ask for Answers 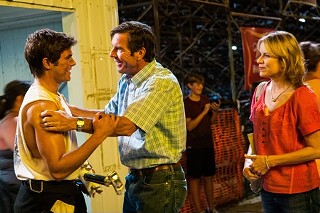 The two final South by Southwest films to show at the Paramount – At Any Price from director Ramin Bahrani and director Zal Batmanglij's The East – had more in common than their booking times.

A part of the Festival Favorites category, At Any Price follows the story of Henry Whipple (Dennis Quaid) and his attempt to pass on his family’s farming legacy to his son, Dean (Zac Efron), a rebellious and temperamental racecar driver with dreams of going pro. Like Bahrani’s three previous films – Man Push Cart, Chop Shop, and Goodbye Solo – At Any Price follows modern Americans as they are corrupted or forgotten amid the capitalist system.

The film lacks a traditional narrative structure and resolution, but it progressively unravels its tale into darker and darker events as the characters’ struggles to achieve their dreams include committing morally corrupt acts: adultery, theft, murder, blackmail, etc. But in the end, no one is made to suffer the consequences of their actions. Quite the opposite: Characters seem almost rewarded for their corrupt behavior.

Bahrani, Quaid, and Efron were in attendance Saturday night, and they participating in an audience Q&A after the screening. Bahrani explained that the film uses the father and son story to explore the “expand or die, get big or get out” culture that has begun to pervade America. One audience member questioned the ending's lack of resolution, to which Bahrani responded that he “wanted to end it more on an emotional resolution and a philosophical one.” Quaid supported Bahrani’s explanation, describing the ending as a “question mark” not a “period.”

Efron added that he saw his character’s desire to divert from the path his forefathers had laid for him as a symbol of our generation. This sentiment of generational representation carried forward into Batmanglij’s introduction to The East. Batmanglij first took a moment to acknowledge SXSW as the only festival that truly represents our modern experience. Referencing the three arms of SXSW – Film, Music, and Interactive – he postulated that SXSW is the only festival at which you could watch a film while listening to music and sending an email, as we often do in our daily lives.

A part of the Headliners category and the closing night film, The East, which premiered at Sundance earlier this year, tells the story of Sarah Moss (Brit Marling), an operative for a private intelligence firm who infiltrates an anarchist collective called The East, responsible for several covert attacks on major corporations. Like Batmanglij’s debut film, Sound of My Voice, The East plays on the tension and mystery produced by a well-structured plot that features an outsider’s infiltration of a cult-like organization, but The East uses this set up to explore the moral gray areas present within our current American capitalist system; the film features several eye-for-an-eye attacks on oil, pharmaceutical, and coal company executives.

Following the screening, the audience was treated to a Q&A with Batmanglij, Marling, and her co-stars, Alexander Skarsgard and Ellen Page. Skarsgard said that this was the second time he had seen the film, and that he still wasn’t sure who the good guys and who the bad guys were. Batmanglij acknowledged that this was an intentional choice. He and Marling (who co-wrote the screenplay) talked about how real life events kept paralleling the story they wanted to tell. For instance, immediately after they finished writing the opening scenes of the film, which feature the consequences of an oil spill, the BP oil spill happened. Then, a week after they began production, the Occupy Wall Street movement began, with ideas and actions seemingly akin to those of the film’s fictional anarchist collective. Batmanglij and Marling said they felt like they were in a race to finish the film, as it seemed they were on to something current and generational.

The audience responded well to the filmmakers' discussions of the themes behind both of their films, so it seems the directors achieved their aims of tapping into the current generation’s zeitgeist. While the films utilized different tactics and techniques, they both raise timely questions and don’t necessarily offer the answers. And if the audience’s responses were any indication, clearly we are all searching.