The Cirque(us) Comes to Town

And they aren't the only clowns roaming Downtown

The Tuesday between SXSW Film + Interactive and SXSW Music is always a strange day. Packs of people wheel their luggage around; they’re either coming or going, and the looks on their faces are fresh or freshly worn in an exasperated excitement. One group of SXSWers is going home, one is arriving, and the streets are the index of this shift.

I hear it’s good for me.

My destination was the Moody Theater at Austin City Limits for one of the few events open to Film and Interactive participants, #EVOKE13, a mash-up of Cirque du Soleil, Chris Hardwick’s Nerdist Industries, and the Divine Fits. To get there I had to walk through the middle of the mess – Sixth Street. 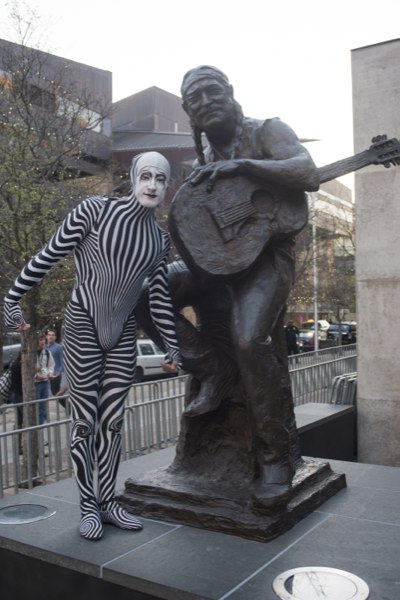 Granted, I could have avoided Sixth, and I usually I do, but I was curious. I saw three new venues that only a month ago had been empty lots (including that awkward space between buildings that remained derelict for years, now dubbed The Nook). Music now bleeds out onto the street more than usual, as sound systems and their attendant stages are erected on parking lots. Here some energy drink company sponsors a dudely-band (“Hey, can I get more monitor?”); there some cigarette company tests out their sound equipment before they let RSVPs in (“check check cheeeeeeck”). A group of three people walks intently from streetlight to streetlight tearing down posters featuring a skullish image of the pope. One of them has a cigarette dangling from her mouth. The dandies and the douches are both out in force. Everyone in their mini-tribes. Everyone giving directions, opinions, and advice. I hear: “Dude, they’re not traffic signals, they’re traffic suggestions!” And in less than 24 hours, Downtown will be trashed (filled with the inebriated and their material refuse), and city cleaning crews will work through the night, unseen and unrecognized by most, to make sure only few visible traces remain of the previous night’s revelries. I saw more rollerbladers than I’ve seen since 1995, and a cop who looked as if she materialized right out of a GB Jones drawing. 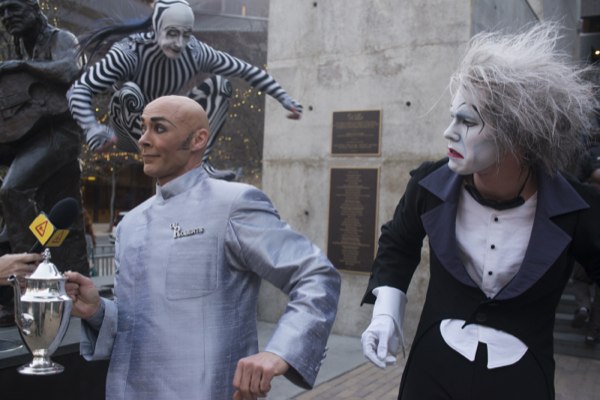 Finally, making it to the Moody Theater, I gained entrance and a red clown nose. It was a little foam imperative to lighten the fuck up, Campbell. Which I did. From the time the doors opened, Cirque clowns ambulated amongst the audience. My favorite: a bald tea-pot-holding maestro pouring steam on the crania of creatives, coo-coo-ing the whole time through. #EVOKE13’s bill was an odd one. I couldn’t help but notice this was an event geared primarily towards the techies – first on the bill was an Adobe presentation, followed by Google’s presentation of a new collaboration with Cirque (Movi.Kanti.Ravo). I’ll come clean, I left for these first two “events.” After a festival filled with proprietary promotional talk (inner monologue: do people actually talk to each other anymore?), just the words “Google” and “Adobe” caused me to break out in hives.

Ok, hyperbolic, but I was there for the circus, dammit! But before Cirque, Chris Hardwick’s Nerdist gathered a group of people to sit around a rectangle table to talk nerdy, funnily. For those who don’t follow Hardwick’s many pursuits (podcasts, Web Soup), he’s come a long way since Singled Out. He’s embraced his dork, and helps others to do the same – it’s humanitarian work, in my mind. Following Hardwick, et. al. were Divine Fits, who were, well, divine. But as much as I love Britt Daniel’s new musical outfit (and I do), I was still more excited to see Cirque du Soleil do their freaky French-Canadian thing. 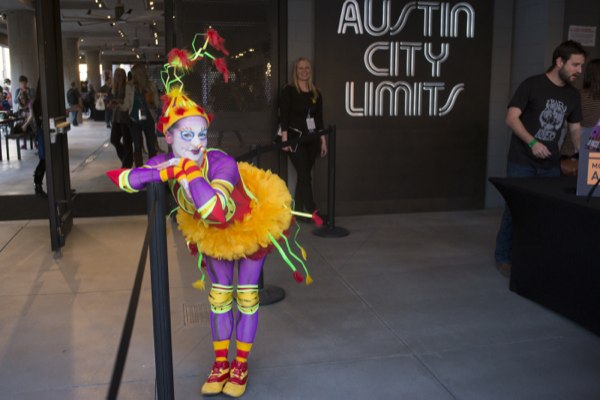 Cirque du Soleil has become such an entertainment brand, that their airbrushed adult-contemporary aesthetics can sometimes mask all the incredibly physical talent. Not here. Saltimbanques tumbled and stacked themselves vertically, two, then three, then four-high. Because the performance is a unique one (there is no #EVOKE13 show) it was presented without the grand staging or loose and dreamy storyline that have become Cirque hallmarks. It was a little more than just-the-tricks-ma’am, but only a little, and that was just the right balance for Austin.

Of course, stepping out of the Moody Theater, it was hard to ignore that another circus is in town: a few someones had already had too much to drink and were paying the price on Sixth. And though it was cool out, you could feel the breathy beer-fueled body heat literally changing the temperature of quadrants of Austin’s party/music headquarters. The contrast was stark: We have moved past the gloaming, that sweet spot between daytime and nighttime when the light is at once muted and incredibly bright, and into the night.