'The Boy Who Harnessed the Wind' Captures SXSW

‘William and the Windmill’ Q&A recap 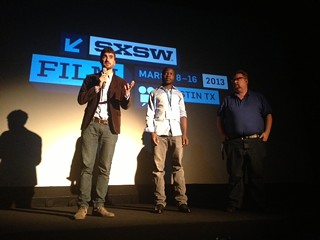 Director Ben Nabors and principal cast members William Kamkwamba and Tom Rielly answered a few audience questions Monday – a day after the world premiere of William and the Windmill, which took the Grand Jury doc prize.

Malawi-born William Kamkwamba has become something of a celebrity, thanks in part to his book deal (The Boy Who Harnessed the Wind) and TED talk and movie. Yet the young man’s responses on Monday reflect the humble and gentle nature portrayed in the film. Nabors’ attention to psychological details, especially in such a volatile environment, was mentioned. Of that he said: “[The subtlety] was a very important detail to me. Extremely important and very difficult to maintain through the course of this story, largely because it’s the person that I see, and the person that I know. It was absolutely necessary to me to represent William beyond the story of William’s book or beyond William’s talk, to give him a portrait that would enable him to do whatever he wanted to do.”

Kamkwamba, now a junior at Dartmouth, said he intends to return to Malawi post-graduation to use his newfound knowledge for improvements in his village. William said that most of the farmers in his community chose that occupation because of their circumstances. He wants to give them a chance to choose their own path, just as he was given with that very first TED talk.

An audience member asked friend and mentor to Kamkwamba, Tom Rielly, to discuss the related historical relevance of the effects of wealthy white people in Africa – such as Tom himself – to altruism in Africa. Rielly said that he felt his role, and perhaps the key to success, is to “find the sparkplugs, the [individuals] who will change the continent themselves.” He said Kamkwamba is such a person, and that this story is about “the power of education and community, and maybe luck, but also personal responsibility.”

The rapid ascent from famine to fame has certainly yielded great rewards for Kamkwamba's community. He said that his family’s lives have changed significantly, for the better. When an audience member asked about the money from books, movies, and speaking engagements, Rielly explained that “it’s real simple.” In short, the monies from deals mentioned go directly to Kamkwamba, who “is supporting five sisters in private school right now, just because he thinks it’s the right thing to do.”

William and the Windmill was crowdfunded by Moving Windmills, a 501(c)3 nonprofit, and these proceeds go directly to village projects. Already installed is the solar water pump that now provides one of the only resources for clean drinking water in the area. Even more: Kamkwamba's efforts have provided three new primary school blocks with two classrooms, all equipped with light and power.

To resounding applause, Nabors also mentioned that Kamkwamba got his first pair of cowboy boots in Austin this weekend. Though he would likely never admit it, William Kamkwamba is already a hero, and he is just getting started.