SXSW Review: 'The Lords of Salem'

A series of micro-nightmares bolstered by Rob Zombie's style 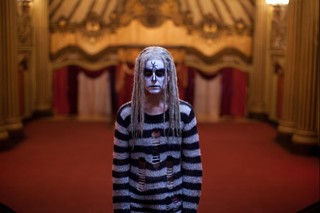 Which isn't to say Zombie's fifth feature film is a triumph along the lines of 2005's soul-searing The Devil's Rejects. That film was an incendiary revelation, a black-as-pitch perfect homage to an unclassifiable 1970s drive-in/grindhouse subgenre that for all intents and purpose no longer exists in the U.S.

Lords, with its dreamy narrative structure and deep references that span the spookshow gamut from Polanski's The Tenant and Rosemary's Baby to any number of hallucinatory Mario Bava films, and from there to lesser-known fare such as Michael Winner's terminally underrated 1977 shocker The Sentinel, is not so much a narrative film as it is a series of micro-nightmares, each and all bolstered by Zombie's trippy and unnerving sense of style: He's off the leash here, and while the film as a whole never coheres (or makes all that much sense), it's a gas to see this true American auteur run creepy-ass riot over what passes for "horror movies" in contemporary Hollywood. (Surprisingly, the film was produced Oren Peli, the man behind such flatline "shockers" as Insidious and the Paranormal Activity franchise.)

The Lords of Salem's plot – what there is of it – takes a backseat to the film's skewed sense of the everyday slipping into the freakishly bizarre. Suffice to say, this being Salem, long gone witches will exact their revenge, Satan gets unofficial top billing, and Sid Haig makes a blink-and-you'll-miss-it cameo. Also, there's a squirmy little anti-god, The Rocky Horror Picture Show's Magenta, Patricia Quinn, and a whole lot of goats. Nice.

Moon Zombie has come a long way, acting-wise, since House of 1000 Corpses, too. Her psychic meltdown is believable in a way that recalls Catherine Deneuve's fractured heroine in yet another Polanski reference, Repulsion, and while the script calls for her to undergo all manner of madness, her performance here is by far the most nuanced she's ever given.

I could go on and on about Zombie's style-over-substance direction, but why bother? The Lords of Salem is so clearly a project that Zombie has had stewing in his blood-and-black-lace heart for, I assume, ever that the fact that it's not a masterpiece seems almost moot. It's a head trip, to be sure, but it's Rob Zombie's electric, haunted head, so my advice is just sit back and goggle. It isn't Jodorowsky (although it surely references that influential Chilean artist), and it never quite reaches the vertiginous heights of Polanski's finest paranoiac fantasies, but Zombie's phantasmagoric freakout ends up being a win/win simply because it deliberately fucks with the current Hollywood horror status quo. It's probably best experienced under the influence of some of Bastrop's beloved magic mushrooms, in one of Lamberto Bava's eerily empty cinematic movie palaces. High praise for a Zombified vanity project indeed.