E.L. Katz set the tone for the world premiere of his directorial debut, Cheap Thrills, with this suggestion: “No matter how fucked up things get, don’t be afraid to laugh.” Last night’s midnight audience at the Ritz took his advice.

In Cheap Thrills, Craig (Pat Healy of The Innkeepers), a blue-collar worker struggling to care for his family, loses his job. Upset and defeated, he hits a local bar to have a drink before heading home to break the news to his wife, Audrey (Amanda Fuller of Red, White, and Blue). There he runs into an old high school buddy, Vince (Ethan Embry), and as the two are catching up, a wealthy couple, Colin (David Koechner) and Violet (Sara Paxton), approach them. The couple invites the working-class friends to join them, and as the night develops they pay Craig and Vince to complete a series of increasingly disturbing dares. Fueled by their dire financial situations, Craig and Vince begin to turn on each other in sad, funny, and gory one-upmanship. 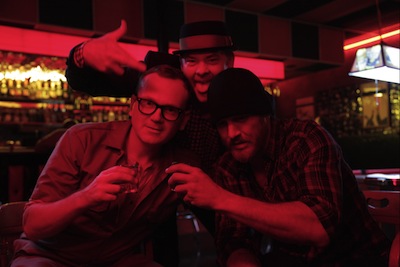 While not necessarily a horror film, in the Q&A that followed Katz did say the film was “obviously [made] by someone who loves them.” With its over-the-top violence (and its use of rotisserie chicken covered with cotton to stimulate dog meat for a food-based dare scene), the audience no doubt agreed. “When I went to film school I told the counselor I would like to work in the horror industry, and he was like, ‘No you can’t really specialize that much. That’s not how it works.’” Katz, who says he has a Fulci tattoo, called that “bullshit.”

While predominantly an homage to the horror spirit, the film does seem to carry some subtle contemplation on social hierarchy. An audience member asked how much Katz intended a criticism of capitalism. “I don’t have an agenda,” said Katz. “I don’t come with anything overtly political.”

UPDATED: Drafthouse Films, in partnership with Snoot Entertainment, has picked up Cheap Thrills for U.S. distribution. Wanna know how the deal went down? Tim League helpfully pulled back the curtain on the process via Facebook. 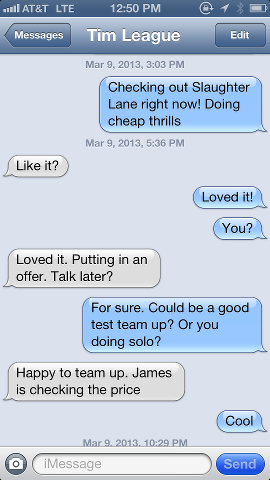