Thoughts from the line outside the Paramount 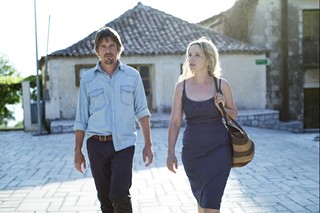 I'm standing in line behind the Paramount Theatre when my mind wanders back to my introduction to Richard Linklater's Before film series: Before Sunset at the Magnolia theatre in Fort Worth in 2004 with my first girlfriend, who was the first girl I ever loved who also happened to love me back.

I remember the drive home after the movie: She's proposing we try what Jesse and Celine tried and not communicate with each other until the Christmas break after I leave for Austin for my freshman year of college. We compromise and agree that we should be allowed to write letters to each other, and then we both cry, and I force myself to stop because I'm driving and don't want to put my car in a telephone pole and prematurely end our whole affair right then and there.

A SXSW volunteer hands me a little square piece of paper that says 160 on it, which means not only will I be getting into the screening of Before Midnight with no problem, but I'll be getting a good seat. I feel a cool breeze on my face, a stark contrast to the sweat-will-never-dry humidity of all day prior.

In front of me in line, I listen to a younger man and woman, seemingly around my age, speak to two middle-aged men about a myriad of subjects that I find interesting, but for some reason I refrain joining the conversation, even as it veers into Parks and Recreation territory. "They're a cute couple," I think to myself, and he steps out to the street to take a phone call and she reveals to the middle-aged men that they're co-workers and that she thinks he's great, and then she, too, steps toward the street and lights a cigarette.

The way she smokes, the cigarette will last about six minutes, and I spend about four and a half debating whether I should ask to bum one. I decide to ignore the fact that I quit and do so.

She ignites with energy when I ask, handing off a cigarette with the breakneck speed of a person that truly loves meeting and speaking to other people. She says she's never heard of Arlington, where I grew up, and that she'd lived in Paris until moving to the States a year ago. This was her first time in Austin.

"Pair-ee…" she reiterates, looking dreamily just to my left at something nobody else could see.

"It's a really special place… Landmarks that Hemingway wrote about, they're still there." I can't ignore how beautiful her big eyes are under the streetlamp, and she's nice enough to ignore that I know nothing about her hometown outside a handful of films I've seen. I say that Before Sunset must have held a special importance to her, and she says that yes, it had. She smiles nostalgically, and I don't mention the importance it held for me.

I figure that it's South by Southwest, and so far I've spoken to that bearded guy in the flannel and the red baseball cap at three different locations, all very far apart, so maybe I'll run into the girl from Pair-ee again, too. Or maybe the encounter, and my state of mind in line for Before Midnight, is just a testament to the fact that there's something very, very special indeed about Linklater's series.

Stay tuned to the Chronicle's SXSW coverage for more from last night's Before Midnight screening at the Paramount.