Get Schooled at Buck U With 'Mr. Angel' 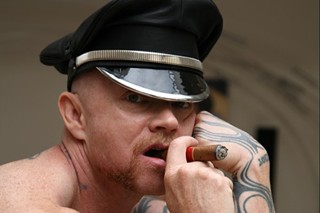 Buck Angel: I’m in Mexico, so I have a really bad connection. Third world country.

AC: What are the questions that you find people often ask of you?

BA: A lot of their questions are transgender-related. I put forward to these guys and girls how lucky they are to be going through transitions at this time in the world. I think a lot of the questions I get also center around why I got into porn as a transsexual, and how I got comfortable with my body – because as you can clearly tell [in the movie], I’m very comfortable with my body! Yet many trans* people are not really comfortable in their body, for many reasons. I think people, and not just trans* people, want to become comfortable with their bodies. So people are generally curious to know how I got to the point where I’m running around saying “I love my vagina!” For me this is so normal, but I have to back up and acknowledge that, yes, it is pretty incredible I got myself there.

AC: How did you meet Dan Hunt [director of Mr. Angel]?

AC: I would say it’s a character documentary – about you, holistically – your relationships, work, advocacy, and your family. I think the storyline with your biological family is an emotional center of the film. What was the process of opening the documentary out to your family?

AC: Where were you, physically, for that interview? Because that is a really powerful moment in the documentary…

BA: I removed myself from the room prior to the interview, because I knew it wasn’t cool nor were they comfortable with me in the room.

AC: Did you think they wouldn’t be as candid?

BA: Right. I was in the next room, and I wasn’t sure what I was hearing. But I heard my dad break down. I don’t know if you can tell, but my dad is an ultra-macho guy.

AC: It seemed very difficult for him to show his emotions on camera.

BA: It was such an amazing experience. And that “therapy session” was a breakthrough. My dad is a different person. We have a different relationship. He calls me all the time, when he never did that before. That was incredible, and I feel honored to share that with the world. Because that’s going to help someone.

AC: Yes, it’s brave for people, like your father, to confront their own entrenched limits about what is acceptable gender expression on camera. I had a sense of how conflicted, in fact, he was. BA: For my dad, I can’t even tell you... More than brave. I became protective, I came into the room and said to Dan, “We have to stop filming.” I told my Dad that what he did and said will save so many people.

BA: Yeah, I was already comfortable in front of the camera, and really, I began a friendship with Dan. I felt he was my brother, hanging out with me with a camera in his hand. My wife [piercing expert Elayne Angel] and I never felt uncomfortable with him, he never crossed any boundaries, and so we were open about anything. Ultimately, that’s why it was so easy for us to make this film. We just have a relationship with each other.

AC: Let’s look forward to you being in Austin – obviously you’re here to represent the film you’re in, so we’ll know where to find you for screenings! But what else are you excited to see and do here?

AC: Yes, there are some Internet dating panels as well.

BA: Oh yes! Internet dating, I’ll be going to those because I have my own internet dating site. I started that specifically because I got so many emails from members of the transgender community. Our community has grown so tremendously, as I’m sure you know. Especially within the transmale/transmasculine community, the question has become “How do I find someone to date?” Many of them become gay men. So then the question becomes, “How am I going to find a gay man who’s going to be interested in a guy like me?” Dudes, guys dig guys like us! I’m also very big on disclosure, and I know that for many reasons it’s often difficult for people to disclose – so that’s when I thought I could start a site where guys could go on and know what they’re getting. And I named it after myself – one, because I’m totally into marketing and branding…

AC: I mean, I couldn’t tell from your shirt [points to Angel’s shirt, reading “BUCK U”].

AC: One of the things I noticed in the documentary is that you are always on the go-go-go, working it out! It reminds me of that moment in the Joan Rivers documentary [Joan Rivers: A Piece of Work, (2010)] where she points to a blank calendar page and says “That, is fear.” What do you do when you’re ready to unplug and you need some self-care?

BA: Well, I’m blessed. I live in an amazing city, Mérida [in Yucatán, Mexico], so I’ll just stop and take a breather. This past January, for example, I didn’t take any gigs, I didn’t travel. For every three to four months of working like a maniac, I’ll take three to four weeks and go to some adult-only luxury resort in Cancún, no children, and just lay by the water and do … nothing. But my house is like that too, honestly. The most incredible thing I ever did was to move down here with my wife.

AC: Are there other films at SXSW you’re psyched to see?

BA: I Am Divine and Continental… Malcolm [Ingram, director of Continental] and I are like buddies. Those two, for sure, I’m 100% going to.

AC: Then you leave for Dallas. Are you coming back for GayBiGayGay? It’s kind of amaaaaazing…

BA: Yeah! That’s a possibility. Do you know Heyd Fontenot? He’s doing a drawing of me. He is so very rad.

AC: You’re lucky, no one ever looks bad in his drawings and paintings. Everyone looks sexy and adorable.

BA: Maybe I could get him to bring me down…

Transmission to Heyd: Bring him back down for GayBiGayGay.