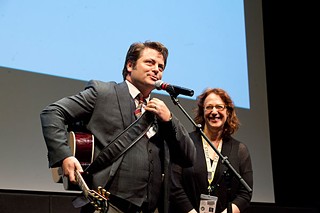 Janet Pierson has the coolest job – and the toughest job. As the SXSW Film Festival director, she leads the team that selected the 110 features announced today. Now, like everyone else, she's really delving into the listings. She said, "We're still in the middle of it, and it's like, well, what did we do, what does it look like?"

Pierson called us this morning (just before what will probably be a crazy-exciting Reddit "ask me anything" session with the SXSW Film team at 3pm on Jan 31) to chat about how they built this year's lineup.

It's been a monster of a process, whittling 2,096 submitted features into a decent size. According to Pierson, that's been tougher this year than ever. She said, "The number of brilliant, great, transcendent films is probably the same as it's always been, but there are more and more good films." Now she's absorbing what it really means. "There's a couple-of-week period where I just picture Inception over and over again, because time's folding in on itself. You're still screening, you're trying to keep up with people asking if they're in, you're trying to get on top of the people you're saying are not in. There's too much going on, and you just have to hit a wall and say, 'OK, stop, stop, this is a date, you've got to go forward. But then when I start talking about the films, it really comes alive."

Now the organizational rubber meets the road, as the team gets films into screens and backsides into seats. Everyone has been scratching their heads about whether the reconstruction of Alamo South Lamar will be over in time for Fantastic Fest, but SXSW knows it's down four very important screens this year. Luckily, the new Topfer Theatre at the Zach Theatre on South Lamar is available. "We're really excited," said Pierson, who called it "a great room … 420 seats, gorgeous, brand new live theatre. It's going to be wonderful." Then there are the old reliables: The Violet Crown, the Alamo Ritz, and the Paramount will open their doors, while rooms at the Austin Convention Center and the Rollins Studio at the Long Center will become temporary (and very comfy) screening rooms. For anyone afraid of the walk, Pierson said, "We'll have seven shuttles."

There will also be more satellite screenings at Alamo Slaughter Lane and Village, running March 8-14 and aimed at Austinites who don't want to plunge into the full SXSW madness. "It's not the same experience," she said. "We're not promising that all the cast and directors and everyone will be there. Some of them will be, but it's a satellite screening, without the hassle of coming down town."

When it comes to filling the schedule, SXSW remains a balancing act, between big studio releases (previously announced headliners like The Evil Dead and The Incredible Burt Wonderstone), first-time indie dramas, complex documentaries, and experimental oddities. With the bulk of the features announced (shorts and the eagerly anticipated Midnighters are still to come), Pierson said she's now seeing "these themes and funny clumpings that emerge. They're not intentional, but they emerge from the films that strike us and reach out to us."

"There's a lot more, dare I say it, popular entertainment in the program." What may surprise, she said, is who is making them. "Joe Swanberg (Silver Bullets, Hannah Takes The Stairs) and Bryan Poyser and Jake Vaughan are filmmakers who are very familiar to SXSW audiences and Austin, [and] they're filmmakers associated with microbudget filmmaking. … Each of them, complete independent of one other, made films with terrific casts that each have their voice, but are really entertaining films. You could put them in a multiplex, and people would really enjoy them."

2013 is less genre-heavy than 2012, but one big growth area this year is LGBTQIA programming. Pierson said, "Last year, there was one film that kind of had that element to it, and this year there's a lot. They're all interesting films for different reasons." High on that list, she said, "There's Before You Know It, which is about aging men who happen to be gay, and then there's Big Joy, which is this longitudinal study of this filmmaker/poet James Broughton who comes out in his middle years." That may be what really links both movies, and provides a kinship to I Am Divine (studying John Waters' muse) and Malcolm Ingram's history of New York's famous bath house Continental. Pierson said, "You're looking at a whole life."

There's also a few stage-to-screen adaptations, including Joss Whedon's vaguely mysterious Much Ado About Nothing, and Daisy Von Scherler Mayer's version of Neil LaButte's Some Girl(s). Pierson said, "There were more that we were looking at, but it ended up being less when we got to the final program." Aside from those dramas, there are also some behind-the-fire-curtain docs. "There's a film, Improvement Club, it's about an avant garde theatre club trying to get their show made, and We Cause Scenes is not straight theatre, so to speak, but it's about creating theatrical environments in a technological, interconnected kind of way."

Part of the balancing act is how SXSW Film is the third leg of the festival, along with Music and Interactive. Music gets its own sub-category with 24 Beats Per Minute, while the tech scene has a strong presence through the headliners (Alex Winters' decade-in-development Napster doc Downloaded) and documentaries such as TPB AFK: The Pirate Bay Away From Keyboard and even We Cause Scenes). Pierson said, "It's about these people who create these happenings, but really the background is about how technology has changes. When it started, it was a bulletin board, and now it's MP3 events, and you see how our lives have changed through our technology."

When it comes to Texas films, there's been an embarrassment of riches. Last year, SXSW dumped its dedicated Lone Star States strand: The logic was that, if Texas films were good enough to earn a slot, they didn't need a protective shield. Pierson said, "It was kind of controversial, because filmmakers thought it was kind of a second class category." No such distinction this time: Three of the top-reviewed films from Sundance - Prince Avalanche from Austin transplant David Gordon Green, John Nichols' Mud and Richard Linklater's conclusion to his intimate romantic saga Before Midnight - are Texas product. All three are booked for a triumphant homecoming at SXSW, but Pierson has also secured a swath of world premieres for Texas movies. Austin's own Emily Hagins unveils her latest, the Kickstarter-funded Grow Up, Tony Phillips, while Katie Graham's roleplaying comedy Zero Charisma is hoping the D12 rolls its way. Then UT's defining documentarian Paul Stekler tackles race and politics in New Orleans against the background of Katrina reconstruction in Getting Back to Abnormal. Again, there were so many good and great Texas films that Pierson finally had to just draw a line. Pierson said, "I think there were 46 films submitted just from Austin, and that doesn't include people who used to live in Austin or were just passing through here."

As always, there are always the films that surprise Pierson about how much they engaged her. In a time when everyone and their cousin is working on a Burning Man doc, Steve Brown and Jessie Deeter's Spark: A Burning Man Story grabbed her "because it's not just, oh, here you are, Burning Man. It's the business behind Burning Man, how do you deal with the growth of Burning Man." Even more surprising to Pierson was The Other Shore, about Diane Nyad's plan to swim between Florida and Cuba. She laughed thinking about it. "Some subjects don't want themselves to be filmed," she said. "How could anyone could make a good film about a marathon swimmer? How is that possible? But I really think the film's terrific. It's so interesting, this intimate look at this driven personality, this ambition and this obsession."

• Drinking Buddies: "It's got kind of a cool, low-key quality to it. Olivia Wilde is fantastic in this and Burt Wonderstone. I didn't really know who she was, because I'm not very actor-driven, but what a terrific actress-comedian. … We're just passing the film around in the office, and people who either knew Joe [Swanberg] or didn't know Joe or have an attitude about Joe, every single person is like, 'Wow, I really like this movie.'"

• Before Midnight: "What a masterpiece. We won't overhype it, because it's two people talking, but I love that movie so much, and it's just a crowning achievement for Rick [Linklater]. I was sitting in the audience at Sundance, kind of overwhelmed by the fact that my life had intertwined with him and I'd moved to Austin because of him, and he's the spiritual leader for all of us. What a great guy, what a great artist."

• Pit Stop: "From the first scene, there's something really special about it. It's so moving and beautiful."

• Computer Chess: "Just fucking nuts, but it's crazy and wonderful and inventive."

• A Teacher: "This was one of the first films we were excited about in the programming process. We loved it. It's so simple. Once again, a great hand."

• Our Nixon: "[Nixon staffers] Haldeman and Ehrlichman were enthusiasts, so they shot Super 8 footage. It's their shooting of the Nixon White House when they were first there, from their perspective, before they knew any of the shit that was going to happen. It has this incredible perspective of time."