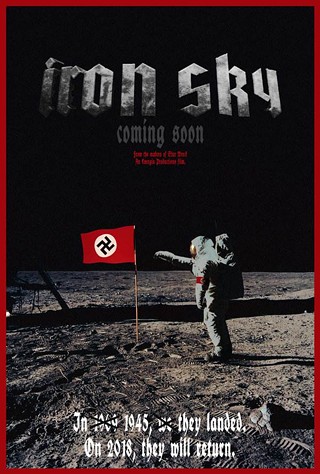 Any film that stars Udo Kier as a Nazi is comedy gold in our book and Iron Sky, from Finnish director Timo Vuorensola, is a crackerjack bit of Aryan tomfoolery, this despite the fact that the film is essentially a one-note gag strung out to feature length.

Iron Sky's beautifully retro vision of the master race on the moon is great fun, especially if, like Indiana Jones, you hate Nazis. And who doesn't? Apart from Mahmoud Ahmadinejad and the Red Skull, no one, that's who. Iron Sky's very premise sells the entirety of the film and while not every jape hits its target, the overall effect is pure fanboy-centric fun.

In the waning days of WWII, German scientists managed to design a spacecraft capable of landing on the moon, where, ever since, the last vestiges of Hitler's mad dream have survived and thrived on the dark side (literally and, I suppose, figuratively as well). Led by Kier's equally demented Führer Kortzfleisch, they're preparing to return and create the Fourth Reich.

It's 2018 and Sarah Palin (Stephanie Paul) is in the White House when a chance encounter between an American astronaut and a moon Nazi results in Korzfleisch's decision to invade the earth as soon as possible via Project Gotterdamerung, a gigantic space armada replete with swastika-branded fighter ships and hyper-obedient moon-Germans.

Iron Sky's weakest link, strangely, is the relationship that develops between blonde Aryan goddess/school teacher Renate Richter (Julia Dietze) and African-American astronaut James Washington (Christopher Kirby), the latter of which has arrived on the moon to foil the Nazi plot. The jokes here are too obvious and the characters played too broadly to be truly transgressive, and at times the whole film seems to be sliding into some sort of wild meta-self parody.

Still, Iron Sky looks like a million deutschmarks (part of the film's funding was crowdsourced on the internet) and it's a surreal pleasure to watch. And Udo Kier? Unhinged as ever.