The Secretary and the Reading Rainbow 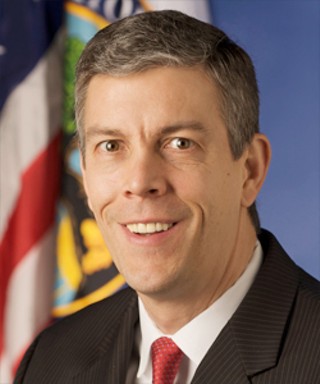 US Secretary of Education Arne Duncan: A little bit of the Chicago Way at SXSWedu

Last year's inaugural SXSWedu conference was a low-key, mostly in-state affair. Looks like SXSWedu 2012 is swinging for the bleachers, with the announcement that US Secretary of Education Arne Duncan joins child literacy icon LeVar Burton on this year's list of keynote speakers.

SXSWedu is the education-centered spin-off from the core SX brand (much like SXSW Eco is for environmentalism) and runs March 6-8 (directly before the SX leviathan emerges, and yes, we will be there for every note, frame and byte.)

Duncan isn't exactly flavor of the month with a lot of progressive groups. His tireless championing of charter schools, both in the Obama administration and as CEO of Chicago Public Schools, has always been controversial amongst public school advocates: The fact that such initiatives were tied to his Race to the Top dollars has never sat well with many people. However, his recent criticisms of No Child Left Behind and what he called its "artificial goal of proficiency" has been taken as a signal that the Obama administration may start to distance itself from the failed Bush 43 policy.

That all makes Burton a far less controversial a keynote pick. Hey, who could hate Star Trek: The Next Generation's Geordi LaForge? A little over a year ago, he announced via Twitter that he's working on bringing back his hugely influential PBS show Reading Rainbow. Yesterday he Tweeted that he was shooting video assets for the app (and he sent a picture to prove it.) Could there be a better place to launch Reading Rainbow 2.0 than SXSW?

And yes, we will try to avoid our own Troy-meets-LeVar moment