Miike, mumblecore faves and more than your screen can hold 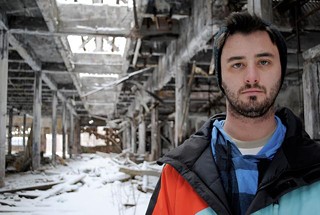 Where Soldiers Come From, one of the dozens of movies announced today for SXSW 2011

Cineastes, breathe a sigh of relief: The lineup for SXSW 2011 is out!

You can read the full listing here, but here's the quick skinny and a few highlights. Trust us, there is lots more to talk about: Our quick list barely scratches the surface, and there are still Midnighters, SXFantastic Features and the shorts program to announce yet.

Check back here for fuller lists, more details and trailers over the days ahead.

Thumbsucker director Mike Mills teams with Ewan McGregor for Beginners, while Fantastic Fest fave Ti West brings his new creeper The Innkeepers to town. The list also includes Reggie Rock Bythewood's eagerly awaited One Night in Vegas about the friendship between Tupac Shakur and Mike Tyson, and Fubar: Balls to the Wall, the sequel to 2002's Canadian headbanging oddity Fubar.

The spotlight for new talents returns. Expect a lot of eyes on the return of two mumblecore mainstays: Greta Gerwig stars in The Dish and the Spoon, while Joe Swanberg snagged Ti West for his werewolf flick Silver Bullets.

The slot for films by Texans and about Texas returns, complete with Emily "Zombie Girl" Hagins' antidote to Vampires Suck, My Sucky Teen Romance, and Nobelity director Turk Pipkin's Building Hope (an early cut of which screens Thursday, Feb. 3 as part of the Austin Film Society's Docs-in-Progress series: Tickets here.)

What's a film festival in the live music capitol of the world without music docs? Featuring modern rock gods The Foo Fighters, New Orleans jazz in Live at Preservation hall: Louisiana Fairytale, and a little something called Outside Industry: The Story of SXSW.

Since the world is coming to Austin anyway, they'll be bringing their movies with them. Check for passports from Israel (Andante), Denmark (Armadillo) and more.

The cream of the crop that has already debuted elsewhere, including Werner Herzog's 3d debut with Cave of Forgotten Dreams, Morgan Spurlock's product-placement-busting POM Wonderful Presents: The Greatest Movie Ever Sold and (don't tell the kids) Being Elmo: A Puppeteer’s Journey.

Twilight director and UT alum Catherine Hardwick will be spooling up a special screening of Red Riding Hood, but also make time for one-offs like Buster Keaton's The Cameraman, complete with like soundtrack by Bee vs. Moth. And if you're wondering what Fubar: Balls to the Wall is about, you can catch the original Fubar here.