Billy Bob Thornton may be from Arkansas, but don't mention it to him too often. Such comments brought out his rancor at the Texas Film Hall of Fame awards. 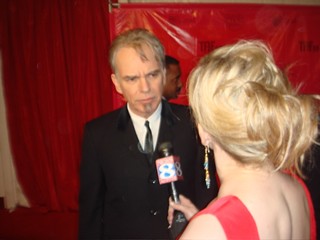 Surprisingly, Billy Bob Thornton may have been the most proud of his Texas roots of any of the group inducted into the Texas Film Hall of Fame on Thursday.

Surprising because he's actually from Arkansas. But he took a bit of offense to the repeated questions about his foreigner status while walking the red carpet and chatting up the media.

“It’s an artistic place, a creative place,” Thornton said. “When they say Texas is bigger, Texas is better, I think they’re right.”

Meanwhile, Larry Hagman, who was born in Texas but mainly raised elsewhere before rediscovering the Lone Star State (and cowboy hats) during the run of television's Dallas, was revealed as the Texas tour guide by his TV wife Linda Gray.

Gray said that n the winter of 1978, Larry Hagman drove the cast of the then-new show around Big D in a converted bread truck introducing them to dive bars and other local color.