Texecutioners Make Their Demands
Weekends don't get much bigger in roller derby: On Friday, the best teams from the Women's Flat Track Derby Association will meet in Philadelphia for the 2009 Declaration of Derby national finals. As befits the founding mothers of the sport, Austin's own Texas Rollergirls took the time to list their rider requirements.

Flat Track Update
The Texas Rollergirls' home season may be over, but that doesn't mean all is peaceful in the land of flat track. First things first: You may have seen a billboard for the Mansion of Terror haunted house with a young woman being threatened by a ghoul: that's Scream Queen contest winner Big Nasty of the TXRG Rec'n'Rollerderby league. The woman, not the ghoul.

Meet the Real Babe Ruthless
As fits a film about Austin's other favorite sport, there's been a lot of derby love for Whip It. Tonight there's an opportunity to meet the real Babe Ruthless at the Alamo Ritz, and Wednesday night the TXRD Lonestar Rollergirls will be ready for their close up.

One More Win Before Regionals
On Sunday night, after the Texecutioners beat the visiting Bay Area Derby Girls, Texas Rollergirl Crackerjack grinned broadly. "Guess how many times I went to the penalty box?" she asked. "Zero!"

B.A.D. Girls go to Austin
Interesting test for the Texas Rollergirls tonight: The Bay Area Derby Girls All-Stars, ranked #5 in the West, fly in to face the Texecutioners, currently #1 in the South Central region. 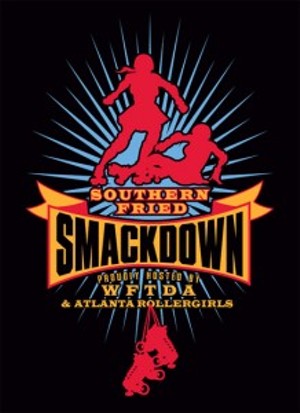 TXRG Still Number One
The national flat track Roller Derby season has begun in earnest as the Women's Flat Track Derby Association has posted the seeding for the 40 teams to make the upcoming regional tourneys (see the full list here). This is the first year with four regions rather than two: In three of the four regions, there are few surprises amongst the top ranked teams. Austin's own Texas Rollergirls head in to September's Southern Fried Smackdown in Atlanta topping the South Central region, while the East is dominated with the no-surprise line-up of New York, Philadelphia and Baltimore. No real shockers in North Central either, with the great lakes pairing of Windy City and Detriot large and in charge. But the world has changed in the West. The fast-rising Oly Rollers take the top slot: No mean feat, considering they only joined WFTDA last year. They're flanked by the Denver Roller Dolls and Rose City Rollers. That's a big switch from the last couple of years, where the previously indomitable Rat City Rollergirls and the B.ay A.rea D.erby Girls (who visit Austin on Sept. 6) ruled the Pacific shores. The seeding counts: Only the top three teams from each region get through to nationals in Philadelphia in November, and the bottom four seeds in each region have to get through an extra first round to make the cut.

Hotrod Two Times
Sunday's Texas Rollergirls championship ended the way most fans expected: With the Hotrod Honeys taking the title for the second year in a row. But more fittingly, it ended the only way it really could, with Barbarella of the Hustlers and Honeys captain Cat Tastrophe shoulder to shoulder on the jam line for the last time ever. They are amongst the last of the 2003 veterans of the league, and every time they sparred against each other, it was always great Roller Derby. This was no exception. Whether it was just the intensity of the title situation, or that so many players were in their final league bout, but this was TXRG skating at another level. The curtain-twitcher was the nail-chewing third-place play-off. The Hell Marys hadn't won all season. The Honky Tonk Heartbreakers came into the season as the favored challengers for the dominating Hotrods, but that wasn't to be. And from the first whistle, it was clear the Heartbreakers were showing no mercy. Olivia Shootin' John may have been wearing the jammer star, but was blocking Bloody Mary straight off the line.

Texas Rollergirls Retirements
Sunday night's Texas Rollergirls' doubleheader was a night of two distinct halves. The championship bout was a fascinating clash of styles, as the Hotrod Honeys took the title with an 88-24 win over the Hustlers, while the third-place playoff saw the Hell Marys push the Honky Tonk Heartbreakers through a nail-biter, ultimately falling short 43-45 on the very last jam (full recap tomorrow). [video-1] But the bittersweet edge to the night was the number of big name retirees, including some founding names of the sport like Bettie Rage, Electra Blu, and Cat Tastrophe. Hotrod captain Cat and fellow retiree Grudge Judy of the Heartbreakers talked about why they're leaving the track behind, and what the sport has meant to them. 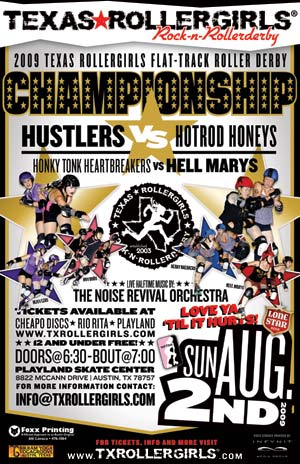 Flat-Track Finale
Can it really be the Texas Rollergirls championship bout already? Yup, sad to say, flat-track Roller Derby fans, Sunday night sees the last league play of the 2009 season. The main event features this season's most improved versus the most dominating team in the league. The Hustlers put all the pieces together this season to go 2-1, but reigning champions the Hotrod Honeys put the hurt on them at last month's match-up as part of their perfect season. The question is, will this be a repeat, or an upset? Last time, both teams were down some of their star jammers, so it could be a very different lineup in the big game. The grudge match battle for third place could get gritty. The 0-3 Hell Marys have this one last chance to get a win this season, but the 1-2 Honky Tonk Heartbreakers will be looking to shut that door. The action starts Sunday, August 2 at 7pm (doors 6.30pm) at Playland Skate Center (8822 McCann), tickets $12 advance or $15 on the door.