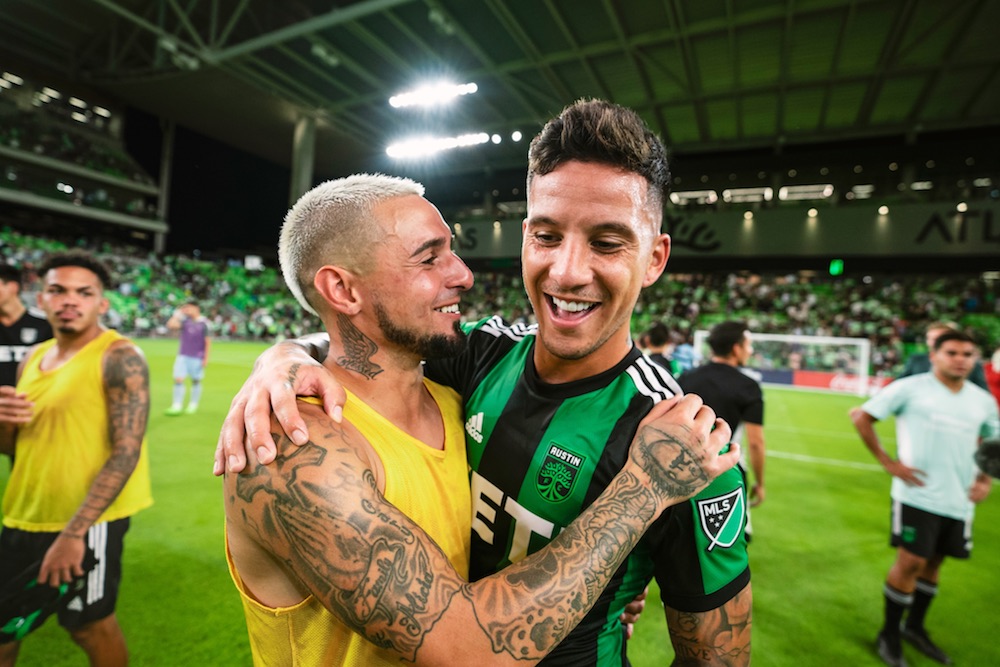 It takes something really special to get Josh Wolff out of character, especially with a microphone in front of him. But the habitually measured Austin FC coach was something far away from that following his club’s “euphoric” (his word) 4-3 victory over Sporting Kansas City at Q2 Stadium Saturday night.

“The intensity with the fans was incredible. I don’t think I’ve ever experienced anything like that. For me that’s about as memorable a moment as I’ve ever had as a coach,” Wolff said through a grin that, this time, he could not hide. He couldn’t hide the stains of freshly tossed beer across his signature green Bonobos shirt either, or the rare locks of hair pushed astray from his typically tidy coif. He even threw a Tiger Woods-esque fist pump toward some onlooking supporters who were doubtlessly experiencing the same emotional high.

The “moment” he was referring to, specifically, was Sebastián Driussi’s stoppage time winner, the league’s best player scoring his league-best 17th goal, few more memorable than this one. Not for its technical extravagance – by Driussi’s standards, in fact, it was a relatively routine finish – but in that when Driussi’s shot hit nylon and the Argentine superstar ripped off his jersey to celebrate with the south stand, it represented the climax of an adrenaline-fueled 100 minutes of soccer that saw Austin FC turn yet another two-goal deficit into not only a result, but a win.

Which of course naturally means that, yet again, the Verde and Black found themselves Saturday night in an early hole, having let Sporting KC, the Western Conference bottom dwellers, seize a 2-0 lead in the opening 23 minutes. Both came off rebounds offered up by ATX goalkeeper Brad Stuver. While in fairness, the second one was hardly an error, Stuver took responsibility for both in the halftime dressing room, according to Wolff.

Jon Gallagher restored some order in the 27th minute, striking home a volley from his left back position to halve the deficit. But a sloppy challenge from Ethan Finlay in the Sporting KC penalty box granted the visitors a spot kick in 40th minute, which Johnny Russell converted to send both teams to the break separated by a 3-1 scoreline.

“The first thing I said [at halftime] is, ‘The last thing we need to do is panic,’” Wolff said. “We don’t throw the plan out the window. We took a shot in the face. So what? That’s life, man. You got to pick yourself up and keep moving.”

The Oaks did exactly that, dominating the second half with help from a deep bench of substitutes. After Julio Cascante made it 3-2 with a header in the 63rd minute, one of those substitutes, Danny Hoesen, rifled a gorgeous waist-high volley into the side netting for the equalizer in the 85th. After a massive roar, Q2 Stadium had about 10 minutes to catch its breath before Driussi completely brought down the house with the match winner.

The 3 points further solidified Austin FC’s place as a top-two team in the West, with 9 points separating El Tree from third place. Next up, an Aug. 20 trip to the Twin Cities to take on fourth-place Minnesota United, where Austin FC will look to improve on its MLS-best eight road wins in 2022.