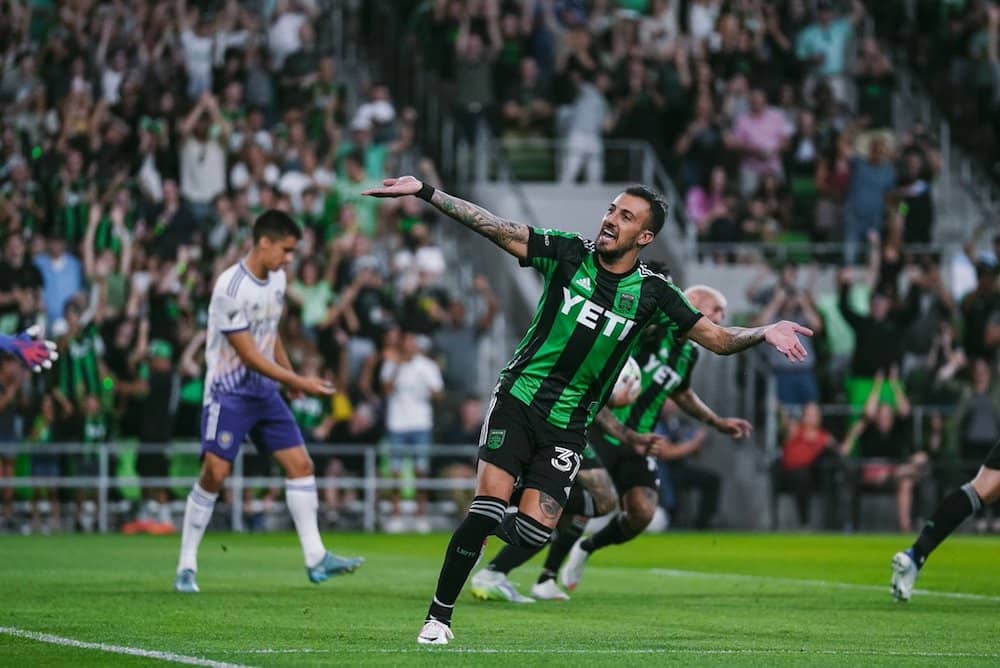 Austin FC’s reign at the top of MLS lasted all of four days as the Verde and Black dropped points at home against Orlando City SC in a chaotic 2-2 draw.

A pair of first-half miscues at the back put the Central Texas side in an 0-2 hole at Q2 Stadium for the first time in nearly 10 months. But a late Verde charge sparked by not one, but two Orlando red cards and capped off with a Moussa Djitté equalizer in stoppage time allowed the hosts to rescue the draw, even if they felt more was on the table.

“Given what the first half started like, I would say yeah, [it was a fair result],” head coach Josh Wolff said. “[But] given what it ended like, with [them having] nine guys, I’d say we should win.”

No MLS club asks more of its goalkeeper in terms of playing the ball with his feet than Austin FC does of Brad Stuver, and the 31-year-old has proven he has the skill to meet those demands the vast majority of the time. But it seems like every handful of games, Stuver is good for one brutally misplayed pass that gives the opposition an instant goalscoring opportunity, and Orlando made no mistake with theirs less than two minutes into Sunday night’s contest. Attempting to chip a pass over the head of Orlando midfielder Júnior Urso, Stuver instead played the ball straight to Urso, who made one pass to striker Ercan Kara for the easy finish.

“I’m pissed at myself. I’m shocked at myself that [the pass] doesn’t come off. That’s on me,” Stuver said. “Putting your team down like that in the first two minutes obviously changes the dynamic of the game.”

As did the unexpected exit of ATX center back Ruben Gabrielsen in the 20th minute after the Norwegian keeled over with stomach issues and could not continue. Rookie center back Kipp Keller subbed in for Gabrielsen, and the Austin backline could not get organized in time to deny Orlando’s second goal in the 22nd minute. Mononymous fullback Ruan buried a rebound after Stuver saved the initial chance.

The tide began to shift, however, in the 58th minute, when Jon Gallagher’s shot from just outside the box collided with the arm of Orlando center back Rodrigo Schlegel, earning Schlegel a yellow card. Then, on the ensuing free kick, Sebastián Driussi’s shot also hit Schlegel in the arm, which also warranted a yellow card, and Orlando dropped to 10 men. And because Schlegel was inside the 18-yard box when the handball occurred, Austin FC was given a penalty kick, which Driussi covered for his eighth goal of the season.

And before the clock could tick to 70, Orlando suffered another sending-off when César Araújo saw straight red for violent conduct on ATX captain Alex Ring. “He kicked me in the jewels,” Ring reported after the match.

For the remaining 20 minutes, Austin FC held nearly 100% of possession as Orlando parked what was left of its bus. With no shooting lanes available, the Oaks swung in dozens of crosses from the wings for header opportunities but couldn’t find the back of the net. That is, until one of those crosses found substitute striker Moussa Djitté at Orlando’s back post in the fifth minute of stoppage time for the equalizing goal.

Once again in the second-place spot in the Western Conference, Austin FC heads back to Los Angeles County to face LA Galaxy on Sunday, May 29, just three weeks after falling to the Galaxy at Q2 Stadium earlier this month.