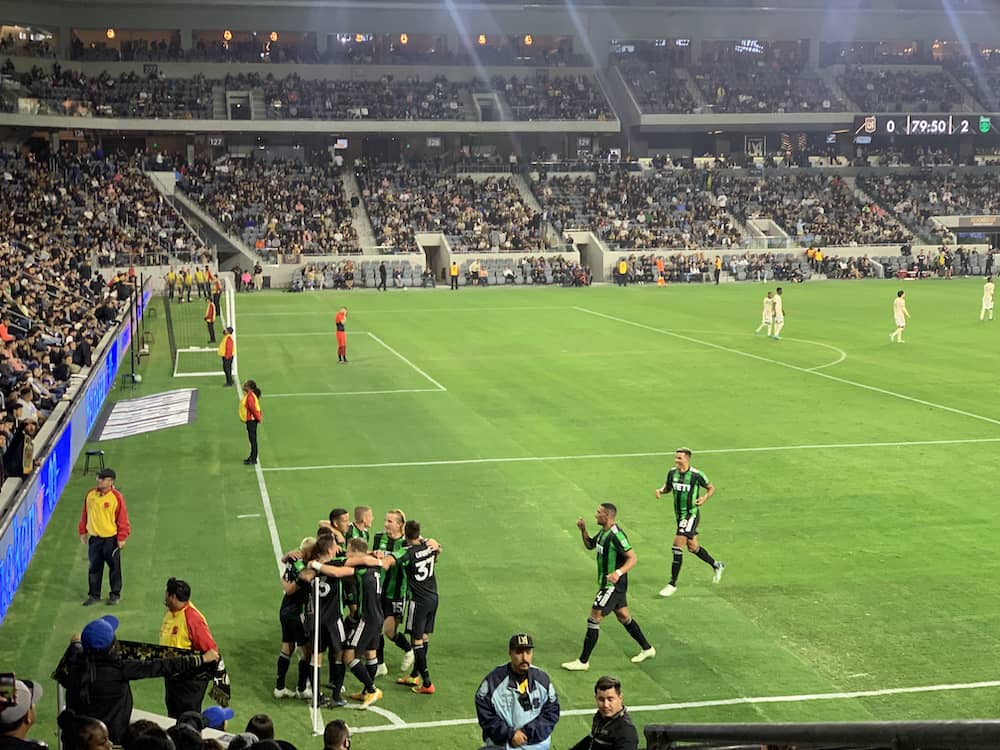 Thirteen months ago, Austin Football Club took the pitch at Banc of California Stadium for its first match ever as a Major League Soccer franchise. Wednesday night, it left that same field as the newly-minted No. 1 team in the league.

The Verde and Black topped (former) Supporters’ Shield pacesetters LAFC, 2-1, in a thrilling late-night duel in downtown Los Angeles. Goals by Ruben Gabrielsen and Diego Fagundez held up against a late Angeleno flurry – punctuated by a Carlos Vela goal from the penalty spot in the 86th minute – thanks in large part to the return of star goalkeeper Brad Stuver to action after missing two games with a lower-body laceration.

“It just shows how much we’ve grown as a team,” Stuver said postgame. “You see the grit, you see the grind, you see the chemistry that the guys have, but this one just feels a little bit different. Being able to take points here is something special.

“This is a statement game for us.”

Stuver made six big-time stops, including a trio of tremendous kick-saves, and earned Man of the Match honors, though the accolade could have gone to a number of his teammates as well. Gabrielsen was rock-solid in defense against one of the most potent attacks in MLS, and also scored the opening goal, his second of the season, in the 13th minute. His turn-and-chip finish looked more like the work of a seasoned striker than a burly center back.

With Dani Pereira serving a one-game red card suspension, Alex Ring returned to his spiritual home in defensive midfield and looked – perhaps unsurprisingly – like the Alex Ring of 2021. The ATX captain made life difficult all night for Vela and the LAFC attack, clogging holes and stopping scoring chances before they could materialize, while also providing a pivot point for the Austin offense.

“He’s quite comfortable right there in the middle,” head coach Josh Wolff said of Ring. “He hung in there and fought as captains should. He’ll continue to play in different spots for us.”

And then there’s the duo of Sebastián Driussi and Diego Fagundez. The pair combined twice to create Austin FC’s best two scoring opportunities of the match. The first, in the 23rd minute, resulted in a wide-open Fagundez inexplicably dinging his shot off the cross bar. It would have haunted the Uruguayan all week if not for the second beautiful feed from Driussi in the 80th minute, which Fagundez cleanly deposited into the LAFC goal to double the ATX lead.

After Vela’s penalty goal – which he won thanks to a clear foul by Stuver in the box – LAFC was nearly awarded another kick from the spot to potentially tie the game in the 89th. A possible foul by rookie ATX defender Kipp Keller on Diego Palacios sent referee Armando Villarreal to the video monitor for a second look. Much to Wolff’s relief, Villarreal eventually waved off the penalty shout, all but solidifying a result which will go down as Austin FC’s most impressive victory to date.

“I can’t say enough about the guys’ spirit and resiliency,” Wolff said. “Nights like tonight don’t happen if we’re not in the space that we are [mentally] and I’m really proud of the way this group continues to grow.”

Austin FC landed in Southern California intent on making a statement, and you can bet the result will turn heads across the league. MLS has no greater test in 2022 than facing LAFC on their home turf. If the Oaks can conquer that battle, and they have now proven that they can, there’s simply nothing the league can throw at them that is out of reach.