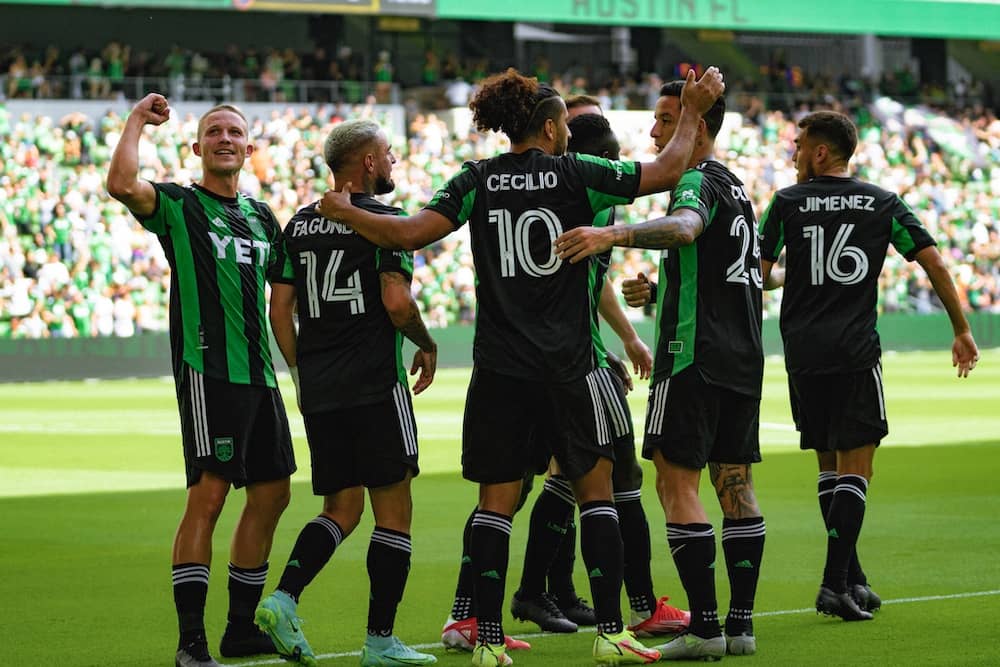 Austin FC rewarded any Verde fans who chose Q2 Stadium over Zilker Park Saturday, keeping the “darty” atmosphere alive with a 2-1 win over Real Salt Lake in an afternoon matinee.

The Oaks secured their second home victory in as many weekends, the first time in history the club has won back-to-back home matches.

In between, head coach Josh Wolff significantly rotated his squad for a Wednesday road match against the Colorado Rapids, which resulted in a 3-0 loss. Wolff drew plenty of criticism for the move, but was justified in a way as Austin FC looked rested, healthy, and dangerous for the full 90 minutes at home.

“There maybe could have been a couple things different on Wednesday, but this is why we do it,” Wolff said of the need to make changes. “Tonight was some fantastic soccer. Some really good opportunities. It should have been 5, 6-1… We had our entire group out there in a pretty good state to play and compete.”

Austin FC has become locally famous for its fast starts to matches … though generally without anything to show for them. This time, however, another solid opening 20 minutes came with a payoff at the end as Cecilio Domínguez gave the Oaks a 1-0 lead in the 17th.

As they have been for many of Austin FC’s best attacking moments in recent matches, summer signings Moussa Djitté and Sebastián Driussi were both at the center of the goal. Djitté caused the initial havoc in the box, allowing Driussi to rip a shot saved by Salt Lake keeper David Ochoa. Domínguez buried the ensuing tap-in for his sixth goal of the season, but his first in eight games.

Defensively, Austin FC held Real Salt Lake without a shot on target in the first half.

Ten minutes into the second half, the Oaks doubled their lead, and it was Domínguez again with the finishing touch. The beauty was in the build-up, though, as Driussi launched Diego Fagundez into space with a spectacular chipped pass. Fagundez drew the keeper’s full attention, then crossed to Dominguez at the back post for another tap-in.

Real Salt Lake pulled one goal back against the run of play in the 64th minute when Damir Kreilach took advantage of an untimely slip by ATX center back Julio Cascante. It was RSL’s first shot on target of the match.

But that was about the extent of the RSL threat during the match, and ATX was a bit unlucky not to find at least a third goal. Ochoa came up with several key saves in the second half and Djitté had a penalty claim denied, the second time in as many games Austin FC has been on the wrong end of a very questionable no call. In his post-match media availability, Wolff called the refereeing in recent matches “bogus” and “not right.”

“We’ve been on the wrong side of it way too often, and it’s somewhat disrespectful. But as I say to the players, we’re the new team to the party right now, we don’t have the points that other teams have, and this is a reflection of it.”

Josh Wolff's full comments on refereeing in the past two matches (and beyond), feat. the #AustinFC press corp: pic.twitter.com/We3pAVaYfy

Austin FC outshot RSL 18 to nine, including eight to three in shots on target. The club now has two consecutive comfortable home wins against playoff-caliber position, and a clear optimal lineup is beginning to form since the most recent wave of signings have been integrated.

“We’re happy,” Domínguez said. “We’re happy that we have everyone in their [best] position, and today’s victory, that’s what it can look like.”

Austin FC can now enjoy a two-week break before its next match on Oct. 16 at home against Minnesota United. But the action at Q2 Stadium is only set to ramp up, with the United States Men’s National team set to take on Jamaica in a crucial World Cup Qualifier match Thursday night.