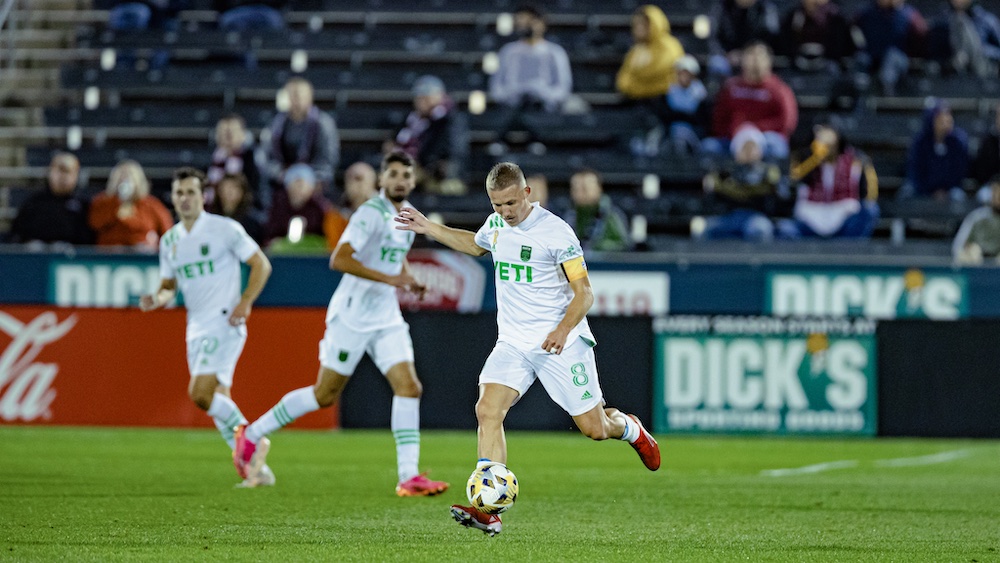 Austin FC captain Alex Ring, a midfielder, was asked to fill in at center back against the Colorado Rapids (courtesy of Austin FC)

Austin FC suffered a deflating 3-0 loss to the Colorado Rapids Wednesday night in Denver, sapping all momentum from the club’s impressive win over the LA Galaxy three days earlier.

A negative result seemed all but inevitable from the moment head coach Josh Wolff named his starting lineup for the match, featuring a staggering seven changes from the 11 that took the field in Sunday’s rare win. Despite repeatedly emphasizing all season the club’s need to better sustain momentum and string good results together, rest and squad rotation took priority for the second of three matches in a seven-day period.

Key attacking contributors Sebastián Driussi, Moussa Djitté, and Diego Fagundez did not travel with the club to Colorado, while Cecilio Domínguez, Julio Cascante, Žan Kolmanič, and even – for the first time all season – goalkeeper Brad Stuver all sat out either the entire match or much of it.

“It has to do with the schedule. … That’s the reason there was such significant squad rotation,” Wolff said. “We had to keep our eyes on what we felt could get us the most points through these three games.”

For 45 minutes, the Verde B-Team held its own against the third-place club in the Western Conference, ceding the majority of possession and some decent scoring chances but keeping the match scoreless. That was a notable feat considering the makeshift defense put together for the first half. Goalkeeper Andrew Tarbell, making his first MLS appearance for Austin FC, had only 23-year-old Jhohan Romaña for protection in terms of natural center backs. Nick Lima, an outside back, and Alex Ring, a midfielder, also lined up in central defense while Manny Perez – an attacking player – slotted in on the right flank.

Austin FC did not do much attacking in the first half, but McKinze Gaines nearly gave his hometown club a lifeline in the 36th minute. Gaines used his elite sprint speed to separate from Rapids defender Lalas Abubakar and chase down a loose ball into the Colorado half. Once in front of goal, Gaines slowed to set up his shot, then took a stiff arm to the shoulder from Abubakar which interrupted the shot. The penalty call was missed by referee Michael Radchuk and not overturned by video replay.

Austin FC players and coaches were livid. Still visibly feeling the frustrations of the no-call, ATX conceded the opening goal right before halftime when a Jonathan Lewis header – a poor one which was not on target – deflected off Lima and past Tarbell for an own goal.

Then, less than 30 seconds into the second half, Colorado capitalized on another Austin FC blunder. With the ball at his feet, Tarbell passed directly to Rapids midfielder Nicolás Mezquida, who happily deposited the ball into Tarbell’s net to make it 2-0.

The Rapids scored their third off a corner kick in the 59th minute as Auston Trusty simply outjumped Cascante – subbed on in place of Romaña moments prior – to head the ball into the net.

It’s not difficult to imagine an alternate universe where Gaines’ penalty is given and scored, Tarbell makes a better decision on his pass, and either Lima or Cascante do better in their defensive moments and Austin FC escapes with a 1-1 draw. But it would have been a Houdini act given the choices made in player selection. After the match, Wolff admitted he went a bit overboard in rotating the squad. “That’s where I got it completely wrong. Too many changes that disrupted, certainly, our ability to play.” He also apologized to the team post-match.

“I told these guys, ‘Don’t let this have any effect. I got this wrong. That’s my responsibility and I screwed that up. Let’s pick ourselves up, quickly put this behind us and get ready for another good game at home.’”

If Austin FC can win that match, an afternoon clash with Real Salt Lake at Q2 Stadium, and in doing so take two wins out of three in a seven-day period, the decisions made Wednesday will probably be justified. A certain amount of squad rotation is crucial for any club facing such quick turnarounds between games.

“For the guys playing a lot of minutes, it’s tough,” forward Jared Stroud said of the midweek matches, adding a bit of context from his prior MLS experience. “At [New York] Red Bulls, we switched the whole lineup on Wednesday. Even more dramatic… At the end of the day we were all ready to play, and it’s a really good opportunity for all the guys, so we were excited.”

As it stands, Austin FC added a 17th tally to its league-leading loss total and now face a difficult test against an RSL squad battling tooth and nail for playoff positioning. After that, though, a rest. The club’s following match comes a full 14 days later as the U.S. Men’s National Team heads to Austin for World Cup Qualifying.