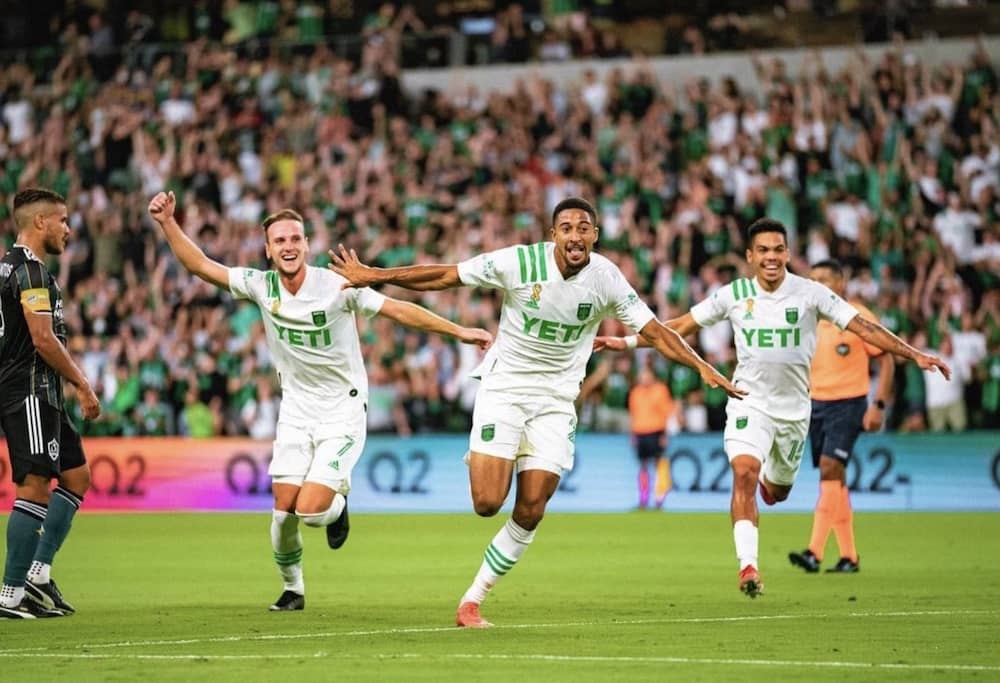 Austin FC captured a rare but deserved home win Sunday night against the LA Galaxy, 2-0, thanks to a complete 90-minute performance the club hopes is indicative of things to come in the near future.

After being forced to make do for most of the season without a true striker, Austin FC saw not one but two center forwards bag maiden goals in Verde as Moussa Djitté and Austin-native McKinze Gaines both powered home chances in the box.

Add to that the club’s first shutout in 15 games, the quality of the competition – LA is in the thick of the Western Conference playoff race – and the fact that the match was nationally televised on ESPN2, it’s far from a stretch to call it the biggest win of Austin FC’s inaugural season to-date.

There was a palpable big match atmosphere in the stadium from well before the opening kickoff. Pregame warmups drew extra attention as fans – especially those with ties south of the border – jockeyed to get a glimpse of Mexico’s all-time top goalscorer, Galaxy striker Javier “Chicharito” Hernández. Then, moments before kickoff, the ATX supporters’ section unfurled a tifo, or a fan-produced visual display, for the third time all season. This one? A beautiful portrait of the late Tejano singer Selena, along with the words, “SOMOS DEL EQUIPO DE LA 512,” or “We are with the team from the 512.” The tifo was designed by artist Joel Corral.

This may not be the only feed you see this angle from… pic.twitter.com/Qb7i39AmTl

The first half level of play matched the atmosphere, despite neither team finding the back of the net. LA’s best chance came less than two minutes into the match when Chicharito scurried between Austin FC’s center backs in front of goal, but could not get enough power on his shot. Brad Stuver gobbled up the bouncing ball for his first of seven saves.

With usual captain Alex Ring suspended due to a red card in Austin FC’s previous match, Sebastián Driussi wore the captain’s armband. Fellow Argentine designated player Tomás Pochettino filled in for Ring in defensive midfield, where he played often for his previous club, Talleres in Argentina. He looked comfortable and enjoyed one of his best performances of the season.

But the biggest revelation for El Tree continued to be the imposing Djitté, who flashed not only power and explosiveness but also vision and patience in build-up play. After contributing to two Austin FC goals in a 4-3 loss to the San Jose Earthquakes last weekend, Djitté scored the first MLS goal of his own in the 64th minute when Driussi found the Senegalese striker in space at the top of the 18-yard box. Djitté turned, unleashed a right-footed shot which drew an initial save from LA goalkeeper Jonathan Bond, then chased down the rebound and buried it into the top corner.

Djitté was replaced in the 72nd minute by Gaines, making his second MLS appearance – though his first with any significant time left in the match. Seven minutes after coming on, Gaines reeled in a Nick Lima cross 12 yards out, then hammered a volley into the roof of the net past Bond for Austin FC’s second goal. The Austinite who grew up playing with Lonestar Soccer Club celebrated in front of his hometown fans, who went berserk.

“McKinze Gaines was in our minds from the get-go,” ATX coach Josh Wolff said. “We thought if we could keep this game in a good spot or if we grab a lead we knew we were going to put him in there. He’s done a great job gaining fitness and conditioning. We do a lot of stuff, small-sided stuff [in practice] and he scores goals.”

The win, Austin FC’s sixth of the season to go with 16 losses and four draws, snapped a five-match losing streak. The Oaks still hold the bottom spot in the West and, though not mathematically eliminated, are not a candidate for any kind of playoff race. But Sunday’s victory offers the kind of signature performance Wolff and company can build on as Djitté and Driussi continue to elevate the ATX attack into something legitimately problematic for opposition. The club has scored five goals in its last two matches and 13 in its last seven.

However, a frustrating element of Austin FC’s season has been the inability to turn one good performance into multiple. The Verde won’t have to wait long for their next crack at doing that, with a Wednesday clash in Denver against the Colorado Rapids just 72 hours later, followed by a return home Saturday against Real Salt Lake to complete a three-matches-in-seven-days run. A pair of results could go a long way toward changing the tone of Austin FC’s debut campaign.

“We still have a resilient group,” Wolff said. “We still have a group with plenty of quality. And I think they showed tonight they have real belief, real desire, real intensity, and that’s what needs to be there every week.”