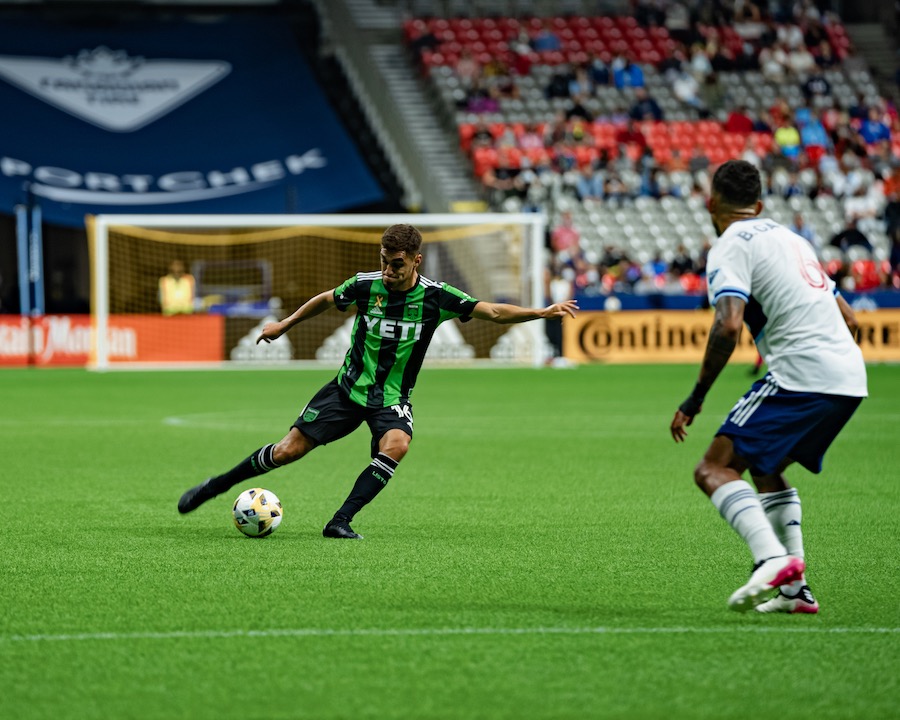 Austin FC defender Héctor Jiménez attempts a pass during a 2-1 defeat to the Vancouver Whitecaps. (photo courtesy of Austin FC)

Same match, different country. That’s what Austin FC’s first international road trip felt like as the Verde lost to the Vancouver Whitecaps, 2-1, for the second time in less than three weeks.

The only difference was the locale, as the Western Conference foes traded sweltering Central Texas for breezy British Columbia. Otherwise, it was copy-and-paste. Again, Austin FC scored the opening goal and had a halftime lead. Again, they saw that lead evaporate. And again, they showed little resistance as Vancouver flipped the script in the second half.

The early signs were encouraging. Austin FC outshot Vancouver 7-1 with the lone Whitecaps attempt off target. The opening goal was a beauty, too. At the tail end of the first half, all three of Austin FC’s designated players combined to break down the Vancouver defense.

Tomás Pochettino, starting for the first time in three matches, skillfully dribbled past Whitecaps defender Janio Bikel and found Cecilio Domínguez open in the box. Domínguez lifted a lob pass across the face of goal, where Sebastián Driussi met it with a powerful header into the back of the net.

A combination of a more aggressive Vancouver attack in the second half and some egregious ATX mistakes forced goalkeeper Brad Stuver into some of his best work of the season. In the 63rd minute, center back Julio Cascante lost his focus – or his contact lens, or something – allowing Vancouver striker Ben White to swipe the ball and go one-on-one with Stuver, who was up to the challenge. Not only that, but the keeper saved a rebound shot just seconds later to keep the game level.

Stuver could not do much to prevent the equalizing goal six minutes later, though. With Austin FC temporarily short-handed with Matt Besler receiving injury treatment, Vancouver defender Érik Godoy, playing up the field, jumped over the back of Nick Lima to head home a cross and make it 1-1.

Vancouver keeper Thomas Hasal made one excellent save to deny a Driussi effort at reclaiming the lead. In the 83rd minute, though, the Canadian club made it 2-1 thanks to substitute Déiber Caicedo, who tapped in a rebound off a Stuver save.

"The guys worked extremely hard, and they stuck with what we were trying to do. We played really well in the majority of this game and were quite unlucky to not win this game, in all honesty,” said Josh Wolff, head coach of the squad with fewer shots, fewer on target, less possession, and, crucially, fewer goals.

Austin FC now sit joint-last in the Western Conference with 19 points (five wins, four draws, 13 losses), tied with their Texas neighbors Houston Dynamo. The two cellar-dwelling clubs face off Saturday, Sept. 11, at BVAA Compass Stadium in H-Town. Austin FC will look to screw on one or two of the wheels that have fallen off the Verde wagon in the dog days of summer.

The Verde Report: Lessons From an Austin FC Collapse
What needs to get fixed if the Verde are going to start winning in a near-ish future