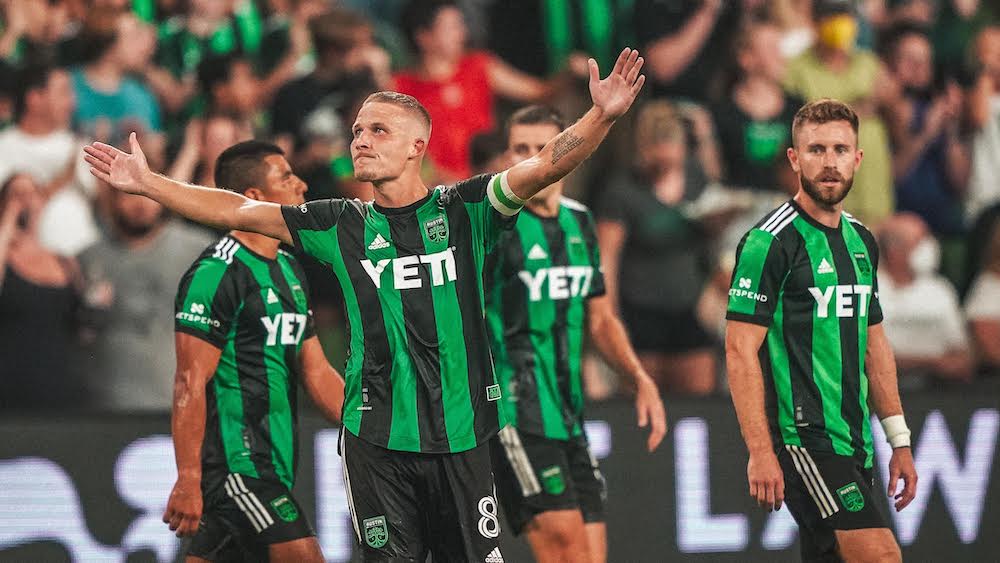 Under the Verde lights Wednesday, Austin FC supporters got a clear and inconvenient answer to a question they really rather hoped not to ask in the first place. Yes, Austin FC is the worst team in the MLS Western Conference.

The Verde confirmed as much with a 2-1 home defeat to the Vancouver Whitecaps in a matchup of the two lowest-ranked clubs in the West. Austin FC squandered a first-half lead and surrendered two second half goals to the Whitecaps, falling deeper into a last place hole and blowing an opportunity to pick up momentum toward a potential second-half surge through the closing months of the MLS season.

Before the match, Austin supporters raised their cell phone flashlights during the singing of the Canadian national anthem in a demonstration against racism. Earlier in the week, a 17-year-old player in the Vancouver academy system was stabbed at a party in what the club has called a “racially motivated attack.”

From the opening whistle through the first half-hour, neither cellar-dwelling squad mustered much in attack. Several of Austin FC’s more promising moments fizzled at the feet of Paraguayan designated player Cecilio Domínguez, who entered the match out of form. After two more egregious giveaways, Domínguez caught an earful from ATX captain Alex Ring. Head coach Josh Wolff too had seen enough, opting to substitute Domínguez out of the match after just 30 minutes in favor of Jon Gallagher.

“I think Cecilio was physically struggling,” Wolff said. “You could see he couldn’t keep pace with the game. Physically he was off, his touches were off, he was giving the ball away, wasn’t able to recover, and it was affecting our ability to play. I don’t enjoy having to do it but I had to do it.”

Just seven minutes later, Ring took the goalscoring responsibilities into his own hands. The Finnish international headed a corner kick across Whitecaps keeper Maxime Crépeau and inside the far post for the goal Austin FC desperately needed. It was the club’s first goal in three games and the first ever score off a corner kick. Sebastián Driussi, who curled in the cross from the keeper’s left hand corner flag, notched his first assist as an Austin FC player.

The Oaks got to enjoy their lead during the halftime break, but gave it away shortly into the second half. Striking from the same corner flag from which Austin got its goal, Vancouver finished off a set piece of their own. After Brad Stuver saved the initial effort, Jake Nerwinski poked home the rebound from point-blank range to level the score.

As the second half wore on, Austin FC tightened its grip on possession and pushed numbers forward in an attempt to retake the lead. But in the 74th minute, Vancouver caught the Verde with its hand too deep in the cookie jar and took the lead off a lightning quick counter attack finished off by Brian White. Q2 Stadium fell dead silent.

Gallagher missed Austin FC’s lone remaining chance to score – an unmarked header put just high of the crossbar – and the club walked off their home pitch having suffered a third consecutive defeat and the fourth in eight matches at home. Despite clinging to nearly two-thirds of possession, Austin FC managed just half as many shots (9) as Vancouver (18) and one-fourth as many on target (2 to 8).

Most significantly, ATX failed to climb off the ground floor of the Western Conference and leapfrog a struggling Vancouver squad that, because of COVID-19 restrictions in Canada, has not played a true home match this season.

After the match, Stuver, who has quickly developed a strong relationship with fans inside Q2 Stadium and beyond, had the Verde faithful in mind. “I know it’s frustrating for them to come out on a Wednesday night, come see us play, and we lose. And they have to go home, they have to sleep and wake up early tomorrow, go to work with that sour taste in their mouth. So I feel bad,” Stuver said post-match. “But it is a process, and I can promise them that we’re doing everything we can at the training facility, everything we can as a group to make this right.”

The Austin squad now faces the potential for things to get ugly in year No. 1 as questions surrounding the performance of Domínguez take center stage. On a brighter side, Austin FC plays its next match at home against the Portland Timbers, a team ATX defeated 4-1 in the memorable first home win in club history. That match is set for Saturday (8/21) at 8pm and will be televised on the CW Austin and UniMás Austin.