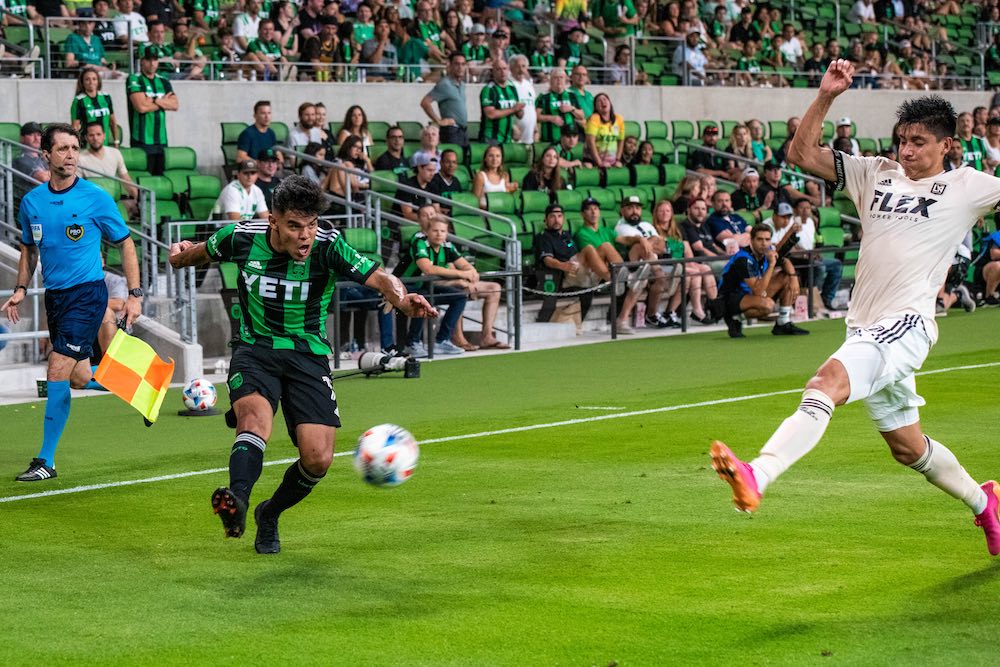 Just when you thought Austin FC had run out of firsts to collect in its debut season, it picked up a sour one Wednesday night against Los Angeles FC at Q2 Stadium: the first home loss in club history.

It came at the hands of the same squad that dealt the Verde its very first defeat in April’s season opener, and by the same 2-0 scoreline. The match sent Austin FC into a two-week MLS hiatus facing old demons.

After putting four goals past the Portland Timbers in last Thursday’s breakthrough home win, Austin FC reverted to its offensive struggles against LAFC and registered its seventh goalless performance in nine weeks. Head coach Josh Wolff has had to answer for a lack of scoring far more often than he’d like through the first third of the season. “It’s a broken record of sorts,” he said. “We’ve done enough in many of these games to come up with more [goals], and that’s the frustrating part. We’ll keep working at it.”

Wolff had two new key injuries to work around in setting his pregame lineup. Forward Jon Gallagher nursed his injured left foot, which was bruised against Portland prior to striking Austin FC’s first Q2 Stadium goal, while midfielder Tomás Pochettino also was unavailable after pulling out of Tuesday’s training session with an adductor strain. Kekuta Manneh, a hometown product, started his first match for the Verde as a result.

For the fourth straight home match, Austin FC came out firing in front of their raucous fans, taking control of the match in the first 20 minutes. This time, though, they were unable to capitalize on any of their early scoring chances, and the first half eventually devolved into a slog for both teams. LAFC thought they had the opener in the 25th minute courtesy of Carlos Vela, but the goal was ruled out upon review for a foul in the buildup.

Fifteen minutes later, the Angelenos got their breakthrough goal to stick. Brad Stuver, Austin FC’s early-season MVP for the spectacular saves he’s made, committed his first costly error of the year with a misplaced pass that fell to the feet of LAFC defender Kim Moon-Hwan just outside the 18 yard box. Stuver saved Kim’s initial effort, but the rebound fell right to José Cifuentes, who passed the ball into the open goal.

After the game, Stuver took responsibility for the goal via Twitter. “That one is on me Austin FC fans, I put us in a hole early,” the goalkeeper wrote.

With the goal, Cifuentes became the first player ever to score multiple goals against Austin FC, having also put one past Stuver in the season opener.

Making matters worse for Wolff and company, midfielder Daniel Pereira had to be subbed off for an abdominal injury in the first half. Austin FC has consistently played worse with the rookie off the pitch this season, and that remained the case following his exit Wednesday night. The extent of the injury was not known immediately following the game.

The second half began with another encouraging spell from the Oaks, but it was short-lived. Austin FC ran out of energy and ideas around the 67th minute, at which point Wolff turned to his severely limited bench for a spark. Neither Rodney Redes nor Manny Perez could provide one.

“The guys that came on, it’s not from a lack of effort. We got into some scenarios and some situations where we could have done better,” Wolff said.

In the dying minutes, just as they did in the season opener, LAFC twisted the knife with a second goal off a counterattack situation to seal the game. Vela split Austin’s center backs with a pass to strike partner Diego Rossi, who finished off the one-on-one chance with a shot to Stuver’s left. “The guys are disappointed in the locker room,” defender Matt Besler said postgame. “We are disappointed with ourselves not to win the game and get points. We are also disappointed for the fans. We feel like we let them down tonight. It’s certainly something that we will improve on and we can’t wait for the next game.”

But wait is exactly what the Oaks will have to do as MLS goes on a two-week break for the CONCACAF Gold Cup international tournament. Austin FC next plays a competitive match Thursday, July 22, against a Seattle Sounders side which Wednesday became the first MLS side in history to start a season undefeated through 13 games.

The Verde won’t be entirely idle during the hiatus, though. They take on Mexican giants Tigres UANL in a midseason exhibition game on Tuesday at Q2 Stadium. Given Austin FC’s injury struggles, you can expect them to proceed with extreme caution in a game where the result is purely symbolic.