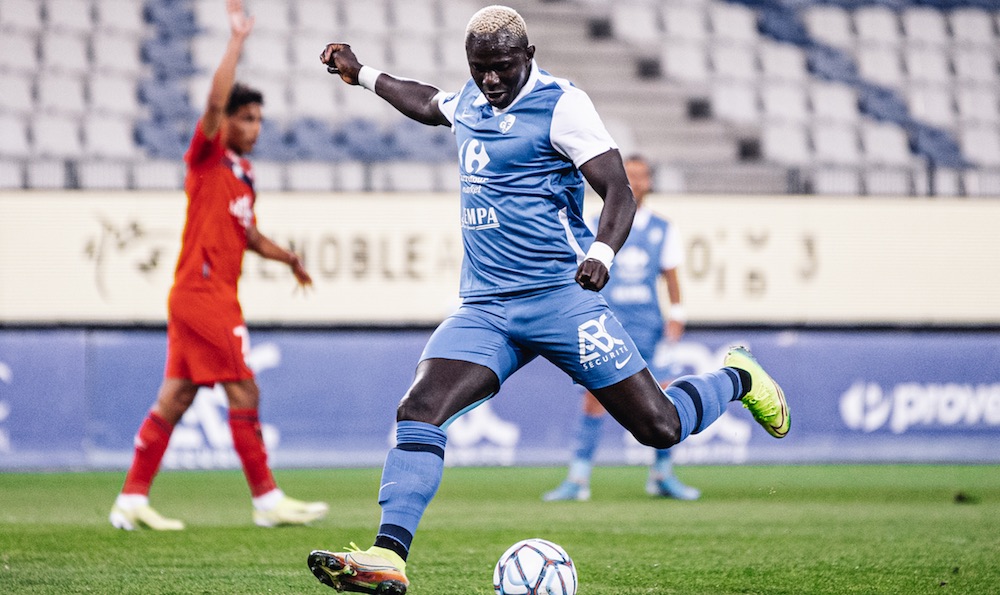 Moussa Djitté comes to Austin from French League 2 side Grenoble, where he flashed an ability to score goals with regularity (courtesy of Grenoble Foot 38)

Austin FC is not just desperate to score goals, it is desperate for a goalscorer. Now, they believe they have their man, and they had to go to the French Alps to find him.

The club announced Wednesday the signing of 21-year-old Senegalese center forward Moussa Djitté from French second division team Grenoble, where he scored 15 goals in 62 games since 2019.

Djitté is signed through 2024, with an option for an additional year after that, and will occupy a U22 Initiative spot on the roster. That initiative, launched this year by Major League Soccer, allows clubs to sign up to three players age 22 or younger to contracts that count significantly less against the salary cap than their total value. Djitté is Austin FC’s third such player, joining fellow young internationals Rodney Redes and Žan Kolmanič.

Striker was a glaringly obvious position of need for the expansion side, which has scored just six goals through 11 games this season, fewest in MLS. The offensive drought has been especially intense lately, with Austin FC having scored no goals in three consecutive games, including the club’s first two home matches. Compounding troubles, Austin FC coach Josh Wolff said Tuesday that Danny Hoesen, the club’s top expansion draft pick and starting striker, will miss the rest of the season following hip surgery (though sporting director Claudio Reyna walked that back slightly Wednesday, saying that there is hope Hoesen can return before the end of the season).

For weeks prior to the Djitté (pronounced jee-TEH) signing, Austin FC has lacked a single healthy player whose primary position is striker. Such is the landscape that awaits the young, French speaking, West African goalscorer at his new club.

“He’s a natural fit in that [striker] position,” Reyna said. "Really good mobility, holds the ball up well, he likes to make runs in different areas. He can score in many different ways. He’s also creative, good on the ball… He’s going to give our team a big lift for sure, and I’m positive that our fans are going to love watching him play.”

Those fans will have to wait a few more weeks to see their new man in action, though. Djitté still needs to obtain a visa and clear immigration procedure, as well as vaccination and quarantining to address COVID-19 risks. Austin FC plays twice over the next week (Thursday against Portland Timbers and Wednesday, July 7, versus LAFC) then has a two-week break before the next MLS match, July 22 against the Seattle Sounders at Q2 Stadium. Reyna said that is likely the earliest match in which Djitté will be available to make his MLS debut, though there is potential for Djitté to appear in Austin FC’s July 13 exhibition match against Mexican club Tigres UANL.

Prior to joining Grenoble, Djitté debuted professionally with Swiss club FC Sion in 2018. He scored three goals in 23 appearances across parts of two seasons after emigrating from his native Senegal. He has also represented his national team at the U20 and U23 levels on six occasions, scoring three times.

“He’s very motivated,” Reyna said. “He had other opportunities and of course a player like him can go to other clubs, but he wanted to come to Austin FC and come to MLS, and that just shows the type of league that we are now, that we’re attracting these type of players.”

Reyna said Austin FC had plans to recruit a young striker even before Hoesen’s injury and before the lack of goals became the biggest story surrounding the club, affirming that the club is not attempting to “throw money at the problem.” Austin FC also still intends to fill its third Designated Player spot on a significant attacking player, perhaps as early as this summer (the transfer window during which MLS clubs can add to their roster officially opens July 7 and closes August 5). Up to three Designated Players can be signed per club to lucrative contracts and do not count against the salary cap. Currently Cecilio Domínguez and Tomás Pochettino hold that designation for El Tree.

In the interim, though, the club must stay the course as constructed. The players currently in Verde will look to break the Q2 curse by scoring the stadium’s first MLS goal Thursday, and in doing so prove they can hang in the fight until the Riders of Rohan come galloping to the rescue.