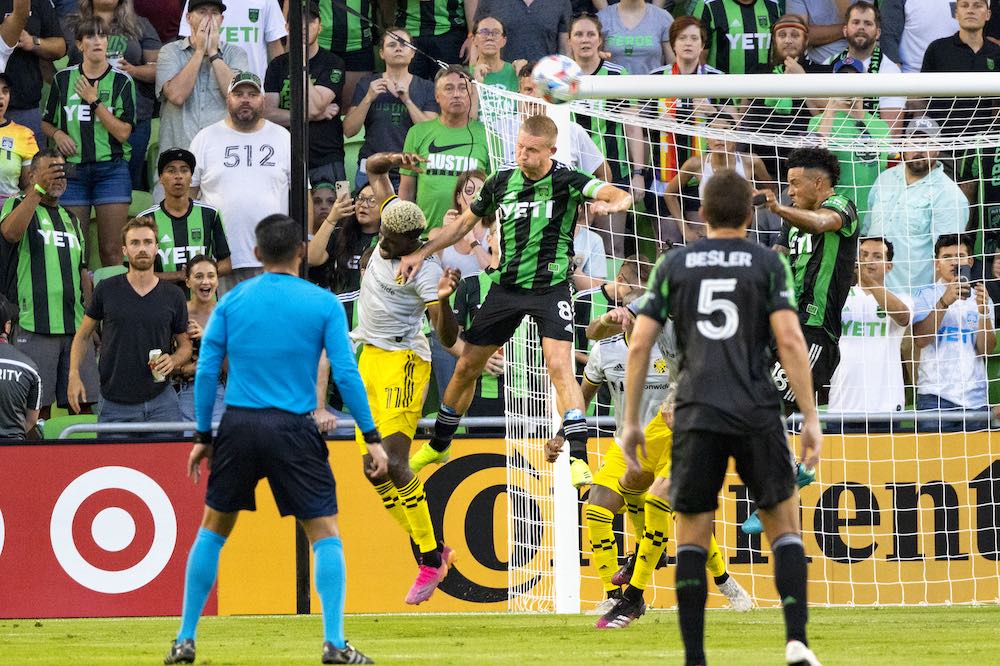 "Our end product is not where it has to be in order to win games," said Austin FC midfielder and team captain Alex Ring (center) at a post-game press conference. Austin FC has scored just six goals through 11 games. See photo gallery. (photo by Jana Birchum)

Just how patient are you, Austin? Your new soccer team seems intent on finding out.

Austin FC’s second home match at Q2 Stadium played out to the same result as the first – a goalless draw in front of 20,738 ravenous fans who have now been made to wait 180 minutes (and counting) for the stadium’s first MLS score. This particular nil-nil affair came against defending league champions Columbus Crew SC in a game the Oaks largely controlled from start to finish.

Austin FC out-possessed the Crew 57% to 43% and took the edge in shots with 17 (five on target) to Columbus’ 15 (six). But, for the sixth time in its last seven matches, Josh Wolff’s club failed to convert any of its scoring chances into goals. “We’re doing way too many positive things in these games to not score goals,” a frustrated Wolff said after the match. “In these games we have to come away with three points. There’s no excuses.”

The positives came early for Wolff’s squad. Cornerstone players Matt Besler and Alex Ring, both absent from Austin FC’s midweek match against Minnesota United due to injury, got themselves healthy enough to start Sunday. Then Austin FC got off to its fastest start of the season, creating the best chance of the match less than 30 seconds after the opening kickoff. A Jared Stroud cross from the right wing found an unmarked Diego Fagundez on the penalty spot, who volleyed his shot just wide of goal. The hosts created a handful of other opportunities in the first half hour but lacked the killer instinct and proper decision making to put one past Columbus keeper Eloy Room. Wolff attributed much of that to players being over-eager to write their names in Q2 Stadium history.

“What I saw last game, and a little bit tonight, is everybody wants to score that first goal,” Wolff said. “And I appreciate it. I think everyone appreciates it, but it’s also now having the calm and the selflessness to [decide], if it’s not the best spot, is there another opportunity that’s open?”

Austin’s defense, led by another six Brad Stuver saves, once again punched above its weight and held talented Columbus attackers Gyasi Zardes, Lucas Zelarayán, and company goalless. A check of the standings shows Austin – with two wins, five losses, and now four draws – above only the Vancouver Whitecaps in the Western Conference. Even still, ATX sits just three points (equivalent to one win) outside of a playoff spot. But in order to win, first, you must score. With just six goals through 11 games, Austin FC has done that less than any team in the league.

"Our end product is not where it has to be in order to win games,” Ring, Austin FC’s captain, said. “I think everyone knows it. It’s been a hurdle for us, I think, the final third, the last decision making, whether it’s taking a shot or playing a cross. It’s something that we’re going to have to figure out if we want to be successful this season.”

Austin FC will look to put an end to its goal drought – and eight-game winless streak – Thursday night in the second of four consecutive matches at Q2 Stadium. The Oaks take on the Portland Timbers at 8:30pm on FS1.