RECAP: A Gen Z-heavy squad stumbles on the road 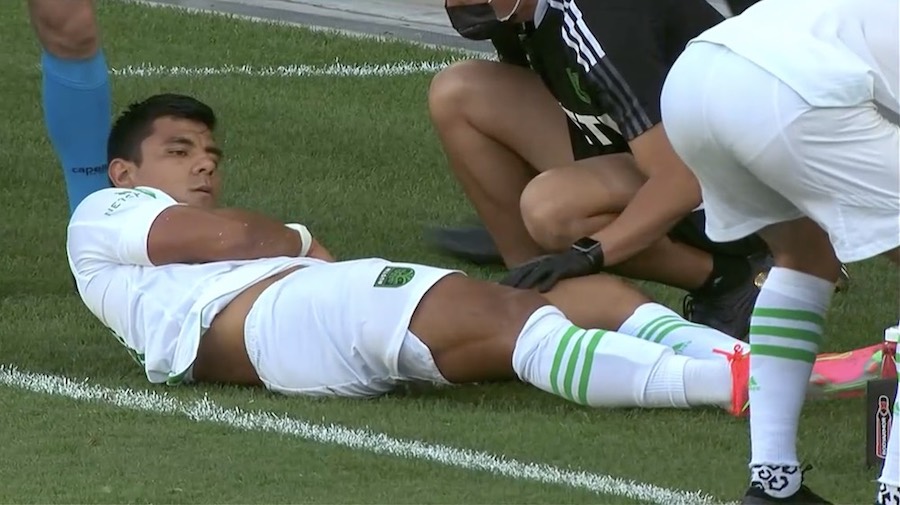 Nick Lima receives treatment for a hamstring injury suffered early in the first half of Austin FC's match against Minnesota United. (courtesy of Austin FC)

Pile the bodies high at Kansas City and Minnesota and pile them high at Nashville and Seattle. Austin FC is losing its troops at an alarming rate.

Even before the Verde started training ahead of Wednesday night’s skirmish against Minnesota United at Allianz Field, the injury report went five deep and included sorely missed starters Danny Hoesen and Daniel Pereira. But by the time the match ticked into its 10th minute, three of Austin FC’s most essential players had joined the ranks of the infirmed.

First, a rough Tuesday training session cost the Verde its two veteran leaders. Matt Besler, Austin’s World Cup starting center back, pulled out of midweek training with a “golfball sized” contusion. In the same session, captain and midfield orchestrator Alex Ring took a hard hit that caused him enough problems in Wednesday’s pregame warmups to be removed late from the starting lineup.

Then, in the ninth minute, an already decimated expansion squad lost arguably its most dependable player, right back Nick Lima, to a “significant hamstring injury,” according to head coach Josh Wolff.

It’s no coincidence that Minnesota scored the opening goal one minute later, and it is certainly no coincidence that the hosts won the match comfortably by a final score of 2-0. There was only one team on the pitch that resembled a competitive Major League Soccer squad, and it was not the boys with the cooler company on their chests. Five of Austin FC’s starters Wednesday were aged 22 or younger. Three of those Gen-Z’ers – Manny Perez, Sebastian Berhalter, and Aedan Stanley – were making their very first MLS starts. With games coming thick and fast in the coming weeks (Austin FC next plays Sunday and then the following Thursday, both, mercifully, at home), Wolff was forced into some desperate decision making.

“We were up against it quick when Alex went out and Nick went out. We were trying to figure out a puzzle and thinking about the next couple of games, but obviously [also] what we can do in this game to stabilize and be competitive,” Wolff said. “It was a difficult exercise without a doubt.”

With so many key players unavailable, it fell to the ones that were – namely, Austin’s high-priced internationals Cecilio Dominguez, Tomás Pochettino, and Rodney Redes – to give Austin any chance against the Loons. Other than a Pochettino chance in the first half that drew a good save from Minnesota keeper Tyler Miller, that trio failed to manufacture much in the way of offense to get the Oaks back in the match.

Pochettino’s former teammate at Club Atlético Talleres in Argentina, Franco Fragapane, flashed the kind of quality in scoring the game’s first goal that Pochettino has yet to produce for Austin. Fragapane volleyed a bouncing ball into the roof of the goal past Brad Stuver, who made only one save on three opportunities, a far cry from the remarkable 17 saves on 18 chances he had delivered in the Verde’s prior two games. Minnesota got its second goal on a corner kick headed home by Adrien Hunou.

“We feel so bad. We came with a mentality to win this game but unfortunately we give away those three points,” defender Julio Cascante said. “The beautiful thing about this game, we played today and right away we have to change our mentality to play the next game in four days … because we’re going to play at home and I think we have to show our fans what they have been expecting from us. I think they want us to show them how difficult a team we can be at home.”

An emotional atmosphere is expected for Sunday’s match when 2020 MLS Cup champions Columbus Crew come to Austin to play in the city to which they were nearly relocated. It’s scheduled for a 7:25pm kickoff on FS1. Wolff will again have to take a stab at solving the puzzle with the troops he currently has at his disposal. Reinforcements are still a ways away.

“We’ve been looking for players, [but if] you make a big commitment now based on just right now it can be a little hasty,” Wolff said of the imminent July transfer window, when MLS teams can look to add talent to their rosters. “We need a striker. We’ve been looking and we’re certainly zeroing in on a couple guys, but it’s difficult.”