You always remember the first one who breaks your heart.

Austin FC won’t forget Ilie Sánchez and Gadi Kinda anytime soon. Both Sporting Kansas City midfielders scored late in the second half to turn a 1-0 Austin FC lead into a stinging 2-1 defeat in a nationally televised contest at Children’s Mercy Park in Kansas. 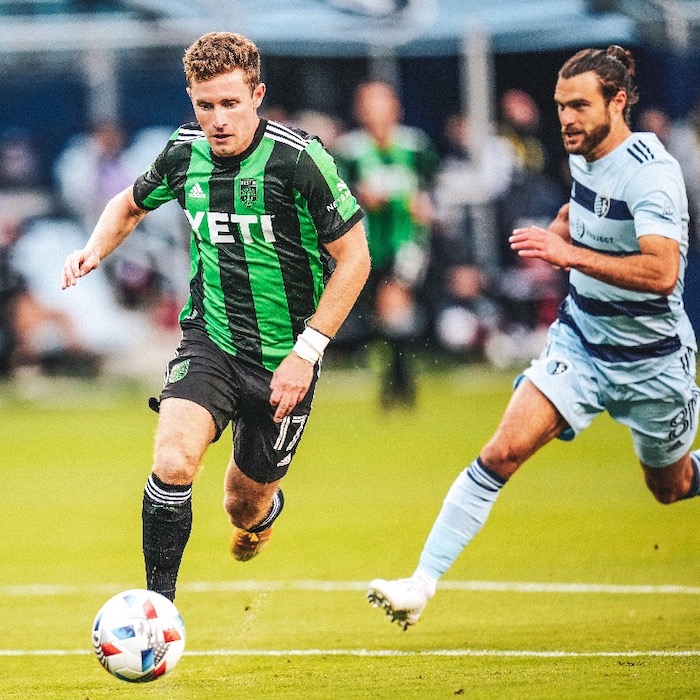 The match was a Christopher Nolan flick on grass chock-full of thrilling action, tense stretches, and even a betrayal of sorts as Austin FC captain Alex Ring got reckless and earned the first red card in club history. Ring was sent off in the 67th minute with a second yellow card after coming through the back of Sánchez, who was playing a pass back to his goalkeeper from the halfway line. The foolish foul was the final straw for referee Ted Unkel, who warned Ring on more than one occasion in the second half that another bad challenge would do it for the Finn.

“The red card changes everything,” head coach Josh Wolff said post-game. "It changes the whole dynamic of the game."

Austin had been in the process of regaining control of the match, control that it gained early and in sudden fashion in the seventh minute. For the third game in a row, ATX got its first goal off a tremendous cross from right winger Jared Stroud, who artfully curled one around two Kansas City defenders to find the feet of a charging Jon Gallagher at the top of the 18-yard box. Gallagher took one touch to his left, then tucked his left-footed shot inside the near post past keeper John Pulskamp to give the lead to “the Oaks” (FOX’s Rob Stone used that nickname twice during the broadcast, so we’re going with it).

But Kansas City gradually began locating pockets of space in Austin’s defense as the first half progressed, particularly down the right flank where Nick Lima and Jhohan Romaña struggled to contain the duo of Gianluca Busio and Daniel Sallói. The hosts created several scoring opportunities but were unable to convert and went into the halftime break down a goal but ahead in shots taken.

“We weren’t able to adapt fast enough,” Lima said. “Luckily they didn’t have a goal in the first half off of one of their opportunities.”

Austin’s midfield struggled to dictate the pace of play in the first half as it had in the two prior victories, but settled into a period of strong play to start the second period which resulted in scoring chances for Stroud and Cecilio Domíngez. The momentum stopped dead in its tracks when Ring saw red. Forced to play the remaining 20-plus minutes of the match with 10 men, Wolff brought on every defensive-minded substitute he could find on his bench and switched to a five-man defense in an attempt to escape with the win.

The plan nearly worked. Not because Austin’s defense was impregnable, but because Kansas City’s attackers looked as though they were incapable of capitalizing on their chances. Brad Stuver kept Austin in the game with six saves, of which three or four were outstanding. The breakthrough finally came on a corner kick in the 82nd minute when Johnny Russell found the forehead of Sánchez, who converted from five yards out.

Austin continued its compact defending to try to salvage a draw, but a Kansas City throw-in at the start of stoppage time found its way to Austin-native Khiry Shelton, who flicked it across to Kinda for the go-ahead goal.

The loss dropped Austin into a tie for seventh in the Western Conference through four games. They will be without their captain for their next match as Ring must serve a one-game suspension for the red card. He’ll be sorely missed for a difficult matchup against Chicharito and the LA Galaxy in Carson, Calif., Saturday (5/15) at 2:30pm. The road only gets tougher for the Oaks after that, with two more matches against strong opposition in the form of the Nashville SC and Seattle Sounders before returning to Kansas City for a rematch against SKC on June 12. Austin FC will collect the pieces of its broken heart in the meantime. 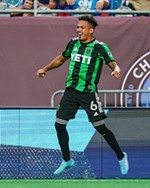