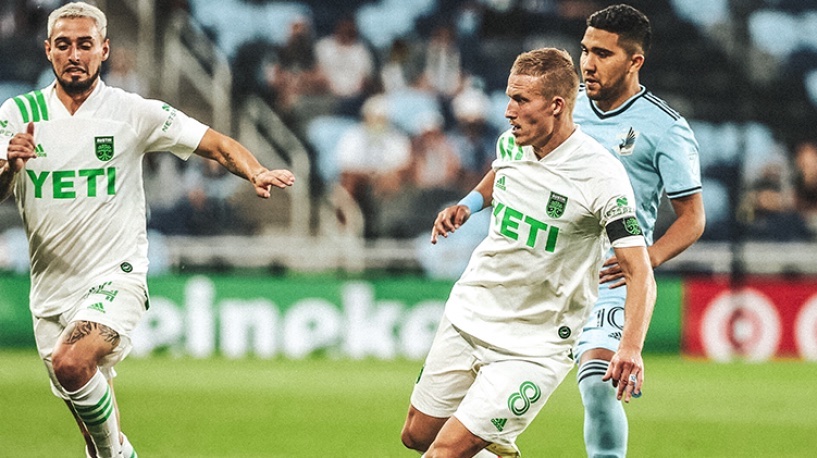 Austin FC captured its second road victory in as many weeks Saturday with a physical, at times downright ugly, 1-0 victory over Minnesota United in the Twin Cities.

The winner, which came early in the 17th minute, triggered a flash of déjà vu from the club’s first-ever goal a week ago, as Diego Fagundez once again tucked away a Jared Stroud cross inside the far post with his right foot. It was the only goal Austin FC would need as the club crossed another first off its fastly-shrinking list: first clean sheet (fútbol parlance for keeping a goose egg on the opponent’s goal tally).

“Proud to get the win, really happy to get the zero,” head coach Josh Wolff said after the match. “On the road, anytime you can grab three points is great, but to pitch a shutout in Minnesota is not easily done.”

Austin took the fight to Minnesota United, a squad that had disappointed in its opening two games after reaching the MLS Cup semifinals last season, from the onset. The Verde held possession for nearly two-thirds of the opening half and should have gone into the break up 2-0 when another deadly cross from Stroud found a wide open Danny Hoesen six yards in front of Minnesota’s goal. It was the kind of chance you pray falls to the feet of your striker, but Austin’s No. 9 skied the ball over the crossbar.

On the other end, ATXFC dodged the Loons’ two best chances of the half, the first of which was self-inflicted. In the 10th minute, a Minnesota pass deflected high into the St. Paul sky above Austin goalkeeper Brad Stuver. When it returned to Earth, Stuver weakly punched the ball into the path of MNUFC midfielder Ethan Finlay 12 yards in front of goal, but Finlay’s shot sailed high. Later in the half, after Austin had taken the lead, Loons No. 10 Emanuel Reynoso received a pass in-stride in front of goal and attempted a curling, left-footed finish, but the shot clattered off the post. Replay showed that Austin defender Matt Besler’s diving challenge caught the ball just enough to force it onto the woodwork.

In the second half, Wolff turned to his bench to extend the lead and kill the game off. Forward Cecilio Domínguez was the first to depart after taking multiple hard fouls from the home side, who at times appeared more interested in putting a lick on the Paraguayan designated player than in finding an equalizing goal. As he has done in all three games so far as a substitute, forward Jon Gallagher injected life into the Austin attack, but the Verde was unable to put away several late chances. “We could have executed a little bit better to kill the game off and get some more goals,” Wolff said.

Stuver was called upon to make one key save in the 83rd minute and did so, parrying away a booming Patrick Weah header. Minnesota mustered a last-gasp bit of pressure in stoppage time but Austin, led by captain and man of the match Alex Ring, hunkered down defensively until the final whistle. Six points in three games, all on the road, for an expansion team is a start few outside the club would have predicted. "It builds confidence [and] shows that we're doing things right, picking up results and doing it mostly in the style we want to do it,” Ring said.

While the 2021 MLS season is not even 10 percent over, the sight of a green and black crest with a cartoon oak tree sitting fourth in the Western Conference in the early stages is reason enough for the Austin FC supporters to break out the fireworks in celebration. Their club has proven it can win – win with goals, win with defense, and win with regularity.

More of the same awaits next week as the Verde heads to Kansas City to take on Sporting KC, another 2020 playoff team stumbling slightly out of the gate. That match kicks off Sunday, May 9, at 6:30pm on the CW Austin and the Austin FC app.