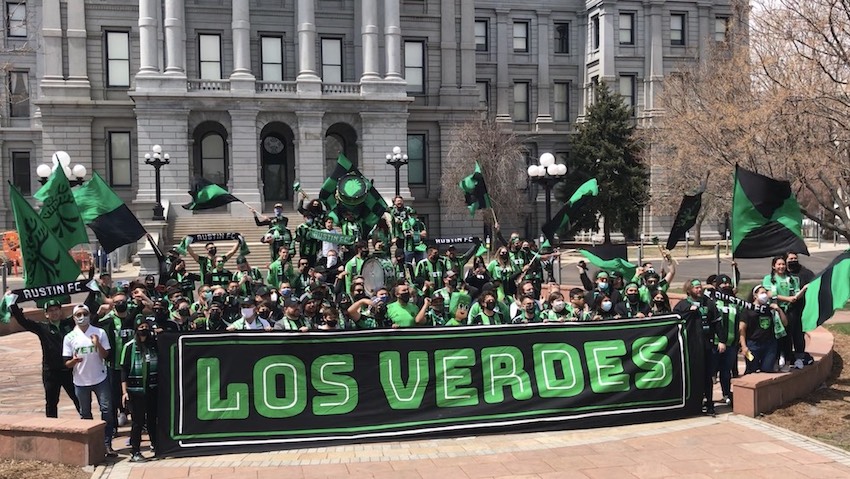 The traveling crowd of Los Verdes supporters began the day with a group photo on the steps of the Colorado State Capitol. (photo by Eric Goodman)

One day, perhaps as early as June 19, a singing mob of Los Verdes members will get to march from the Texas Capitol down Congress Ave., into the waiting arms of some local bar, to celebrate the start of another Austin FC game day.

But why wait seven weeks when you can just do the exact same thing 900 miles up north?

Local Coloradans and visiting out-of-towners enjoying a bluebird Saturday sky stared with confused amusement while 100-plus Verde-clad Austinites paraded down Denver’s 16th Street Mall six hours before the hometown Colorado Rapids played host to Austin FC’s second ever match. The invaders came armed to the teeth with trumpets, drums, flags, and banners. They were not quiet.

But as mobs go, this was not the angry kind, but the infectiously joyful kind. Denver couldn’t help but collectively smile and clap along as La Murga, Austin FC’s fan-led marching band, performed a sampling of its greatest hits, including “Vamos ATX,” “Austin efe ce,” and “Olé Olé Austin FC.” For several onlookers, it was a genuinely moving sight.

“I felt union, I felt organization, I felt teamwork. I felt people that felt a certain way about something they love,” Denver visitor Antonio Brown said. “The fact that they’re united, that means a lot because the way the world is right now, we’re not together.”

Brown’s travel companion, Ray, saw enough to claim a seat on the bandwagon. “I don’t even know that team. I might buy a jersey just because of that.”

The mile-and-a-half march from the Colorado Capitol to The Celtic on Market Irish Pub was an emotional release for the Los Verdes die-hards, the majority of whom had “DenVERDE Weekend” circled as their first chance to see the club they’ve supported for 27 months play a game that counts in the flesh.

“It feels amazing,” Los Verdes board member Katie Ensign said mid-march. “We’ve been planning this for a long time and it’s a lot to ask to tell people to buy plane tickets when they don’t even have game tickets yet. To show up here in these numbers and be ready to cheer all day and walk for miles, it’s just the passion that so many people have. Even though I knew that, just to see it in person for the first time is incredible.”

Austin FC takes on the Colorado Rapids tonight, 8pm, in Commerce City, Colo. The match airs locally on the CW Austin and Unimás, and livestreams at austinfc.com and the Austin FC app.