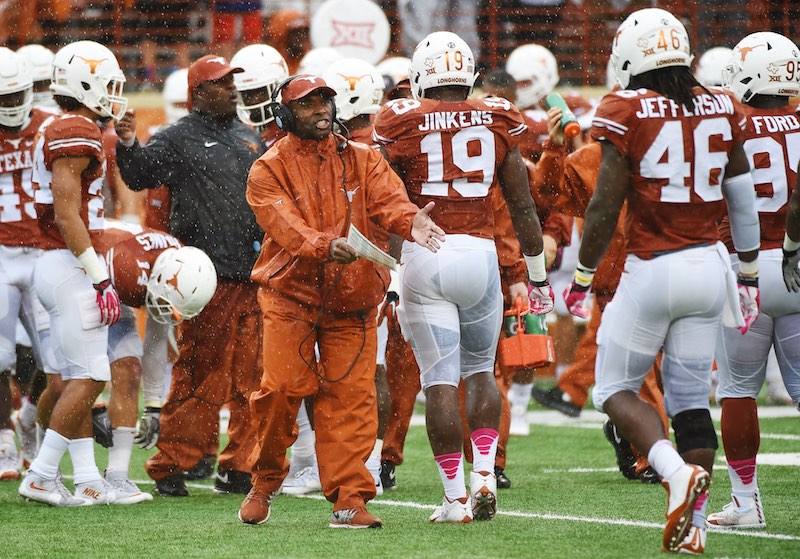 The win puts the program on track for a potential bowl berth – a stark contrast from the naysaying and gratuitous dumping set forth and culminating at the industrial-grade starching at the hands of TCU.

Of course, after the big win versus Oklahoma, confidence was at a season high in the torrential downpour at DKR last Saturday. The conversion, on both sides of the ball, into a purely downhill, smash mouth team looks promising. The aggressive Longhorn defense held Kansas State to 242 total yards, while the offense mauled the Wildcats with 274 rushing yards.

More slippery than a personal injury lawyer in an oil field, Jerrod Heard played an efficient game, accounting for a combined 172 yards of total offense. Johnathan Gray ran for 106 yards – his first 100-yard game of the season. The “18 Wheeler” Tyrone Swoopes was used as a blunt force object, pounding the Wildcats for three rushing touchdowns.

The offense seems to be making the best of its diverse skill, deploying Heard, Gray, Swoopes, and the electrifying Daje Johnson more as weapons. Forgoing dependence on any one player, they’re utilizing a “touches” system which keeps defenses on their heels, even when they know runs are coming.

Next on the docket is a dangerous road matchup with Iowa State (2-5, 1-3 Big 12), looking for a spark to save their season. The Cyclones have made a switch at quarterback, benching senior Sam Richardson for sophomore Joel Lanning. They also fired offensive coordinator Mark Mangino.

Lanning, a dual threat, presents something of a challenge for Texas. Playing well in his replacement of Richardson versus the second-ranked Baylor Bears, he’s surely confident and looking to secure his new starting assignment.

The problem for Iowa State is that they are giving up yards and points at an astronomical rate. Right now, they’d give up two touchdowns to the Golden Girls on Segways. Seneca Wallace is rolling over in his grave.

The big news in college football, aside from Baylor QB Seth Russell’s season-ending neck injury, is the firing of Al Golden as head coach of former powerhouse Miami Hurricanes. A move probably a year overdue, Golden was actually fighting an uphill battle from the time he took the job.

For whatever reason, Charlie Strong was short-listed – by the media, mind you – as a potential candidate to replace Golden. Given his ties to the talent-rich state of Florida, there is some sense in making the connection. But there seems to be something else in play here.

For one, why would Charlie Strong, who’s holding one of the top three to five college football jobs in the country, even consider Miami? The list of negatives vastly outweighs the positives. Texas’ facilities, while behind those of Ohio State or Alabama, aren’t as degraded as Miami’s are rumored to be. There’s been no mention of upgrading the current Hurricane facilities, or springing for a much-needed new stadium.

There’s a residual stink to the program, which has been ravaged by multiple NCAA punishments. Seeing as the university’s making a passive-aggressive but concerted effort to deemphasize football, a large portion their deep talent pool – even in the area – seems uninterested in staying in the area.

Truthfully, part of Miami’s recruiting strategy was their ability to recruit outside of Florida. For example, all of the school’s top quarterback talent over the years – Gino Torretta, Vinny Testaverde, Ken Dorsey, Jim Kelly, Bernie Kosar, and (current Miami starter) Brad Kaaya – were all from other regions of the country.

There also seems to be more coding in the suggestion that Strong be considered for Miami, a serious downgrade at this point. As in, Strong “has connections” there. He can reach “those kids” in South Florida. Would Strong really want to try to revive a dying program with an unmotivated school president, when he could recruit those same Floridians to Austin, just as he did to Louisville, Kentucky?

Even winning isn’t enough for Strong.

• Horns wanna get physical, physical: The decision to give punishment, instead of receiving it, has paid off. In their matchups against Oklahoma State and TCU, the Horns gave up a -396 yard difference. In the last two games (Oklahoma and Kansas State), they have outgained the competition, with +221 yards.

• Something to watch for versus Iowa State: diversity in packaging for Texas. While the run game has been dominant, the Longhorns still need to show themselves as a legit threat to pass, in order to prevent defenses from peeling their ears back. Heard and Swoopes must continue to improve, and Jay Norvell will need to get creative in freeing receivers to keep safeties occupied.