New Brunswick and football. Hoboken and baseball. Rugby and, well, rugby. There aren't many towns that can lay claim to inventing an entire sport. But as the Texas Rollergirls bout tonight, the Bullock Texas State History Museum celebrates Roller Derby, the high-contact, high-speed sport that the 512 gave the world. 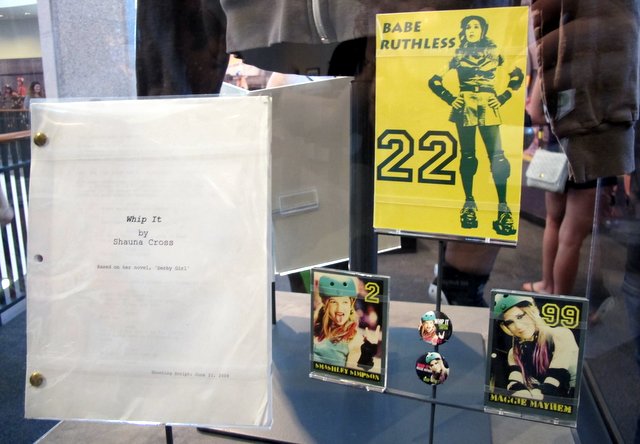 The original script and trading cards for Whip It, the Austin-set Roller Derby movie starring Ellen Page and Drew Barrymore: part of the history of Roller Derby exhibit at the Bob Bullock (Photo by Richard Whittaker)

There's a reason why, in Roller Derby circles, the Austin players have been called the mothers of all. It was Austin that birthed the sport in 2001, that wrote the rules, that blazed the trails, that set the agenda for the fastest growing women's sport in the world. Every league, every junior league, every one of the growing number of men's leagues, owes a a debt to the pioneers of the flat track Texas Rollergirls and the banked track TXRD.

The new exhibit at the Bullock explores and celebrates that history, with items and artifacts that help chronicle the local history of the sport. For long time fans, players, officials, and etirees of the sport, it's an opportunity to see memorabilia and boutfits, even faces (courtesy of the photographers who have donated their time over years, miles, and hundreds of bouts) that they haven't seen in years. However, it also pays tribute to the history of old school derby, the marathon endurance races of the 1930s, and the figure eight-track craziness of the 1980s 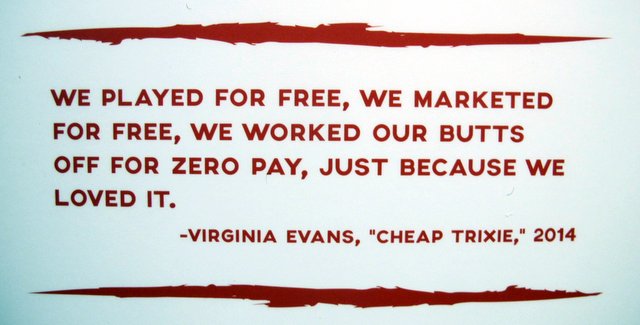 Blood, sweat and tears: the legacy and foundation of Roller Derby in Austin, captured at the Bob Bullock (Photo by Richard Whittaker)

If you don't know derby, the exhibit is a perfect primer on the rules. And that makes tonight a perfect opportunity to see the sport in action, as the Texas Rollergirls' all-star travel teams, the Texecutioners and the Bomb Squad, play hard-blocking hosts to Florida's Tampa Tantrum and the Bruise Crew. The Tantrum may be feeling tough as they roll into town on the crest of a 420-67 defeat of Houston's HRD Knockouts. But they better not get too cocky: As has been said before, you come at the queens, you better not miss, and the Austin annihilators will be skating in their throne room. Yes, tonight's bout is the last of the season at the Blood Shed, the league's South Austin facility, before they move back to the Austin Convention Center for the three final dates of the home season (May 16, July 26, Aug. 22)

And if you can't make it to the Bob Bullock before the bout, Sunday may be even better. On April 12, the athletes of Skates on Skates are expected to be in Austin. The group are currently skating all the way from Cocoa Beach, Florida, to Santa Monica, California, to raise fund and awareness for anti-domestic and sexual violence charity the Joyful Heart Foundation. The skaters are expected to be in Austin some time between 1pm and 3pm, and will be visiting the exhibit then.

And if you miss all that, or you just feel like a big scoop of the other flavor of local derby, then TXRD are breaking out the banked track next weekend. April 18, the Hellcats try to scratch their way to victory over the Rhinestone Cowboys.

Whatever your choice, it's all part of something truly historic about Austin.

Roller Derby at the Bullock Texas State History Museum, 1800 Congress. The exhibit runs through Aug. 9. Admission free with entrance to the museum. www.thestoryoftexas.com.

Read more about the history of Roller Derby in our 2009 cover story, "Electric Skaterland"