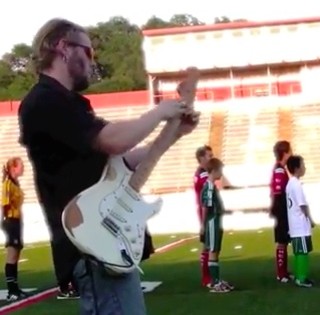 The Austin Aztex host Vancouver Whitecaps FC 2 tonight, April 1 – the lone mid-week date on the 14-game home schedule. The WFC2 are in their first year of existence, and they’re a young team, with just two starters over the age of 22. They’re coming off a season-opening 4-0 shellacking by the Seattle Sounders 2 in the first Cascadia Cup matchup at the USL level.

It’s an 8pm kickoff, but you want to get there in time for the U.S. and Canadian national anthems performed on electric guitar by Andy Macintyre. I’ve seen him do the Star Spangled Banner for the Aztex before, and it’s pretty cool – not Hendrix, but all his own, with some crazy tremolo stuff way up the neck of the guitar. He’s done O Canada at House Park, too, in 2013 when two Canadian clubs were here for the PDL playoffs. That’s a harder job, I think: it's one of my favorite anthems in the world, but it’s so stately and almost operatic, it doesn’t lend itself to improvisation the way the raucous, unconventional Francis Scott Key composition does. Judge for yourself: Macintyre will be playing them both at 8pm. Or there’s this: