Aztex to Bring Pro Soccer Back to Austin 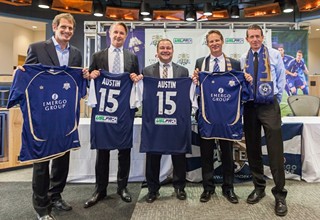 The Austin Aztex announced today that they’ll be Austin’s newest pro sports team as of next season. They’ve signed a franchise agreement to join USL Pro, the same league the old Austin Aztex were in before they moved to Florida and became Orlando FC. And they also added two key players to the ownership team.

The Aztex are currently defending champions of the USL Premier Development League, the top amateur league in the country, but it’s a big step up to the pro ranks. USL Pro is that next step up the American “soccer pyramid,” and the top level of the United Soccer Leagues. USL Pro has also been the leading incubator for the recent era of Major League Soccer expansion: When Orlando moves up to MLS next year, they’ll be the fifth USL Pro team to do so since 2009, following Seattle, Portland, Vancouver, and Montreal.

So, what will be different about the Aztex next year?

The players will be professional rather than amateur. That means a higher level of play, but also a sense of continuity as players are here for a longer haul, and have more reason to be back from year to year. Honestly, a lot of the guys who’ve been on the field for the Aztex in their three seasons have been pro level players – but the opposition hasn’t always measured up to that level, and it hasn’t been easy to build star power out of players who are only here for what is essentially their summer break. Markley also noted that the Aztex will likely form an affiliation with an MLS team before the next season starts, which would among other things bring four players from the "parent" club to the Aztex roster. Holt elaborated that his league anticipates that by next season, every MLS team will have a USL Pro partnership.

The team will play a full schedule. USL Pro is playing a 28-game regular-season schedule this season, running from March to September, compared to the PDL’s 14 games in May, June, and July. That’s huge. No word yet on what next year’s schedule might look like, but it’s worth noting that the Aztex will be one of at least four expansion teams in 2015, bringing the league to some 22-24 teams, according to USL President Holt.

Among the things that didn’t happen today:

There’s no stadium development. The Aztex have a lease option for House Park for 2015, but are leaving open the option to move somewhere else if the situation warrants it. House is charming, in its primitive way, and the location at 13th & Lamar can’t be beat, but the 6,000 capacity could be a limitation, especially if the team brings in any big-name exhibition opponents. And the lack of beer sales at the AISD facility is definitely a liability, both for revenue, and for fan experience. But for the short term, at least, there are few attractive alternatives among existing facilities. As for the longer-term dream of a soccer specific stadium, the addition of Epstein and Thornton would seem to tilt the field toward COTA, but CEO Markley stressed that “we will be looking at all available options” for both interim and long-term solutions.

There’s no direct move toward Major League Soccer. This one’s totally tied up in the stadium question; it’s hard to see either one happening without the other. And between the MLS’ avowed insistence on “downtown” stadiums, and the City of Austin’s history of whiffing on infrastructure projects such this (hence the Round Rock Express and the “Cedar Park” Toros and Stars), the way forward still looks murky. Then again, that’s exactly the picture this talented and dedicated group will be looking to clear up.

There was no mention of the coaching staff. The Aztex are certainly happy with Manuel Buentello at this point and this level – he took over from the very popular Paul Dalglish, and has guided the defending national champions to a 5-0-1 record thus far, best in the 64-team PDL – but is he the right guy for the next level? Signs point to yes, says my Magic 8-Ball, but there will plenty of time to look at that in the off-season.

Meanwhile, it’s back to the grindstone for Buentello and his team – they face likely their toughest test of the season so far when they host the Laredo Heat, a perennial power in PDL, on Saturday at House Park. Kickoff is at 7:30pm, which should give you just enough time to make it there from wherever you’re watching the 5pm England-Italy World Cup game.