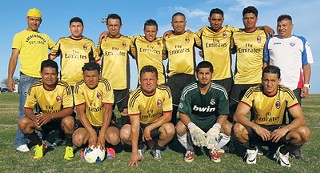 No, this isn’t an extremely belated April Fools joke, but neither are Robinho and Mario Balotelli coming to town. The Austin Aztex announced today that they’ve added to their preseason schedule a game with local club AC Milan of the Liga Lempira.

That'll be the Aztex' third preseason game; they play Incarnate Word this Friday, April 11, at 6:30pm at Ray Thomas Fields in Georgetown, after opening their preseason last Friday by beating Southwestern University, 2-0. With just 16 players on the current roster, and only a few of those available until college ends next month, the Aztex have a lot of prospects trying to make an impression on new coach Mario Buentello in these games.

The PDL title defense begins at House Park on Saturday, May 10 against the Houston Dutch Lions.