What Can We Glean from Charlie Strong's Thrilling Press Conference? 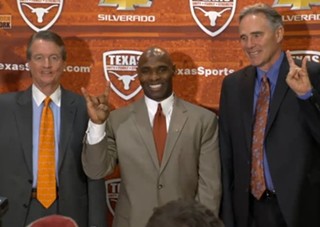 Opening between Powers and Patterson, the eternally youthful Strong – dude’s 53! – wore a khaki colored suit, white shirt, and unsurprisingly burnt orange necktie for his first sitdown in front of a geeked out media core that cannot wait to ask the new guy in town the same old questions each week. After a brief introduction, most of which came from Powers, who was seated far right, Strong took over and began preaching nervously about all the ways he plans to “Make sure our Texas Exes are so happy with the product that we’ve put on the field.”

Now, introductory press conferences historically run about as informative as a drunk hobo’s Sunday morning lecture on Sixth Street, but Strong just got here. He’s 0-0 with no recruits and no transgressions and not a single coaching change around his staff to his name. We have no idea if he intends to run with David Ash next year or throw Tyrone Swoopes into the mix – or hell, if he’s going to try to talk Louisville quarterback and likely NFL draft winner Teddy Bridgwater into forgoing his early exit strategy and swinging down to Austin for a senior year spent in the orange and white.

The point is that the man’s a massive mystery, a local concept in more ways than he’s a realization, so introductory press conferences remain the only source of substance of which we can break down today.

Thanks, in many ways, to the canned questions the roomful of reporters asked him – shouts to the guy who asked if there’s “a sense of pressure that comes with taking a job like this,” though we’d be remiss if we didn’t make mention of the other dude who, ever so specifically, asked “What goes through your mind when you hear the word soft?” – Strong’s opening statement and subsequent responses ranged from the tragically bland to the… slightly less tragically bland than that.

He spoke of “leaving the program better than it is the day you got it” like it’s a goddam campground or something, and reiterated at least twice that the main objective of a college football player at the University of Texas is to get a college degree. In 2012, Mack Brown graduated 71 percent of his seniors, which, for what it’s worth, is pretty good – and fifteen points higher than Case McCoy’s completion percentage over the 2013 season.

Still, “we’re about the education” ain’t the truth on Forty Acres. If it was, Powers and Patterson would probably trot Robert M. Armstrong Centennial Professor and occasional Chronicle contributor Tom Palaima out as coach. No, Texas football remains about winning – “championships,” Strong stressed – and the bricks for another run at a title are there. As Strong said, “I just need to put another brick on top.”

Elsewhere, the conference hinted at mildly interesting on two occasions: once when a reporter asked about his affinity for turtlenecks (“It’s very thin,” he said of his trademark gameday garb. “It’s one of those Dri-FITS. It keeps me cool.” Oh, doctor.) and again in response to another question in which he was asked about his stance on compensating student-athletes.

Strong had supported the notion in the past, saying in August: “We coaches make too much. We need to do something for players.” He responded more conservatively on Monday, saying only that his players are on scholarship, and that, since they’ve been given the opportunity to play football for Texas, “If we develop them the right way, their payday will be in the end, because they’ll be ready to go on to the next level.”

That’s a hairy situation, no doubt, but a notable one to change your tune on. Without doing any research on the matter, I’m willing to assume that UT’s brass and Board of Regents has a bit more of an influence over its football coach than those who hold the same positions at the University of Louisville, a program that’s never won more than a second-tier conference title and only twice competed in a BCS bowl game.

Is it possible Strong’s sentiments – important, surely, and potentially essential moving forward – were thrown under the muzzle by UT brass? Who knows. But at 0-0 and with a mountain to climb before the school chief squad’s truly back in the national limelight, Strong’s best served to keep his mouth mum on such subjects for a while.