Now for Something Uplifting

There is a dormant, dream-like energy that's roused when you're lifted by a balloon. The elements that build the phantom feeling are not difficult to imagine: Hot-air balloons have a romantic obsolescence akin to row boats and carriage rides, and the act itself is central to creating altered realities in movies such as Up and The Red Balloon. With a mellow ride distant from the noisy aggravation airlines have branded on our idea of aviation, a hot-air balloon ride offers that rare thing – a relaxing approach to flight.

“I've always been fascinated by things that float in the air,” says David Smuck, founder of the local ballooning company Austin Aeronauts. “I'll watch a kid's balloon as it gets loose and goes. I'll watch it till I can't see it anymore.”

Smuck started flying planes in Port Townsend, Wash., in order to commute to Seattle after a large storm damaged the floating bridge between the two cities; he's never been on the ground for too long since. After returning to Texas in the early Eighties, another pilot introduced him to the world of hot-air balloons. The hobby took such a hold that Smuck began his own company to share ballooning with others, fashioning the experience for companies, marriages, and troves of curious individuals for more than 30 years.

Ballooning is also a decidedly international avocation, which has allowed Smuck to forge connections that have led to him flying in the Netherlands, over Patagonia, and as part of a 60-balloon convoy that took part in the opening and closing ceremonies at the 1988 Calgary Olympics. After selling his construction business, Austin Aeronauts became his sole professional focus. “This is as close to retirement as I'll get,” says the 63-year-old Smuck. A balloon's flight is dependent on the surrounding climate and topography, and the window for available departure times varies around the world. In Round Rock and San Marcos ,where Smuck's flights customarily begin, he prefers to take off close to 8 in the morning before the sun's heat begins to stir the sweeping central Texas winds. Ballooning's close relationship to weather patterns, however, can make planning an exact flight time tricky. Smuck decides whether or not it's safe to fly around 5am the day of the flight, after which he calls the passengers to inform them if they're going up that morning. Even if it takes weeks of rescheduling, the $250/person ticket to ride the balloon stays good until a time to take flight can be arranged.

Going airborne with Smuck today is a young couple flying in commemoration of a birthday. They hold the mouth of the flat horizontal balloon open for a large fan that puffs its blue, red, and yellow envelope about two-thirds full. Smuck follows cold inflation with a series of fire bursts from the twin 9,000 horsepower burners that lift the rip-stop nylon balloon skyward and pulls the chest-high wicker basket upright. He estimates today's trip to be somewhere around the 4,500th time he's taken flight in a balloon (without a serious accident to date, he notes) and sends a final blast into the envelope that lifts the entire apparatus off the ground.

The slow ascent dramatically reveals Texas' impressive flatness, eventually allowing for single-point sight lines to Rockdale, Georgetown, Lake Travis, and downtown Austin from roughly 1,500 feet in the air. Cows, horses, dogs, and goats alarmed by the fiery bellows stare at the balloon as it floats at a leisurely 5 mph pace across the sky. Aside from Smuck giving a couple radio-calls to the Georgetown airport and a few notes on how to brace for landing, everyone aboard silently watches the rising sun light up the countryside. After getting over the height, the lack of any cords or safety belts keeping you in the basket, and the troubling invisibility of power lines (a balloonist's greatest nemesis), the feature that emerges the most fantastical is the windless hush created when flying at the speed of the surrounding atmosphere. As the balloon slowly spins to allow for a panoramic view, every gaze, honk, and waved arm below serve as reminders that you're standing hidden at the center of the morning's featured attraction. 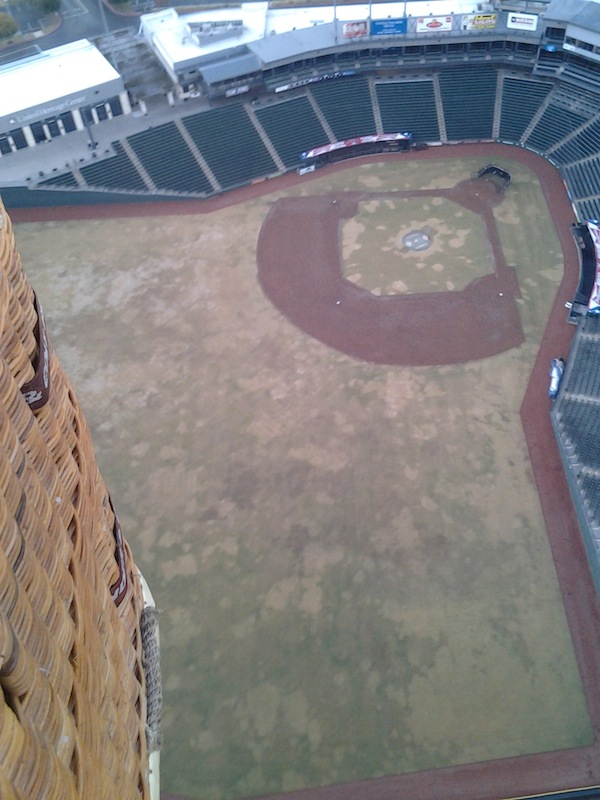 Below the flight is Chuck Berry, a one-man chase crew driving in zig zags along highways and side roads in the general path of the balloon. A hot-air balloon trip can never have an exact pre-determined destination, and it's Berry's responsibility not only to greet the travelers when they land, but also to work as a liaison between the balloon's return to earth and any property owners who might take issue with the impromptu visit. The rare instances that find the end of a trip met with an unhappy host is almost always cured with the presentation of champagne, which is why a bottle of bubbly is a part of any hot-air balloonist's arsenal.

The flight finally settles in an appropriate grassy field next to a group of bewildered two-year-old bulls at the Gattis Cattle Company in Georgetown. Berry talks with the amiable owners, who turn out to be repeat hosts for Austin Aeronauts, and rolls up in the white pickup truck just as Smuck pulls the deflating balloon to the ground. 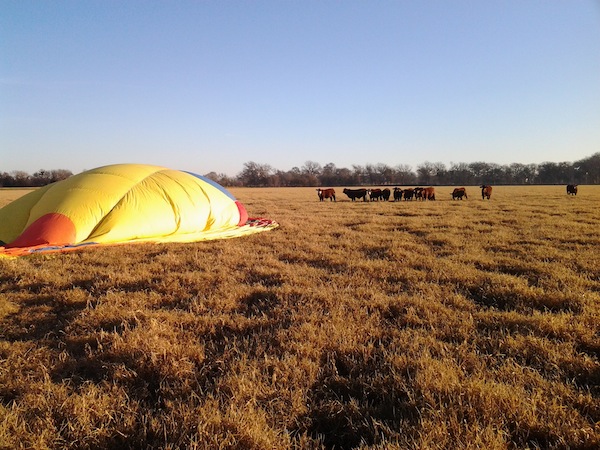 All the balloon's riders pack into the chase truck and get a street-level view of all the houses, fields and livestock they recently passed above on their way back to the original point of departure. Smuck presents each new passenger with a “Certificate of Ascension” and ends each trip with a buoyant breakfast of champagne and croissants. Before the meal can be shared however, everyone raises a glass as Smuck's sensuous voice recites the age-old balloonist's prayer:

“The winds have welcomed you with softness, the sun has blessed you with warm hands, you have flown so high and so well that God has joined you in laughter and set you gently back into the loving arms of Mother Earth.”

With a sprinkle of champagne atop all the travelers' heads, the morning's adventure comes to an end as slumberers throughout the city reach for their alarm clocks.