The UIL and school districts can do better work curtailing concussions 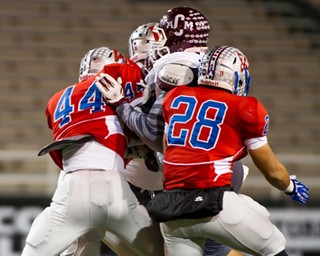 Michelle Trenum’s voice is rising, and it has everything do with her oldest son. From her home in Nokesville, Virginia, she has just read about Cedar Park High School’s touting of the Guardian Cap, a soft-shell outer layer for the helmet reputed by some coaches to prevent football concussions. She is in disbelief.

“You cannot make those claims,” she says of the Guardian Cap’s alleged ability to protect players’ brains. “There is no scientifically valid study that shows any of that stuff works. Any of it.”

Trenum is correct, but this is about more than just the cap.

Her oldest son may have not played for Cedar Park, but Austin Trenum was a high school football player. A fullback and linebacker for the Virginia ’s Brentsville Tigers, the 17-year-old’s tragic death in September 2010 is the definitive example of why factual concussion awareness is so vital. A proper understanding of concussions could have saved Austin’s life.

“I’m not suggesting we ban all football,” says Michelle. “I believe parents have the right to decide if football is right for their children. However, you really need all the information to make that decision. Right now parents aren’t getting it, and that’s what school districts can do better.”

In Texas, reconciling football with safety has resulted in a confused mission for school districts and the University Interscholastic League (UIL), the two entities most responsible for overseeing the care of high school athletes. One side of the mission’s about preserving the sport. The other’s about protecting the player. In an ideal world, the two would go hand in hand with each getting due diligence. But the reality is much more convoluted.

As Cedar Park’s use of the Guardian Cap illustrates, parents and players are not being made properly aware of the truth about what is done to protect students’ health, and it’s putting the wellbeing of many players at risk.

The UIL oversees nearly 1,500 high school varsity teams in Texas – exponentially more when you factor in teams for junior varsity, freshmen, and middle school. Approximately 168,000 students played for a UIL school during the 2012 football season. In light of the ongoing research into the ramifications of concussions, the protection of players’ brains should be a top priority.

Concussions are not a simple bruise to the brain. They are a trauma inflicting damage to cognitive function when the brain collides too violently with the inside wall of the skull. They can result from hits to the head. They can result from hits to the body. Some involve loss of consciousness. Others don’t. The onset of symptoms can be immediate. They can also be delayed. If diagnosed and treated properly, most concussions can be resolved over time. However, more and more research on brain trauma is unveiling a more sinister reality.

According to the Sports Concussion Institute, football players have a 75% chance of sustaining a concussion. Reports by the U.S. Centers for Disease Control and Prevention and the American Journal of Sports Medicine rank football as having the highest rate of incidence for concussions in high school sports, and research suggests the rate could actually be higher due to injuries that go undiagnosed or unreported. The Institute of Medicine recently lamented the dearth of information on the short- and long-term consequences of concussions in youth sports, and this past season has seen high school players Tyler Lewellen, Chad Stover, and Charles Youvella all die from brain injuries sustained during games.

You would think this information would spur the UIL and school districts into implementing the best safety measures. The UIL claims a shortage of trainers to require that teams have one, but statistics contradict that assertion.

Mark Cousins sounds annoyed. At the very least, he’s losing patience. The director of the UIL is doing his best to explain the process by which rules and safety protocol are established for Texas high school athletics, but the whole system just reeks of bureaucracy.

“The UIL doesn’t just make rules,” says Cousins, describing the organization’s chain of procedure in establishing new safety requirements. “We have a process and superintendents and stakeholders and those kinds of things. They bring rules to UIL.”

The primary rule concerning students wishing to play high school football revolves around a single piece of paper: Every student and every student’s parent or guardian must sign an acknowledgement form that gives a very general guideline as to what concussions are, how to prevent them, and how to properly recover from one.

“That’s something that’s mandated by state law,” Cousins explains. “There are specific items in the law that spells out what needs to be on the annual form. It talks about parents’ need to understand that they’ve seen information about concussion prevention, symptoms, treatment, oversight, and guidelines for safely resuming participation.”

The form’s advice for preventing traumatic brain injuries includes practicing safe play, following the rules, and remembering to wear protective equipment, as well as a single sentence on the importance of limiting cognitive stimulation such as texting, watching television, and using a computer.

The form also makes no mention of Second-impact syndrome, a rare but deadly condition wherein a player’s brain swells severely when sustaining a second concussion before fully recovering from its first. Nor does it mention any of the long-term diseases linked to repeated brain injuries: chronic traumatic encephalopathy (CTE), a disease similar to Alzheimer’s found in deceased former NFLers like Mike Webster, Ray Easterling, and Junior Seau, as well as amyotrophic lateral sclerosis (ALS), Parkinson’s, and more.

Trainers on the Sideline

Westlake High’s head coach and athletic director Darren Allman is shocked to hear the UIL doesn’t require a licensed athletic trainer to be on the sideline during football games. “News to me,” he says. He owns no illusions about the sport’s inherent violence.

The information also comes as a surprise to Paul Severt, father of Westlake starting quarterback Jordan Severt. The CFO of Cigna Supplemental Benefits is proud his three sons play football. He wouldn’t mind seeing Jordan spoken in the same sentences as former Westlake quarterbacks Drew Brees and Nick Foles someday, though he’s perfectly satisfied if Jordan’s future at Southern Methodist University is his final chapter. A linebacker in his youth for Memorial High of St. Marys, Ohio, he’s privy to the brutality that exists at the high school level.

“It’s not only concussions,” he says. “You’ve got other types of injuries. You hear some strange things happening sometimes with really bad breaks. All the blood flow’s cut off. You’ve got to get that kid diagnosed immediately. I’m surprised that isn’t a requirement.”

Athletic trainers are essential. They’re on the field. They’re among the players. They watch. They discern. They provide a level of player safety that coaches are incapable of lending. Not only are coaches not medical professionals, a coach’s focus must be on winning the game. The trainer’s objective is protecting the player’s health. Unfortunately, there don’t seem to be enough.

According to the Texas Department of State Health Services, there are 2,994 licensed athletic trainers within the state. Per MaxPreps, a UIL partner that provides high school sports coverage, there are 1,463 Texas high schools with a boys football team.

The UIL also doesn’t keep record of the teams that do have a licensed trainer on staff, so there’s no way of ascertaining how many teams don’t have one, either. According to the National Athletic Trainer’s Association, only 42% of high schools in the country had access to a certified trainer in 2010.

In 2011, the Texas legislature passed House Bill 2038, more commonly known as Natasha’s Law, mandating certain procedures designed to protect the cognitive health of high school student-athletes at public schools. Some of the more prominent requirements include compulsory training for coaches on concussion safety, a return-to-play protocol to be established by each school district, and a physician’s clearance before any player can return to the field following a concussion.

The law, named after safety advocate Natasha Helmick, was meant to provide a base for school districts and the UIL to build upon according to Dr. Theodore Spinks, a 13-year veteran of neurosurgery with several clinics around Austin. Spinks was one of several medical professionals to work with the Texas Legislature in passing Natasha’s Law, but for all the good the law has accomplished, Spinks believes that school districts and the UIL could do more, especially when it comes to educating parents and teens better on the dangers of mismanaging brain injuries.

“You can only put so many things into law, and I’m not sure how much of it should be law versus UIL policy,” says Spinks. “Students are required to sign things saying that they received concussion education, but there’s no real requirement on what that education has to be.”

Perhaps school districts and the UIL could look to the Trenums for advice. In the aftermath of Austin’s death, Michelle’s husband Gil worked through her school board to ensure no parent in Nokesville and its neighboring cities suffers the same fate as her family.

Any student wishing to play a high school sport in the family’s Prince William County must attend an hour-long seminar on concussions upon which they’re accompanied by at least one parent. The session includes an ESPN E:60 report on Preston Plevretes, a former La Salle University football player who has never fully recovered from the mental and physical effects of a concussion he suffered in 2005. Michelle Trenum says the session’s making a difference.

“Schools that just have a piece of paper, are parents checking the box? Yes,” she says. “Are they really making a difference and wanting what’s best for the kids and their brains? No. I believe our lecture trains, and it’s not that hard to do. Our school district implemented it, and last year we educated over 70,000 parents and students. That’s incredible.” 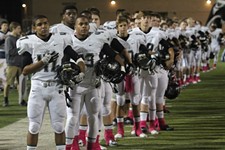 A Walking Contradiction: Texas High Schools, Football, and Concussions
Thousands of students mash helmets every weekend – at what cost?