Texas State Is on the Rise

Apparently there can only be one good team around town 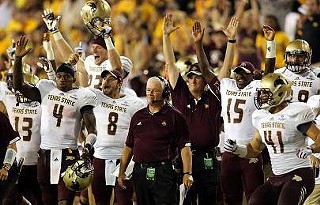 Here’s a challenge for UT football fans: Your team sucks. They don’t know how to tackle, the coaches will (and should) resort to putting a freshman in at quarterback. The athletic director just quit. This will be a losing season and Mack Brown’s last as head coach. It’s time to turn the dial.

The 3-1 Bobcats open Sunbelt Conference play with the Louisiana Ragin’ Cajuns at 6pm Saturday on ESPN3, which is mainly an internet thingy. But KNVA, the CW Austin station, has picked the game up for local broadcast. Watch. Become a fan. Here’s the big irony: The Bobcats will be on TV a lot more these days — on the Longhorn Network!

Why bother to watch these newcomers? Though the Austin and San Antonio media largely haven’t noticed or cared, the Texas State Bobcats are good. I mean really good. Their defense knows how to tackle. The coaches DID put a true freshman in at QB last week, and Tyler Jones rocks. There’s a good chance if that trigger had been pulled a weak earlier the Bobcats would have beaten Texas Tech. I kid you not. Texas State needed just enough offense to give its excellent defense a breather. They found it.

Here’s a prediction: Texas State, in its second year as an FBS team (Big Time Football!) will play in a bowl game. Why? Dennis Franchione is doing the right thing in San Marcos.

Here’s the rub for teams clawing their way up to the big leagues of college football: You have to do it with the dregs — junior college transfers, “trouble” players kicked out of the big school. Jones at QB as a true freshman marks a real move past that for Texas State. Jones led Stephenville to the state title last year and got interest from a lot of schools, including Texas Tech. He chose Texas State because they sold him on leading a “new” team into the future.

Oh, I forgot to mention, the Bobcats beat Wyoming last week despite a three-hour rain/lightning delay. Make that they CRUSHED Wyoming 42-21. The same Cowboys team that put a big scare in Nebraska earlier this season. Texas State has almost as many running threats as Texas. Jones ran for 38 yards in his first carry for the Bobcats. Sophomores Robert Lowe and Chris Nutall are hosses, with 141 and 63 yards respectively against Wyoming.

On defense, Texas State has junior Michael Orakpo, who racked up six tackles, four unassisted against the Cowboys. Does that ring a bell, Longhorn fans? Yep, he’s the lil bro of Brian Orakpo, your former All American and current Washington Redskin.

And here’s the thing. While you (and most of the local media) weren’t paying attention, the school that in my mind will always be known as Southwest Texas State has changed more than its name since winning back-to-back Division II national football championships under Jim Wacker in the early Eighties. The university in San Marcos enrolled 35,568 students this fall. That’s more than Texas Tech, way more than Baylor, and not all that many fewer than UT and Texas A&M. Texas State welcomed more than 5,000 new freshmen, and they’re not just all there to party — about half of them were in the top 25 percent of their high school classes. But they haven’t completely lost their partying skills and tailgating at the enlarged Bobcat Stadium is killing many a brain cell.

The Austin daily made a small concession to the Bobcats this year by including them in their weekly football predictions chart. Not a single sportswriter there gave the 10+ point underdogs a chance of beating Wyoming. And frankly, they don’t seem to really believe Texas State has joined Big Time Football. Consider Kirk Bohls’ deadline story on the Wyoming game filed when the game was 7-7 and in the midst of a three-hour rain delay: "It's not that 2-1 Texas State is a bad football team…" and his final one: "…milestone victory after a convincing 42-21 upset of a solid Wyoming to stamp Texas State as a team on the rise."

Yes, the Bobcats are not a “bad team.” Texas is a bad team. How about watching a winner on the rise? Start by repeating after me: “Eat ‘em up, Cats!” 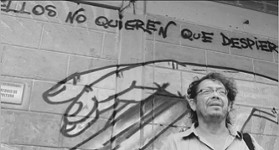