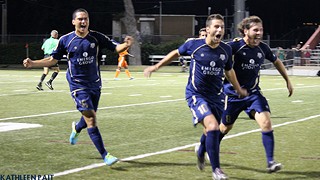 The only goal of the game came on a beautiful volley from distance by Aztex striker Sito Seoane, on a rare throw-in assist by captain Zack Pope, as the Austin Aztex outlasted the Ocean Bay Nor'easters Friday in front of a record crowd at House Park, and earned a spot in tonight's PDL championship final at 7:30pm against perennial power the Thunder Bay Chill.

The Aztex got more good news Saturday, as top scorer Kris Tyrpak and head coach Paul Dalglish were tabbed PDL player of the year and coach of the year, respectively, at the annual PDL end-of-season banquet. There's only one way to round out the weekend now. Go Aztex!

Special credit for Friday's win has to go to Aztex goalkeeper Devin Cook, who made spectacular save after spectacular save to keep Ocean City off the scoreboard. Cook was a finalist for PDL goalie of the year honors, and while he was beaten out by Ottawa's Chad Bush, who recorded nine shutouts in a row to end the season, it's hard to imagine that any keeper, anywhere, could have done a better job than Cook did on the night. In what was clearly the play of the game (Seoane's goal notwithstanding), Ocean City striker Zoncher Dennis shredded an Aztex offside trap in the first half, and broke in on goal all alone, and with the ball at his feet. Cook raced out of his area, dove spreadeagled to stuff Dennis's shot attempt, then managed to get back on his line in time to block a followup shot, and wound up landing against the goalpost, with his body almost entirely inside the goal, but with the ball in his hands, pinned between the ground and the post. It was as good a play as I've ever seen a keeper make.

And while I'm handing out accolades, here's a couple more, for the Austin soccer community as a whole:
The House Park crowd (over 3,000 attendance) was by far the loudest we've had; we even had some call-and-response cheers going on in the second half, between fans on opposite sides of the field. First time I've ever seen that, and it does a long-time soccer fan's heart good to see that kind of enthusiasm in this sometimes laid-back milieu.
And in another key indicator of a maturing soccer community, how about all that homegrown talent?!? By game's end, more than half of the players on the field were kids who grew up learning the game right here in the metro area, in the metaphorical shadow of Longhorn football. Tyrpak, Pope, Cook, Leone Cruz, Andres Cuero, Tucker and Walker Hume, are all local products, and another 15 roster players, by my count, have homegrown connections, through high school, college, or youth soccer in the Centex area. Austin is still football country, but that doesn't mean what it used to.