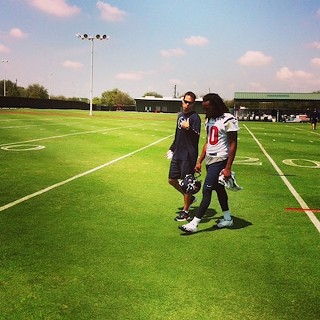 Texans rookies were welcomed to the Lone Star State on Friday by a thunderstorm that kept their first day on the job confined cozily within the practice bubble.

Saturday the sun came out, and practices moved outside. In shorts and jerseys, the future stars of the franchise quickly got their first taste of the balmy air that hovers over the cement grid.

The NFL's new collective bargaining agreement allows for NFL teams to bring in their rookies for mini-camps during one of the two weekends following the NFL draft.

Undrafted free agents and "tryout players" are also brought in during this time. Nine teams had their first real "practice time" with their latest rookie additions last weekend while the Texans were one of the remaining 23 that elected to hold rookie mini-camp at the later date.

The Texans addressed numerous key issues in the 2013 NFL draft, and the group comes in with expectations to contribute as soon as possible. In some cases, that means immediately.

Here are a few initial thoughts.

DeAndre Hopkins was the star of the day, expectedly. The Texans selected Hopkins with their first-round pick in the 2013 NFL draft, and with him come high hopes of a much-needed immediate boost in Houston's aerial attack.

It is asked that reporters not cite specific scheme-related information from training camp, but let's just say that Hopkins was used in a variety of ways, and exhibited really sneaky strength through his in-cuts on digs and skinny posts.

I was a small bit uncomfortable with Hopkins' tendency on Saturday morning to body-catch balls in tight spaces over the middle. There were three times he could have reached out and snatched it, and he didn't. Granted, he made all three receptions.

The third coast is going to love this kid—he'll be keeping it trill with Bun-B and Beyonce soon enough. Swearinger, aka "Jungle Boi," even has a mix tape, and it's actually pretty good.

This kid's a leader. He picked-sixed a ball in practice today, but the most impressive note is that Swearinger leads, and he intimidates like a prison guard. He barks like a junkyard dog at these guys.

Swearinger was the noted emotional leader of a very mean-spirited South Carolina defense in college, and he has assumed that role undeniably among Texans rookies two days in.

Texans fans should be very excited about the prospects of Swearinger's development under a similar veteran leader in free-agent addition Ed Reed.

Bonner had an impressive receiving performance at the NFL combine, and apparently the Texans agree with my assessment. Bonner was used as a jack of all trades in the Jacksonville State offense during college, lining up wide, getting involved in the screen game and reverses—sometimes even lining up in the backfield.

Bonner plays bigger than his 5'10" listing on the rookie camp roster, and he showed great hands all through the day in position and team drills alike. It appears Bonner is in line to receive continued chances to prove his case as a possible early contributor both on offense and special teams.

No. 54— Trevardo Williams, Outside Linebacker

Williams was one player who many likely watched closely to see where he would be lining up in team drills. Williams seems widely thought of as a player who could play both inside and outside linebacker.

Williams lined up outside in every team drill I witnessed him in. It is impossible to tell in drills with no pads, but Williams seemed relatively flexible and fluid crossing over in coverage to the flats against tight ends.

Now we just need to see if he can rush the passer.

No. 57— Sam Montgomery, Outside Linebacker

Montgomery was absent from morning practice from what the Chronicle was told was some sort of back spasm flare-up. The measures seemed very precautionary.

With the pick of UNC tackle Brennan Williams in the same draft, however, many thought of Quessenberry as a more viable candidate for consideration at guard, which is where he lined up at Saturday's morning practice.

According to multiple reporters in attendance, Brennan Williams was injured and "carted off" the field prior my arrival. No details were given in the post-practice interviews by defensive coordinator Wade Phillips or offensive coordinator Rick Dennison.

Update: Williams had his "knee rolled" early in the morning practice, and an MRI prior to afternoon practice showed no damage. The team fully expects Williams to be ready for OTA's in June.

-This running back battle is going to be fun to watch. Between Cierre Wood, Ray Graham, George Winn, Dennis Johnson and Deji Karim (in on veteran tryout), the Texans have an embarrassment of riches in running-back depth to evaluate, and not a single one of them was drafted.

One or more of the runners listed above are sure to get shots elsewhere when cut-downs occur. It will come down to the system-fit.

In a zone-blocking scheme, all four undrafted rookies bring different qualities to the table, but Dennis Johnson (No. 28) had a noticeable one-cut-and-go style we know Coach Gary Kubiak loves.

-Former Kansas State QB and Heisman runner-up Collin Klein is at Texans camp as a tryout player, vying for a fourth or even fifth QB spot. Klein has a hitch in his delivery and appeared sloppy in the practice I took in.

The Losses Pile Up for the Texans

'The NFL Beat': Combine Cliff Notes
Getting caught up on the 2013 NFL draft season